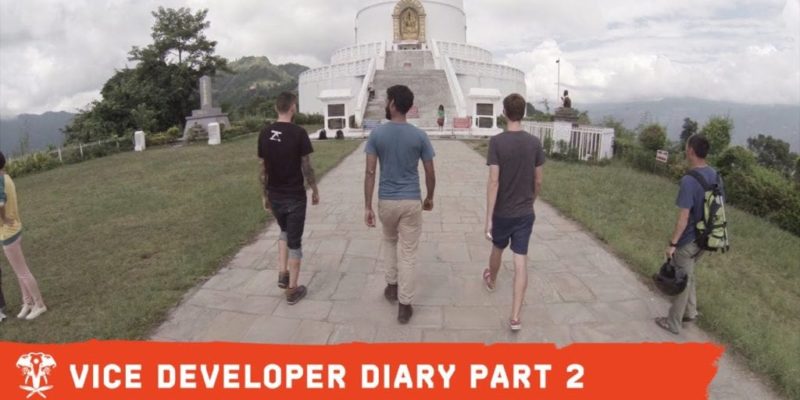 The game will presumably be like this but with more explosions and radio towers.

Part two of the unusually interesting Far Cry 4-meets-Vice meets a trip to Nepal trailer/travelogue series has been released today. In it, our intrepid tourists from the Far Cry 4 development team continue their journey around the country.

In case you’re wondering why they’re in Nepal, it’s because the game is set in a pretend Himalayan based nation called Kyrat and Ubisoft wanted to make sure what they were coming up with was suitably authentic. It’s either that or some of the Far Cry 4 guys fancied visiting Nepal.

Last time, the team learned that the temple sounds they were using in the title were a bit stereotypical and rubbish. We also met a man with an extremely colourful umbrella.

During this new part, there’s quite a bit of travelling on rather dubious-looking vehicles (mind you, most vehicles seem dubious if you’re riding on the roof) along mountain roads that look about two days away from falling apart. In fact at one point they do encounter a road that’s fallen apart (due to an avalanche) and have to do a bit of walking instead.

To top things off, there’s a look at parts of the Nepalese Guerrilla Trail; pathways and tracks that used to be travelling by Nepal’s Maoist rebels. Those rebels actually ended up winning the war and forming a Communist government (several governments over a period of years, really) and turning Nepal into a Republic.

That doesn’t have much to do with Far Cry 4 (due out in November,) but it is an interesting bit of world history. Watch part two, below.