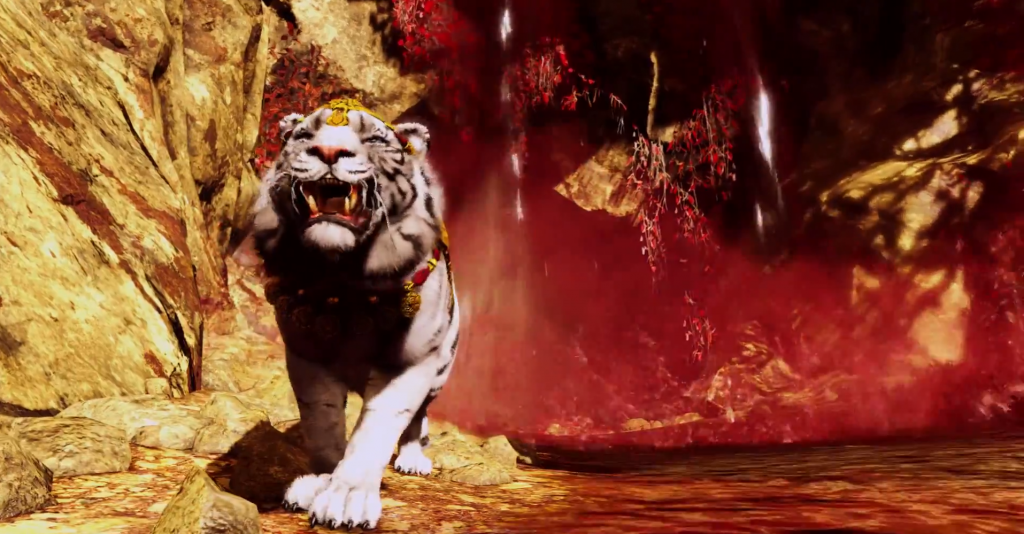 Aww, who’s an ancient and probably culturally sensitive spirit tiger deity? You are! You are!

I have always wanted to fight alongside a mythical spirit tiger, and it looks as if Far Cry 4 will make that a reality. This new Gamescom trailer for the game shows a bit of gameplay from inside the realm of Shangri-La, a very orange and red place that you visit WITH YOUR MIND. Or something.

In this mystical place, “the rules of reality do not apply.” That statement is accompanied by footage of the protagonist shooting a bow at somebody though, which is pretty standard for Far Cry really.

It’s nice that Far Cry 4 includes a tiger who you won’t have to hunt for some sort of minor upgrade. Maybe there’s some kind of animal power that will get the snow leopards on your side too. I’m all about helpful animal chums, and much less about murdering them so I can carry a bit more ammo.

As well as Shangri-La, the trailer has a look at the higher altitudes of Kyrat and reminds everybody that Pagan Min is in charge and isn’t a terribly nice chap. There’s more footage of attacking people while riding elephants (hurrah) and some warnings about avalanches.

Watch the trailer, below. Far Cry 4 will be released in mid November.