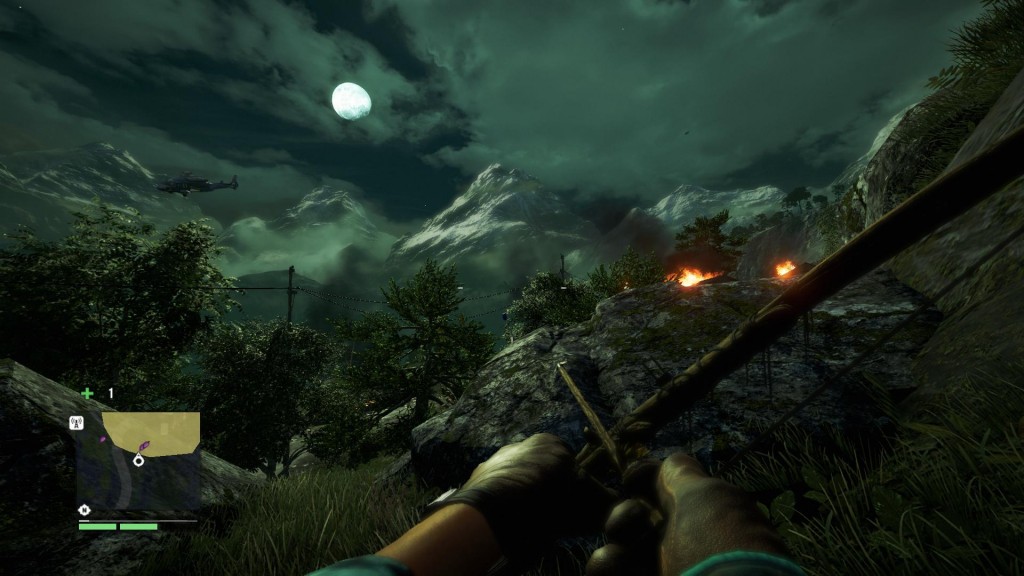 Far Cry 4 has a good line in “Wow, that actually looks lovely.”

So, as per usual, here’s the deal when it comes to hardware: I’m running Far Cry 4 on an i7-3820 CPU with 16GB of RAM, and an Nvidia GTX 670. I’ve got the latest Nvidia drivers, and for the sake of this article, I’m running with sod all open. There are doubtless a few background programs running but in terms of anything that might eat up my computer’s resources we’ve really only got Steam, Uplay, and FRAPS. 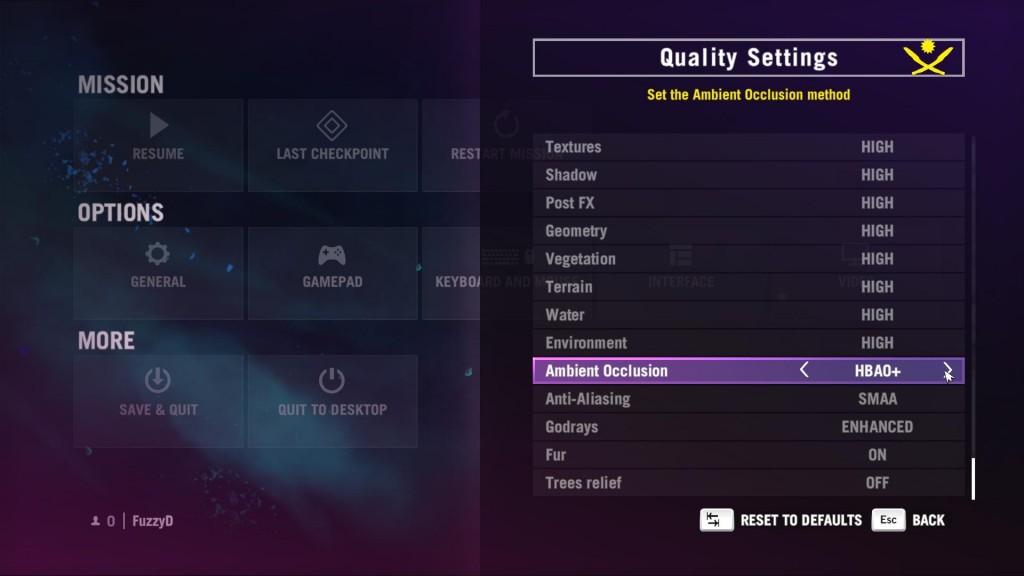 Lots and lots of tweakables. That’s what I like to see in my PC options menus.

I’m not going to go too in-depth into the menu options because Peter did that back when the Ahoy Mateys version of the game leaked onto the internet last week. Not a huge amount has changed, although there’s now an FOV slider and some of the names for the settings have changed. Godrays, for instance, now has “Off”, “Volumetric Fog”, and “Enhanced”, and I’m assuming the latter is basically the same as the previous option of “NVIDIA GODRAYS.”

It’s pretty scalable, with a whole page-and-a-half of options that you can tweak to your liking. Most come in Low, Medium, High, and Ultra settings, although there are a few Very High options scattered about in there too. Amusingly, the Graphics Quality toggle – which automatically sets things up for you – offers an “Nvidia” setting, which is actually above Ultra.

Now, let’s talk numbers. If you’re here hoping I’m going to say it’s an Assassin’s Creed Unity-esque catastrophe, then I’m afraid you’re going to be a bit disappointed, because Far Cry 4 runs really rather well on my hardware. It might be terrible on every other system setup out there – I have no idea! But it’s fine for me. 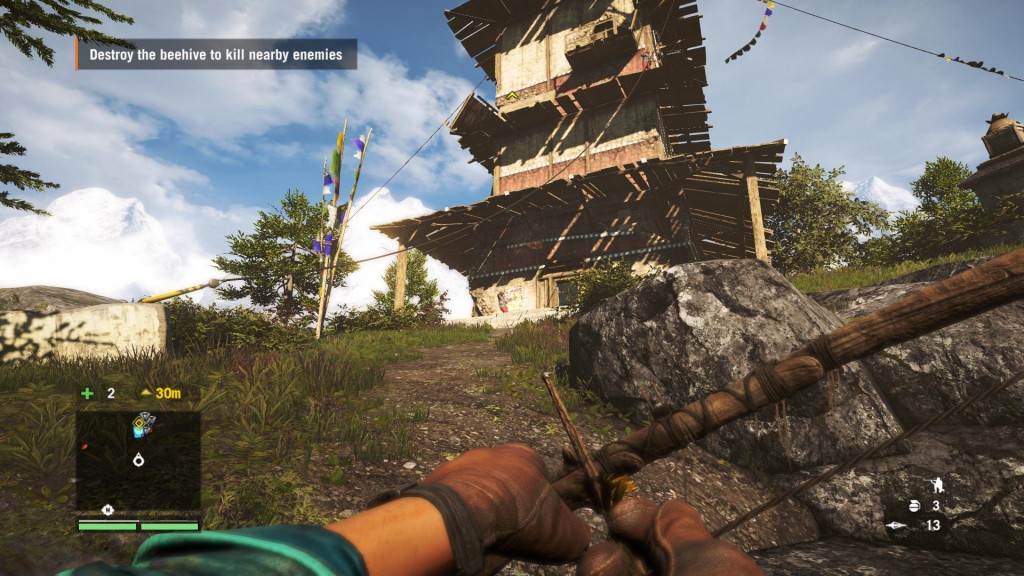 Long-time readers should know by now that I’m a big fan of any game that allows me to weaponise bees. Top marks, Far Cry 4. Top marks.

I ran through the opening tutorial section of the game on High, and the framerate was pretty constant between 40 and 55 – which I consider to be perfectly playable. There were a few drops (which – at a guess – was when it was loading in another chunk of the map, because this tended to only happen when nothing was really going on, but I’d been travelling for a little while) but nothing really worth complaining about, or even remotely surprising.

Interestingly, the in-game cutscenes where you’re talking to someone at length (a mission briefing, say) do seem to be capped at 30 FPS, despite being in-engine and seamlessly integrated into the gameplay. Maybe I’m wrong and these are so intensive they’re dragging things down to 30 but no lower. Maybe FRAPS went a bit nuts. Or maybe they’re locked for some reason.

As an aside, I actually wanted to play the opening with custom graphical settings, but this seemed to trigger a bug in which protagonist Ajay Ghale was suddenly suffering from cataracts. Once I reached Banapur (the first village of the game) I didn’t have this problem anymore and could tweak things however I wanted, but it was a bit odd anyway. 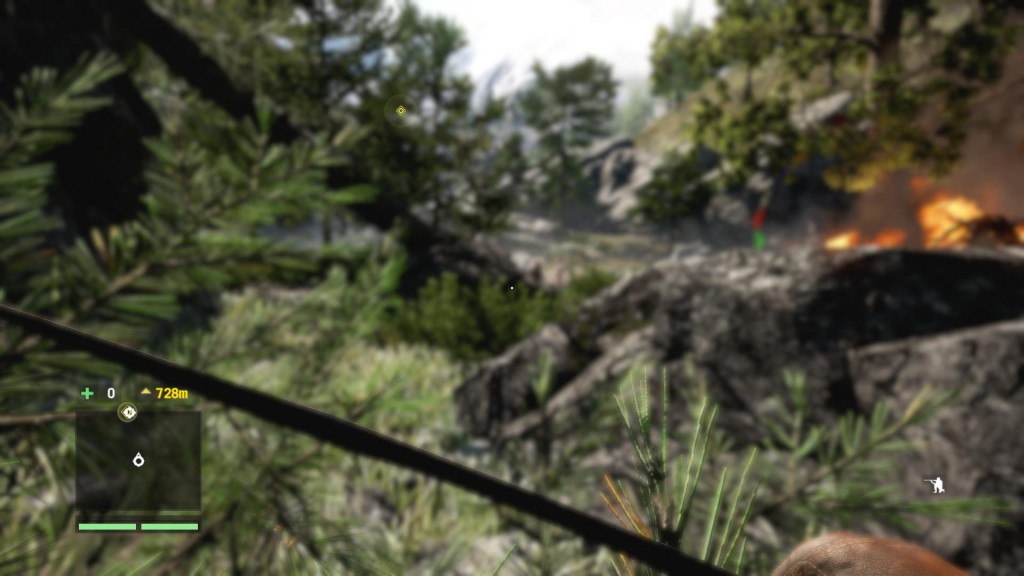 Moving the settings up higher did cause a bit of a drop, though. Ultra was still playable, mostly hanging around at about 35 FPS but with some steeper and more regular drops, while pushing things up to Nvidia settings knocked things down to about 20. I eventually settled on Very High, with HBAO+ and Enhanced Godrays turned on as neither of these seemed to impact performance at all, as far as I noticed. I could probably fiddle with it further to find a better balance, but honestly I don’t care very much. It looks nice, and I’m lazy. Sorry.

How nice does it look? Well, here’s a slew of screenshots. In order: Low, Very High, Ultra, Nvidia. Unless I’ve cocked it up. I do seem to have one more screenshot than I was expecting, but I think that was “Very High with HBAO+ and Enhanced Godrays”, and that shouldn’t be below unless I’m stupid. 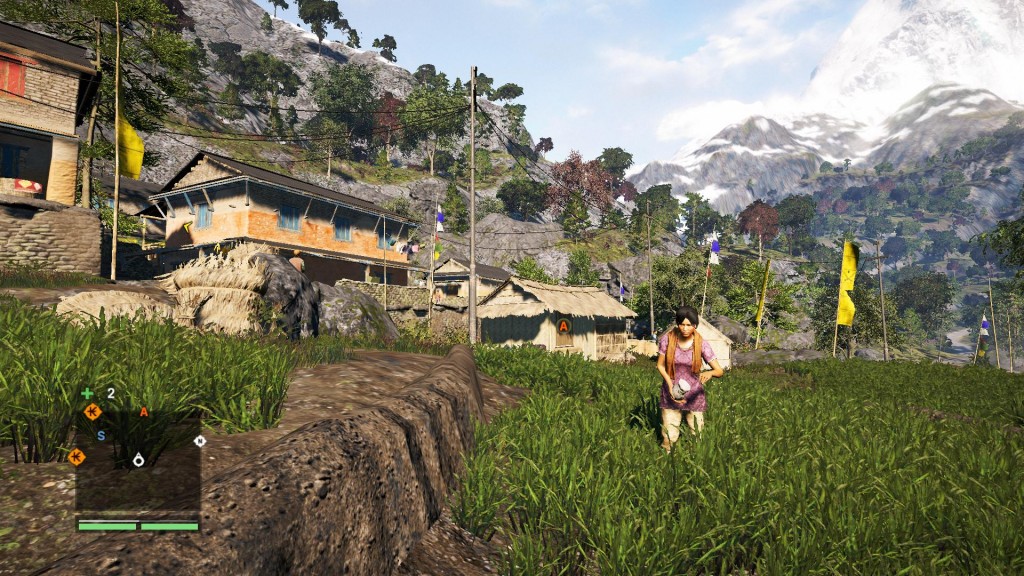 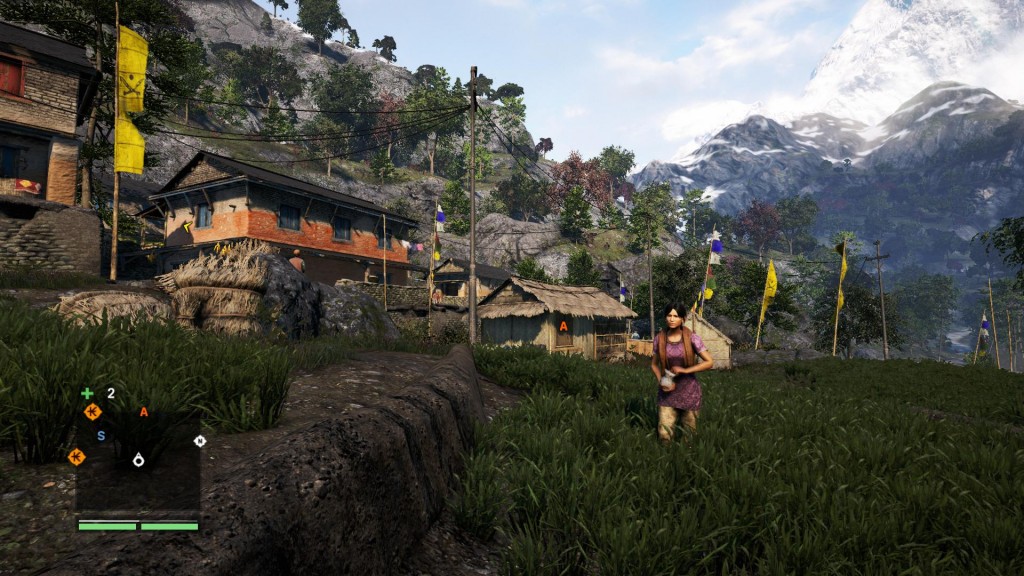 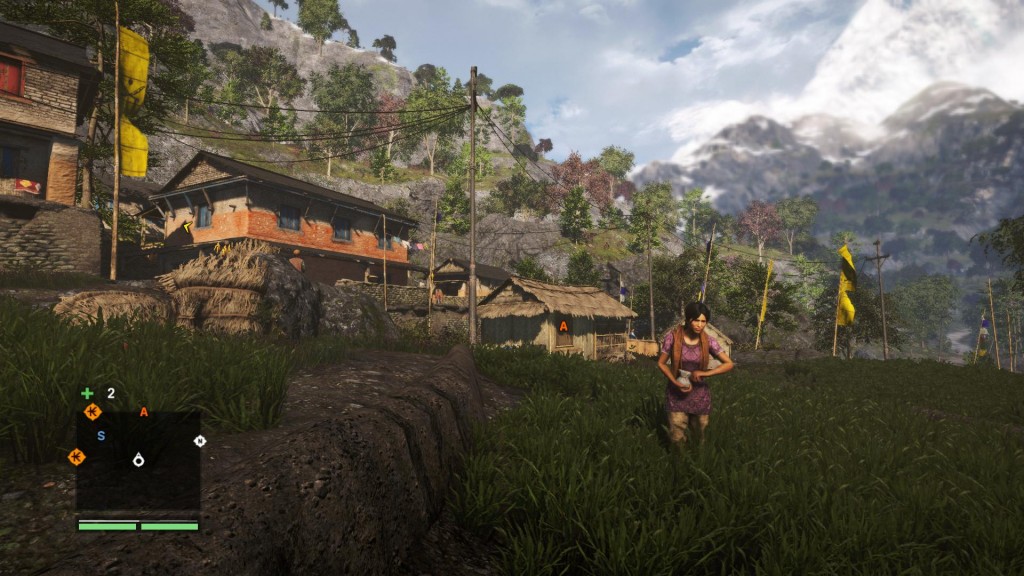 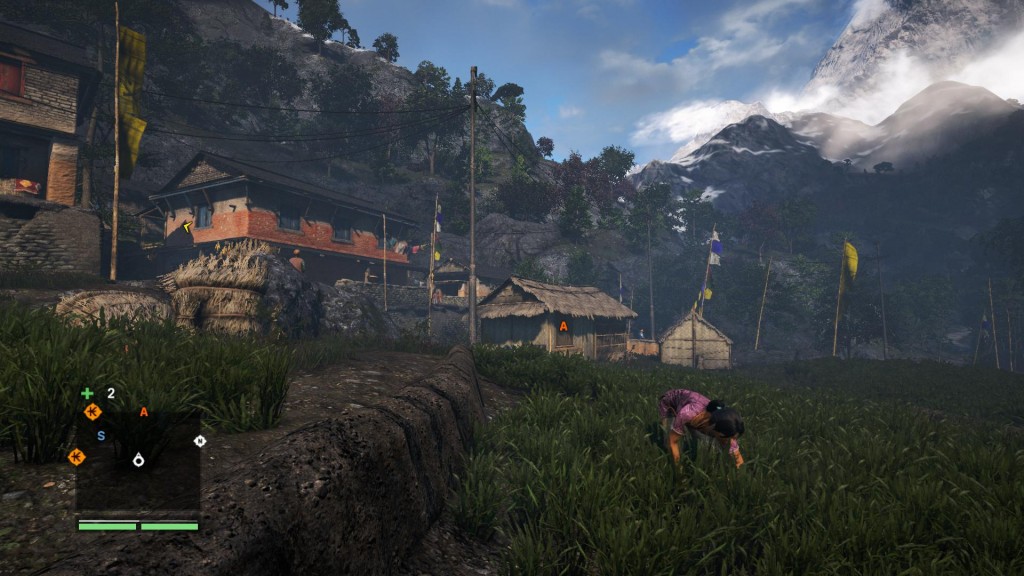 Part of me wonders if it’s actually meant to look better than this, but my system isn’t powerful enough for some of the graphical trickery it’s trying to employ, so it simply isn’t doing it. That, or I’m too dazed by the change in lighting to notice much else of a shift. There are some noticeable differences to the mountains in the background, the shading, and the aliasing (particularly on the distant trees), but I’m finding it really hard to tell specifics because holy shit the lighting.

I ran a few more tests in other areas, and Low definitely looks a bit rough. The higher settings do a good job of dealing with aliasing on the vegetation and just making things look nicer, and the texture work is obviously a lot finer up-close on higher settings than it is on Low, but once you shift off that towards Medium or High the game starts to look rather good. 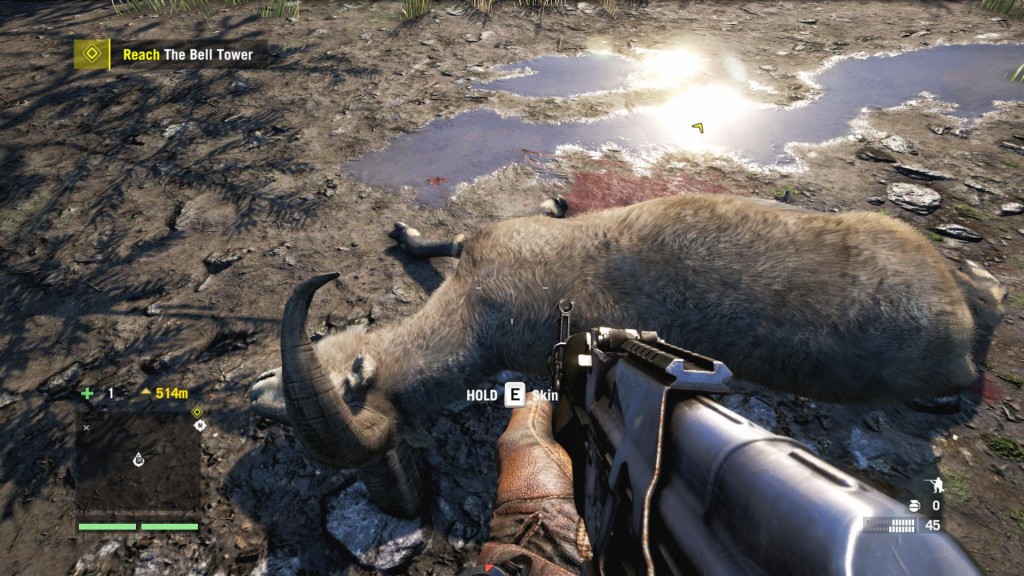 The much-vaunted realistic fur actually looks pretty nice. And no, don’t worry; this is an animal I didn’t actually kill.

So at this stage, no, I don’t have many complaints about the PC port. It looks good, and – on my PC at least – it runs like a framed man. There are a few little niggles that perhaps indicate that the PC version was not the primary build, like how the mousewheel cycles through throwables (grenades, knives, etc.) but it only cycles one way regardless of whether you’re scrolling up or down. I can’t remember if Far Cry 3 did the same thing, but honestly, it’s not exactly a major problem. Equally, the weapon wheel is a bit of a pain in the arse but that can mostly be ignored by using the 1-4 keybinds. Like I said: it doesn’t feel like this was the primary build of the game, but it certainly doesn’t feel like a bad port.

And the game itself? At this point I’m pleased, albeit not overwhelmed with joy, because it’s Far Cry 3 in a different location with some welcome additions. There’s a grappling hook which lets you climb up cliffs and buildings at marked points; there’s the Buzzer (a makeshift helicopter) which makes traversal a bit easier; there’s an Autodrive function in all land vehicles which makes the vehicle follow the roads and lets you focus on either shooting or going and making a cup of tea. While it’s nice to wander off while the game takes you to your next mission or whatever, it does also mean you’ll miss out on a lot; this is a Ubisoft game so there are plenty of collectibles, side-quests, and random events cropping up everywhere. 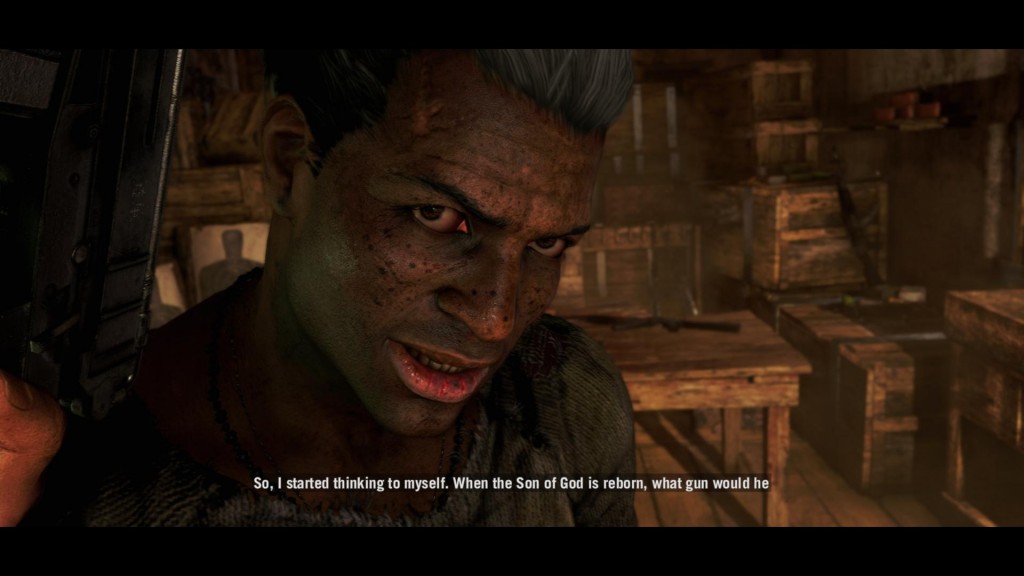 Longinus is great. And, thankfully, he appears to have a few actual missions within the game, so with a bit of luck I’ll be seeing him more than once.

I’m a little sad that the most memorably lunatic characters seem to be the ones with the least screentime. The game opens with your abduction by Pagan Min (which I suspect everyone has seen by now) and continues with you fleeing the compound with the aid of the Golden Path terrorists/freedom fighters. Min himself is still a pretty strong presence, regularly calling you up on your radio for a chat, and he really doesn’t seem to give a shit that you’ve aligned yourself against him. He’s a Joker from Batman: Arkham/Handsome Jack from Borderlands 2 presence, insofar as he’s a relatively unseen villain who’s continually in touch, but is generally jovial and affable. This detracts from some of the Vaas-like insanity and threat, though.

And there are some other great characters. There’s Longinus, the bible-thumping arms dealer, whose introduction has him discussing what gun Jesus would choose when he returns to bring about the Rapture. There’s Pagan Min’s fashion designer who sends you off on errands to hunt rare animals in exchange for the ultimate upgrades to your equipment. There’s the film studio owner who wants you to strap a camera on your head for races and extreme sports-esque videos.

Then there are the more serious characters like Sabal and Amita, the pair who “run” the Golden Path but have very different ideas as to what’s important. Your decisions in their missions dictate objectives in the upcoming missions and change the path of the game somewhat, but unfortunately, they’re both a bit bland when compared to the rest of the cast. They’re also by far the most common faces you’ll see, and there’s no real undercurrent of menace or thinly-veiled lunacy as with Far Cry 3‘s Citra. 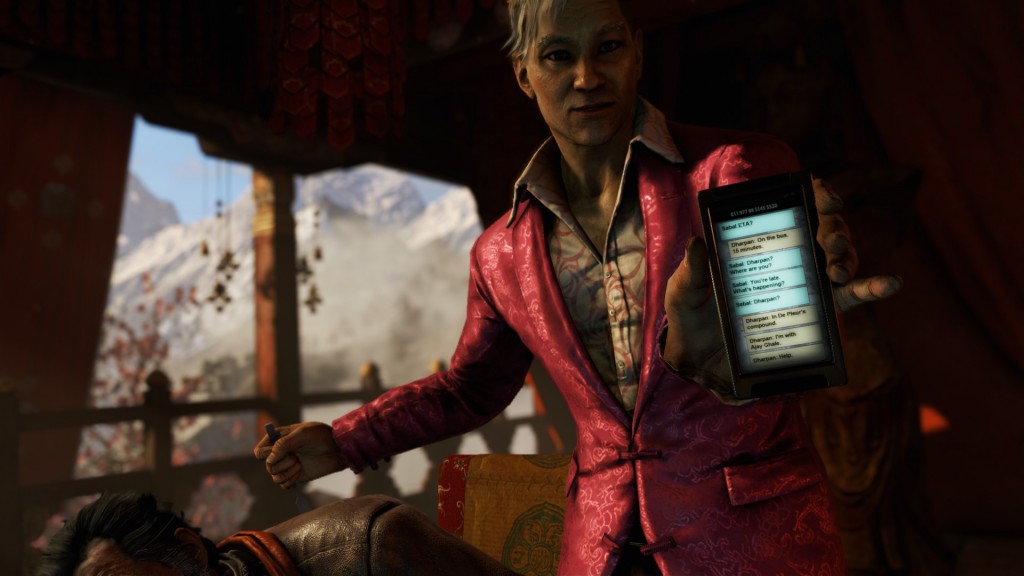 This one’s for the console users who didn’t realise that you can actually read the texts on the cellphone in the intro. Many thanks go to King Min for so kindly holding the phone up for us.

But it’s early hours yet, so that might well change. I’m fairly sure there’s something more going on than has been revealed, at least, and the open-world stealth-action carnage is more than enough to keep me interested right now. I’m shooting people and stabbing people and sneaking around and upgrading weapons and going on side-quests and uncovering more and more about the beautiful, war-torn country of Kyrat. Even if Far Cry 4 never picks up or reaches its predecessor’s heights, any problems I see right now are really down to being compared to its superlative predecessor rather than by being a bad game, and falling a little short when compared to Far Cry 3 is hardly a disaster.

And now, if you’ll excuse me, I’m off to play more. I’m having a rather good time and I’d quite like to get the full review done before Dragon Age: Inquisition code turns up. 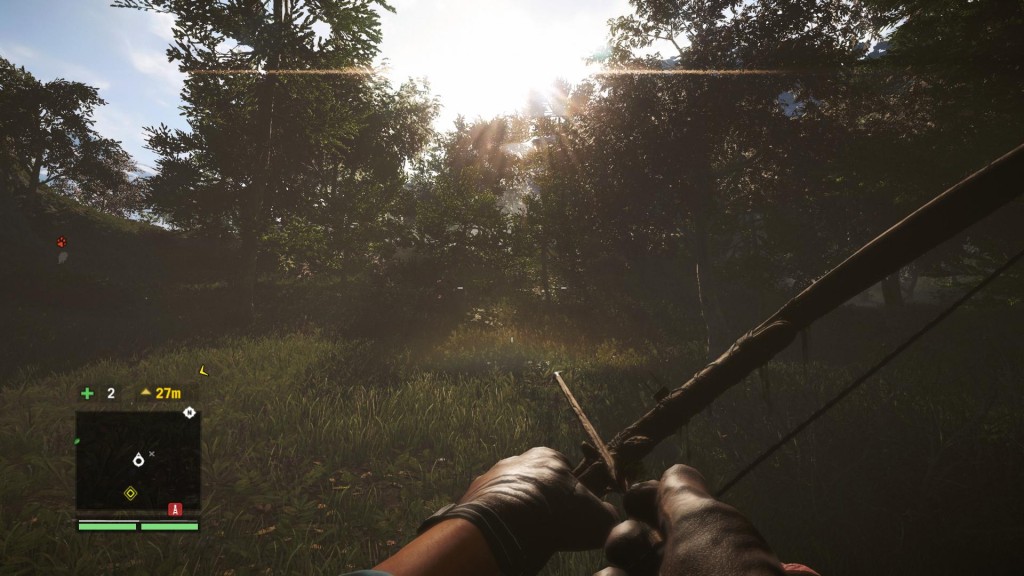 Oh, go on then. One last pretty picture.

By Jason Rodriguez18 hours ago
Features