Far Cry is an unusual series, insofar as none of the games have borne much more than a passing resemblance to each other. The first was a fairly standard shooter with the caveat that it was in a relatively open environment, letting you approach the otherwise-linear levels and objectives from all sorts of different directions, both in terms of orientation and in terms of tactics. The second was a psychologically brutal take on Heart of Darkness which shoved you into a genuinely open world, but had the minor problem that it was basically no fun whatsoever to play. 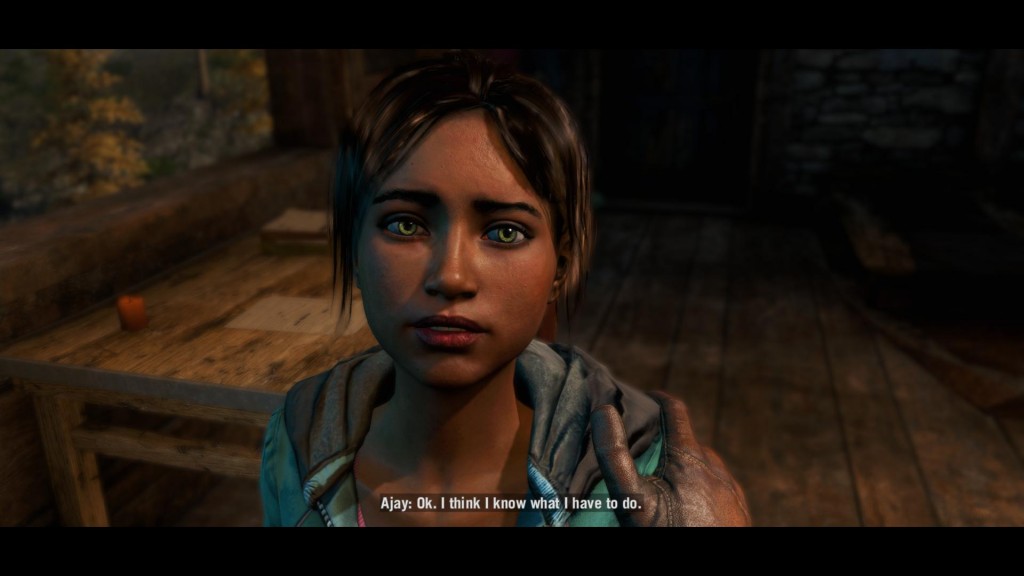 The third fixed this. It took us back to pretty tropical archipelagos and added in crazy characters, skill trees, side-quests, hunting, and the concept of capturing territory via taking on outposts and unlocking radio towers. It was beautiful and brilliant and well-written and clever and I loved basically every minute of it, although quite a lot of people apparently disagree with me that it’s either well-written or clever. Fair enough. Opinions! 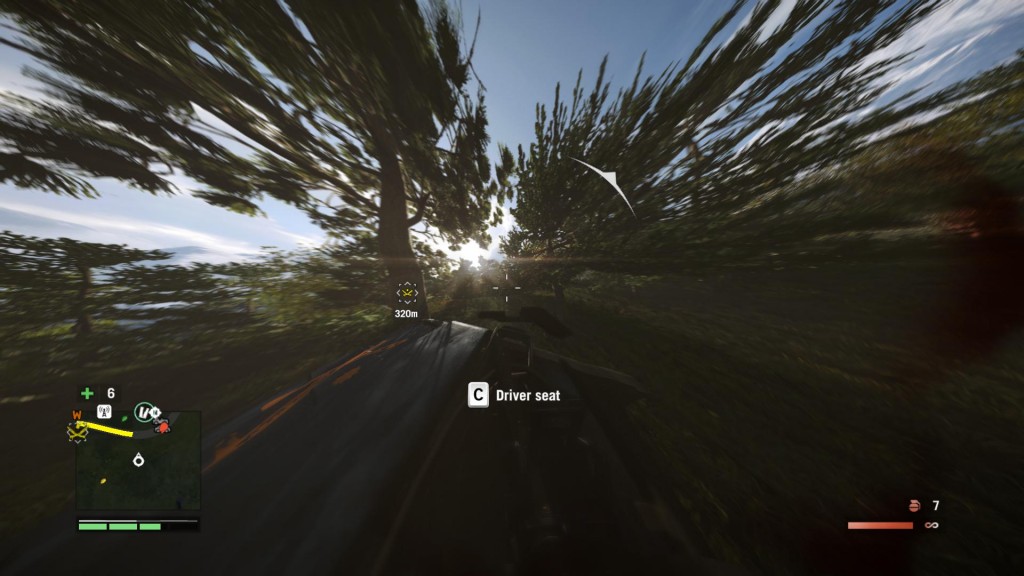 It’s not literally Far Cry 3 again, obviously. I don’t remember Far Cry 3 losing its shit over the FOV, for instance, which Far Cry 4 did on one or two occasions.

In Far Cry 3 you were Jason Brody, an American tourist who winds up in a foreign land that’s going through hell. His friends are kidnapped by a psychotic pirate, and he has to team up with the local tribe to fight back.

In Far Cry 4 you are Ajay Ghale, an American tourist who heads to a foreign land to spread his mother’s ashes, but it’s going through hell. There’s a psychotic dictator running the place, and Ghale has to team up with the local resistance force to fight back.

From those humble beginnings you complete side-quests for an increasingly zany cast of characters, climb radio towers to reveal more of the map, capture outposts to create more fast-travel points and open up more side missions, unlock skill trees to become a more efficient mass-murderer, and hunt animals to let you carry more ammunition and loot. And if you can’t tell whether I’m talking about Far Cry 3 or Far Cry 4, that’s pretty much my point. 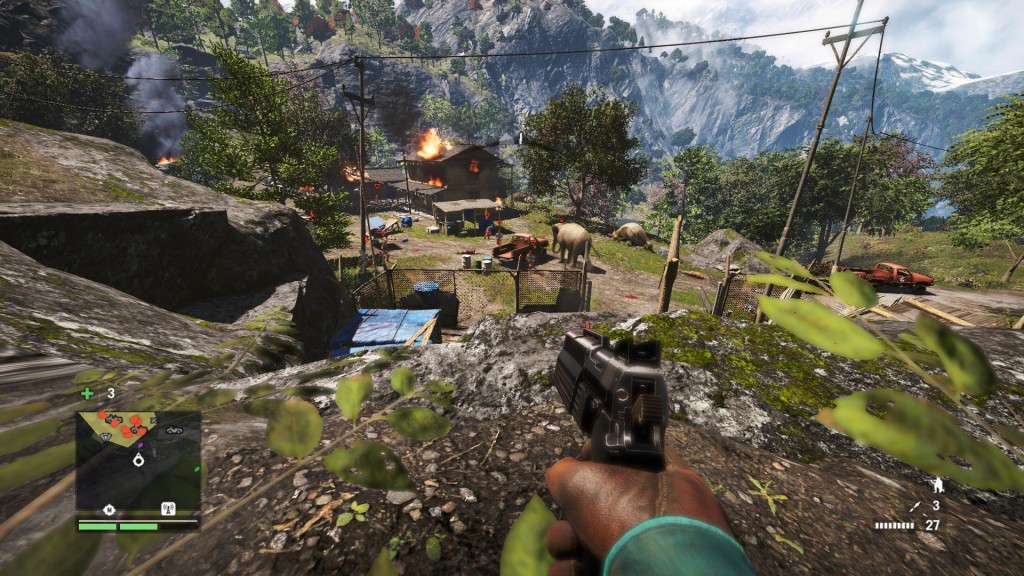 It does all of this very well, at least; better than its predecessor in most respects. The mountainous region of Kyrat is gargantuan, and exploring it is a real treat due to the extra traversal options offered by having a grappling hook and access to gyrocopters. It’s also a visually sumptuous country, with grassy lowlands and forests giving way to tundra and snowy mountain peaks as you fight your way further in.

The wildlife has also been heavily expanded, and doesn’t just work on the “carnivore” and “herbivore” system from before. You’ll see an awful lot of unscripted wildlife interactions taking place, with eagles attacking smaller herbivores like pigs and tapirs, vultures heading to corpses, predators fighting each other over remains, and the like. This occasionally results in some genuinely unexpected gameplay moments, too; rhinos spooked by gunfire might stampede and start knocking over trucks, and starting a firefight in an area full of potentially dangerous animals is risky business. 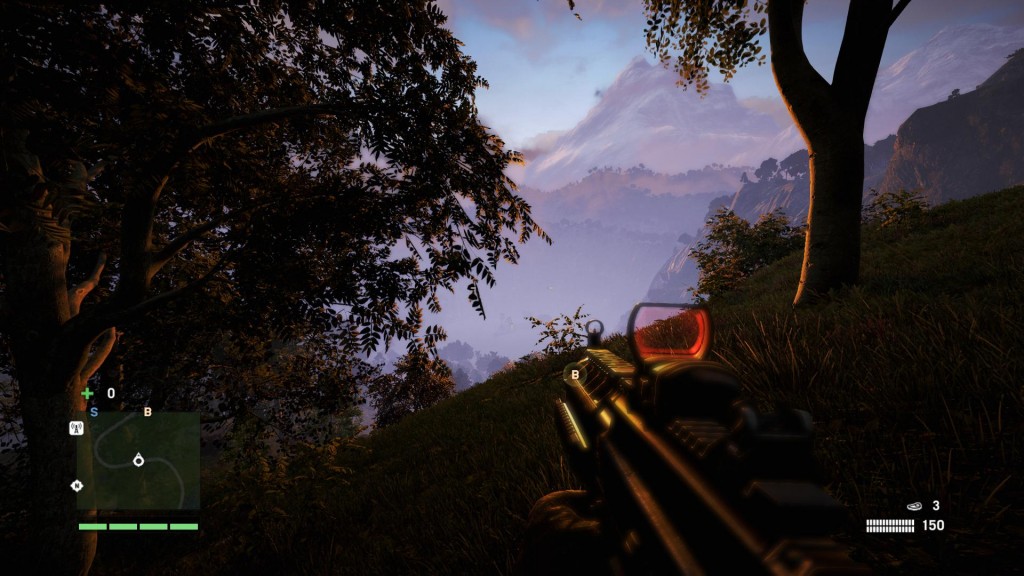 It really is a staggeringly beautiful game. Some moments – unscripted ones, mind you – are just breathtaking.

The world is, I think, where most of the work on Far Cry 4 went. The actual “game” really is pretty much the same as Far Cry 3 with a few fairly negligible improvements, while Kyrat itself is vibrant and beautiful and full of life. A few years back I spent some time in China, and the fictional kingdom of Kyrat is really, really reminiscent of a few places I visited near the Tibetan border. The decorations, and the lighting, and… yes. I saw less gunfights, but that aside, it’ll give you a pretty authentic taste of foreign lands.

Minus the shits. Far Cry 4 probably won’t give you the shits. There’s a box quote for you, Ubisoft. 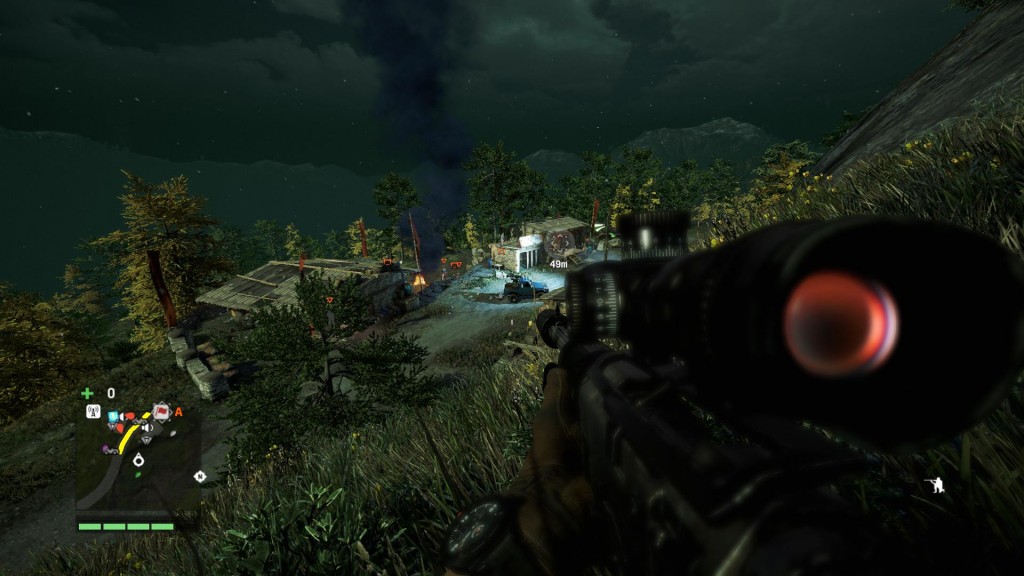 So many possibilities for tearing this place down. So little time.

But it almost certainly won’t give you the same buzz as Far Cry 3 did, because – environment aside – it’s the sort of thing we’ve come to expect from a sequel to a major franchise. There are some minor refinements, but no real surprises. It has another go at similar themes to Far Cry 3, but generally hits them with less success; the same goes for the characters, the situations, and the plotting. There are some fantastic moments, and Pagan Min is a wonderful character, but Far Cry 4 doesn’t quite live up to its predecessors heights. Whether that’s because it’s not as good, or whether it’s because I’ve seen all of this before, I don’t know.

I hasten to add that none of this means it’s bad, because it’s really not. The weapons are slick and customisable, and there’s a tangible benefit to completing side missions and activities. You might do a race because you desperately need the money for that new gun you’ve been eyeing, or you might be attacking an outpost because you need a nearby fast travel point before attempting the next campaign mission. You might be hunting because your wallet is nearly full, or searching for hidden Lost Letters to learn some more of the game’s backstory. 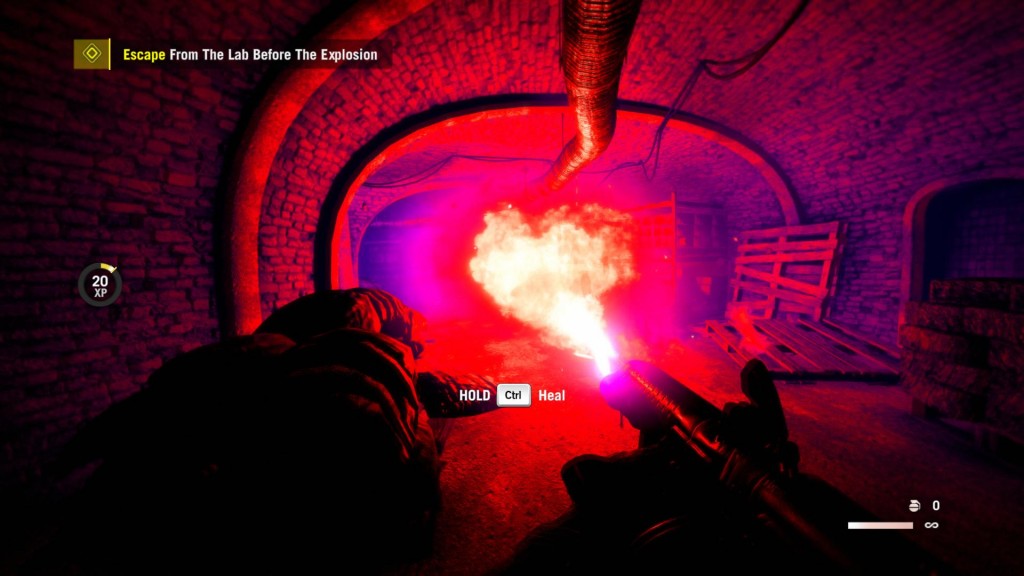 The trippy missions tend to have some wonderfully psychedelic music playing in the background, adding to the fun.

Some of the new missions and activities are really, really good, too. The Shangri-La segments – hallucinogenic descents into an otherwordly, pseudo-imaginary history, where you fight demons with the aid of a magic spirit tiger – are more fun to imagine than they are to actually play, but the missions involving a pair of British, uh… “horticulture experts”… provide a more entertaining take on tripping your way through Kyrat.

The Arena is probably the stand-out inclusion, though, giving you the opportunity to take on waves of enemies in an attempt to rise up the ranks. The combat is as excellent as ever and the Arena provides a raw, “safe” environment to try out new weapons and strategies, or just fight lots of enemies with no penalty for losing. 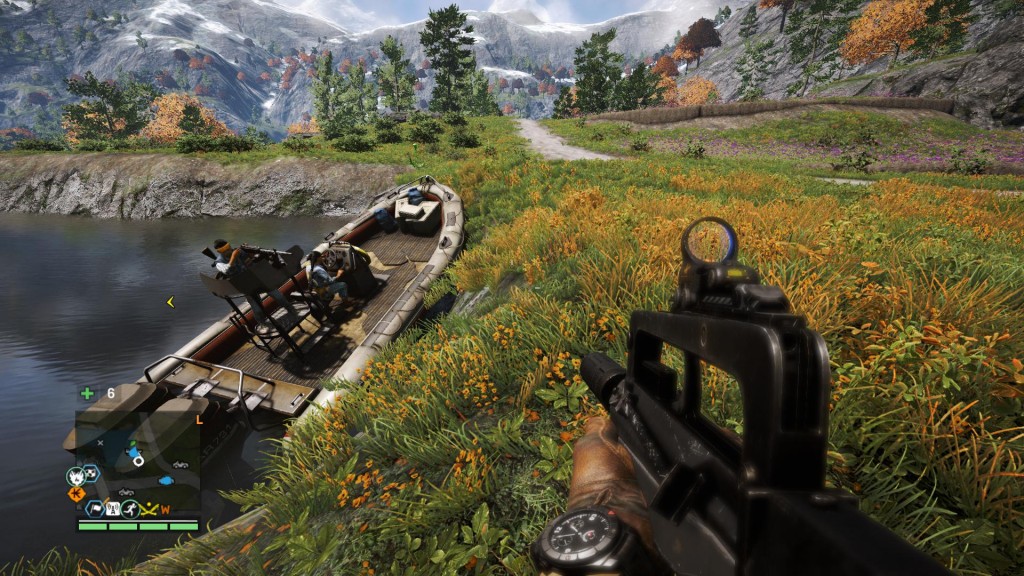 Something else that’s just like Far Cry 3: NPCs cannot drive for shit.

But as with its predecessor, Far Cry 4 is at its absolute best when you’ve got the freedom to really run riot and play how you want. The moments I remember are when I climbed up a cliff to reach a base, shimmed along a ledge, and generally took the long way around to get into a vantage point over it, undetected. I surveyed it with binoculars, picking out the guards. I readied my sniper rifle. I took aim.

I got attacked from behind by a fucking snow leopard. I turned around, switched to my assault rifle, drove it away… and then remembered that my assault rifle wasn’t silenced and I’d inadvertently alerted the entire base to my presence. 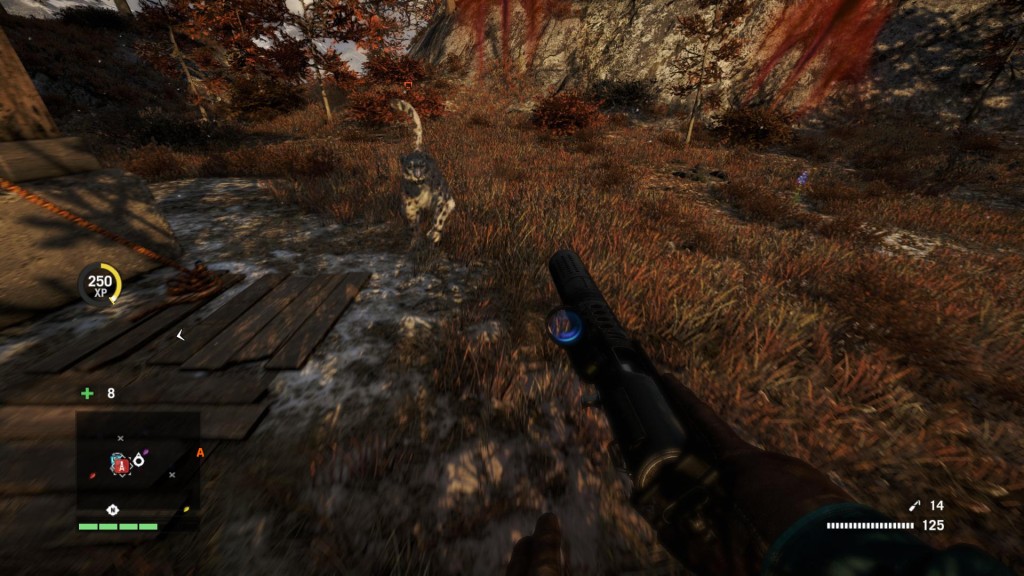 Any guilt I had over murdering wild animals faded pretty quickly, because it turns out most of them are highly capable and entirely willing to murder me first. Screw leopards. Screw honey badgers. And rhinos? Don’t talk to me about rhinos.

Or there’s the occasion when I attacked a different outpost by accidentally stumbling into it (off a cliff, probably while running away from an eagle) and silencing the first guard with a bow before he could raise the alarm. With absolutely no targets marked, no idea of the base’s layout, and no ammunition or health thanks to what I’d previously been doing, I had to sneak around carefully, picking off guards with the bow and retrieving each of my remaining two arrows as quickly and safely as possible. It was tense and desperate and wonderful.

The problem with all of this is what I’ve been saying all along: you can do all of that in Far Cry 3. It offers the same experiences. It does a few better and there are some excellent additions here, but this is a “true” sequel rather than another reinvention of the series, and that means this sort of thing isn’t as fresh or exciting as it was the first time. The co-op is a nice touch, but unless you’ve got a friend to play with continually, it’s going to be more of an occasional boon than a major selling point. There’s a distinct lack of quick-time events, barring when a wild animal is viciously savaging your face. There are plenty of genuine improvements. 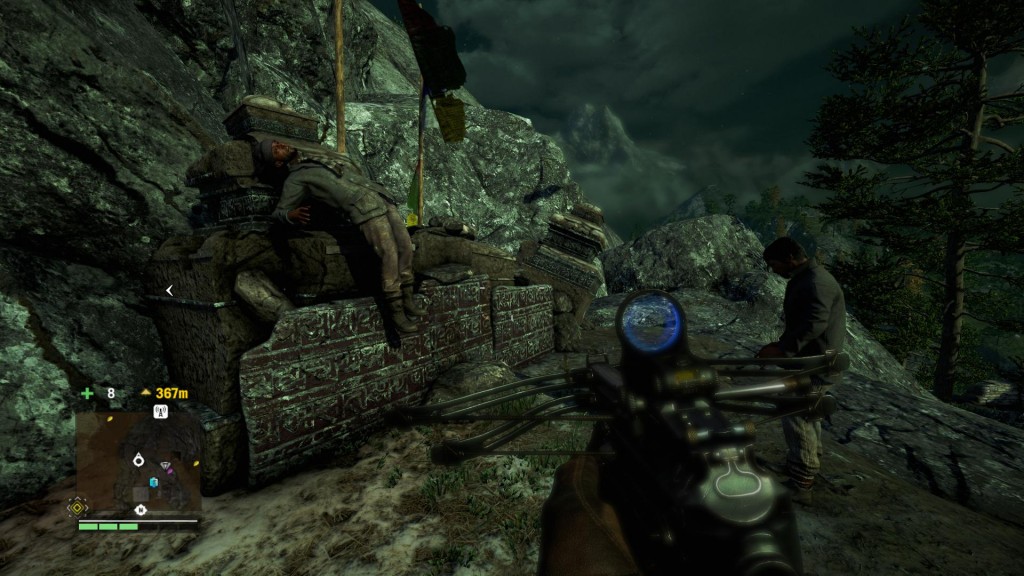 This potentially touching moment – a man weeping over the broken body of his friend, which I stumbled upon entirely by accident – was slightly marred/made significantly more hilarious by an eagle attempting to savage him moments later.

So don’t get me wrong: Far Cry 4 is a wonderful game. It’s beautiful. It has fantastic gunplay and marries stealth with all-guns-blazing action more successfully than anything in recent memory. It’s got a vast, lovingly crafted open world hiding all sorts of secrets, cleverly hidden locations, and objects. It’s got an ecosystem that feels alive, and there are randomly-generated side-quests – maybe to chase down a courier, maybe to destroy or hijack a truck, maybe to rescue a hostage undetected – all over the place.

But it’s still very clearly designed for the people who really want to play Far Cry 3 again, without actually playing Far Cry 3 again. Right now, Ubisoft can get away with that; I’m certainly not fed up with a sandbox that’s this carefully designed and this full of distracting entertainment. If the inevitable Far Cry 5 doesn’t actually make a few big changes to freshen things up, though, I worry that we’re in for another annual series that’ll be milked dry over the coming decade – and that’s something I really don’t want to see.