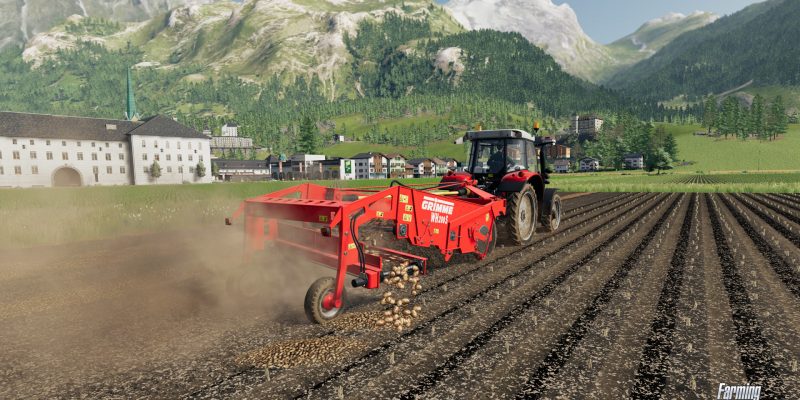 Farming isn’t the cleanest job on the planet. Often, you’ll find yourself getting right down into the grime. How about using some GRIMME to make life easier? That’s what Giants Software is going to let virtual farmers do later this month with the arrival of the new GRIMME machinery expansion pack for Farming Simulator 19.

This new expansion pack for Farming Simulator 19 contains 14 pieces of new machinery for players to enjoy. The entire pack is dedicated to enthusiasts of potato farming, as all of the GRIMME machinery is specialized for that form of agriculture.

Developed in tandem with the Peppe978-Team FSI Modding, this pack contains 13 “authentic and top-class machines” from German manufacturer GRIMME and the bonus Lizard Conveyor Belt, which rounds up the count to 14.

There are three GRIMME weeders, along with two types of potato planters, four potato harvesters, two transport belts, and two trailers. The trailers and weeders can be used for any crop type, but everything else clearly has potatoes in mind. So, if you have yet to try out potato farming in Farming Simulator 19 or want to expand on it extensively, now you’ll have a whole new slew of tools to conduct business around your farm.

The new GRIMME Pack for Farming Simulator 19 will be released on January 21 for the price of $4.99 USD. Pre-orders are open, though players who have bought the Season Pass will get to enjoy the new content immediately.

As Giants continues to actively support Farming Simulator 19, there’s been no official news from the studio on what the next big entry in the series will be or when it will come. It’s now been over two years since FS19‘s release, so the next game is a long time coming. Even so, there’s still new content in the existing game to enjoy. The recently released Alpine Farming pack added a new map and a wide variety of new machinery. There’s also the free Precision Farming DLC, which increases the realism factor of the game’s mechanics extensively.