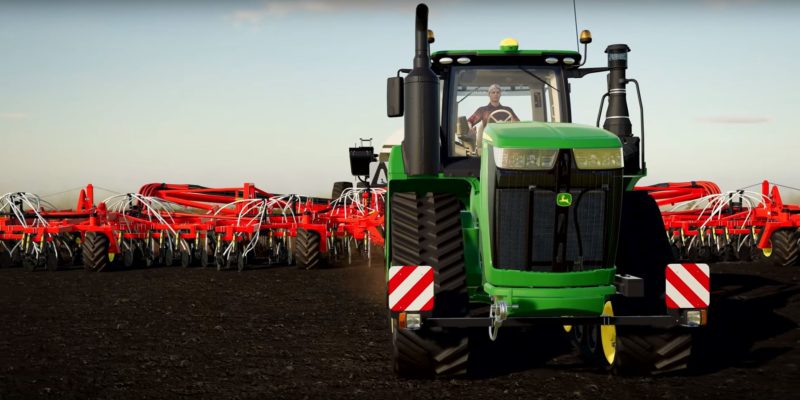 Giants Software has formally revealed the next paid-DLC pack that will be cropping up in Farming Simulator 19 — the Bourgault Pack. This new DLC pack features seven pieces fo new farming implements, all of which are modeled after the real-world inventions of Bourgault Industries. Bourgault is a Canada-based company that has several decades worth of history in creating farming machinery. Now, some of their creations are making into the virtual world.

All of the new farming implements in this pack fall into three distinct categories: seeders, weeders, and cultivators. Thus, you’ll be making use of these new tools to prepare your fields for planting, embedding the seeds, and keeping them safe from nefarious weeds once the seedlings begin to mature.

Here is some of the new machinery in action:

In addition to the new tools from Bourgault, Giants has also thrown in an extra bone to really spice up this new DLC pack — some USA love. Yet another John Deere tractor will officially be added into the game with this new pack: the John Deere 9RX. As seen very briefly in the trailer, the 9RX is a massive, tractor that drives on four independent tracks rather than wheels. This behemoth boasts capabilities as high as 670HP (horsepower), which means it will have no trouble pulling even the largest implements in Farming Simulator 19. Considering that the new Bourgault tools are pretty girthy themselves, they should make quite the pairing with the new John Deere tractor.

The Bourgault Pack will roll its way into Farming Simulator 19 on March 10, 2020, for a reasonable $7.99. Pre-orders have been opened.

What’s on the horizon for Farming Simulator 19?

A few weeks ago, Giants announced that it would not be releasing a new version of Farming Simulator this year. A release was expected by fans given the series’ pattern of an annual release schedule for the past several years. Instead, the developers did mention that three new DLC packs would be released for FS19 throughout the year.

Seeing that this Bourgault Pack is the first set of paid-DLC to be announced since the release of the Platinum Expansion last year, it may be safe to say that this new pack is really indeed the first of the aforementioned 2020 collection of DLC for FS19. That said, be on the lookout for the remaining two announcements as the year progresses. Having mentioned the Platinum Expansion, Giants has confirmed that a new patch for it will be released on February 27, 2020. This will bring it up to version 1.2. Patch notes have not yet been revealed, however. Thus, it’s currently anyone’s guess what the new patch is going to do.

In more recent news, Giants Software has announced that it’s expanding its operations outside of Europe for the first time by establishing a new team in Chicago, Illinois, USA. It will be interesting to see if this has a big effect on the next Farming Simulator entry, whenever it may release.