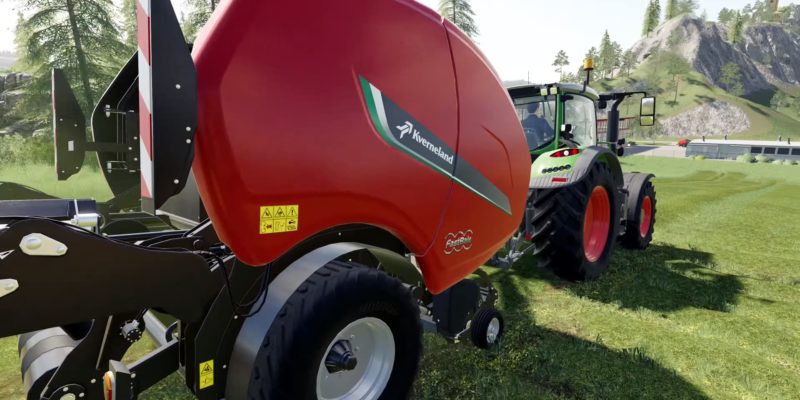 Farming Simulator 19 developer Giants Software has never been shy when it comes to DLC. Its ace farming game already has its fair share of DLC as well as the Platinum Expansion pack. Now, the latest addition to Giant’s ever-growing farming franchise, the Kverneland & Vicon Equipment Pack, is coming June 16.

The new DLC pack does not make any gameplay changes but instead adds a bunch of equipment for players to use. As the name would suggest, these are made by Kverneland and Vicon, two of the leading producers of agricultural machinery worldwide. The new reveal teaser trailer showcases some of the equipment you can expect to get your hands on.

When it releases, this DLC will add a total of 20 new pieces of equipment to the game. This includes various mowers, balers, windrowers, seeders, and much more. For detailed information, you can check out the Steam page, which lists every piece of equipment in the pack.

Unfortunately, the PC version does not have a Season Pass like its console counterparts. This means that anyone interested will have to spend the full $14.99 (or your regional equivalent) to access the new machinery. However, given the vast modding community found on PC, the need for the DLC in the first place is debatable.

The Kverneland and Vicon Equipment Pack will be available regardless of where you brought your game from. Be it Steam, the Epic Games Store, or Stadia, you are covered. Also, Stadia owners won’t have to worry about being cut off from their friends, as full PC crossplay is supported in Farming Simulator 19.

However, this crossplay is slightly limited, as the Google Stadia version has zero mod support. While all official DLC like the Kverneland Equipment Pack is fine, any installed mods will automatically disable crossplay with Stadia players.