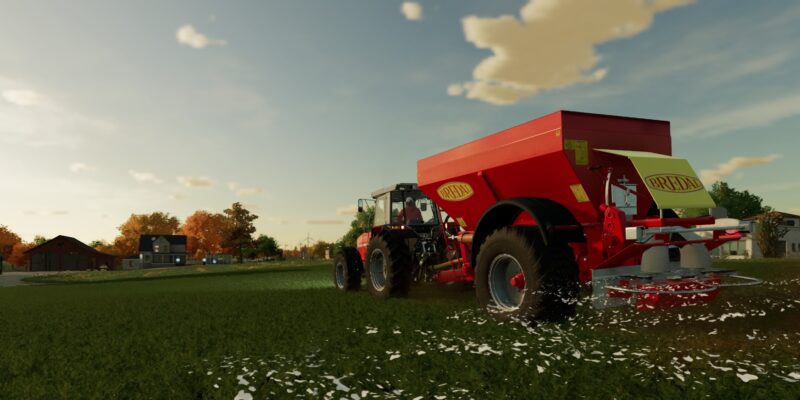 Giants Software has rolled out both a new patch and a new free content update to the ever-popular Farming Simulator 22. The new patch fixes various bugs and makes some minor new additions to the sim, while the new content update brings in brand new machinery and features. Version 1.3 of Faming Simulator 22 fixes various bugs such as sound issues, some graphical oddities, and bugged gameplay features, among other minor things. The most remarkable new thing has to do with the release of the second free content update for the sim.

This new content update contains eight new pieces of farming equipment, including two new machines, and six implements. Giants teamed up with Dutch manufacturer Ploeger to introduce the AT5104  LNMS  to the game before it even launches on the real-world market.

Ploeger’s new machine is a four-wheeled manure spreader. Using it will generate more crop yield from a given field. Going hand-in-hand with this manure spreader are the new IDEAL PL and IDEAL ParaLevel combine harvesters from Massey Ferguson and Fendt, respectively. While there are already a handful of harvesters in the sim, what makes these two stand out is their electric slope compensation feature. This allows the header of the harvester to dynamically and automatically tilt to match the degree of a sloped field, thus leading to proper crop capture. No doubt, more machines will make use of this in future updates.

You can actually see how it works in the short trailer that Giants released to show off all the new content from this update (starting at 0:19):

The other new bits of Farming Simulator 22 content from this update include headers for both the aforementioned harvesters, along with a fertilizer/herbicide sprayer from HARDI, a high-capacity grain trailer from Krampe, and a new tank trailer from Garant Kotte.

While all this new machinery has been patched into Farming Simulator 22 for free, they will still cost in-game money. What is entirely free are the new clothing options that have been added in for character customization. The clothing is based on Giants’ new line of real-world Farming Simulator branded merch.