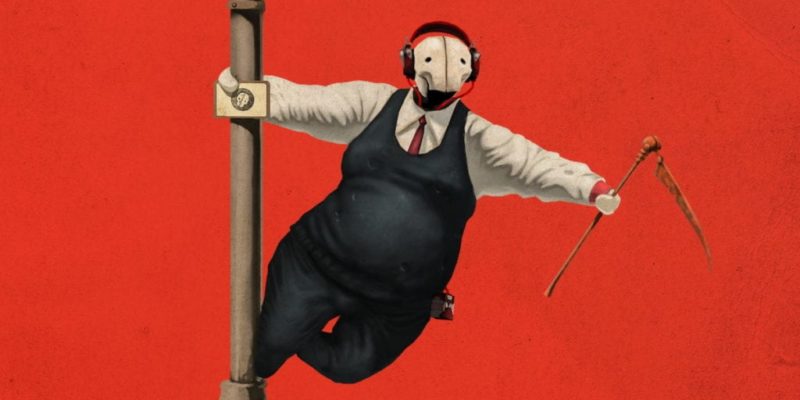 I’m no stranger to the puzzle genre. It’s not necessarily my go-to when it comes time to sit down, play something, and decompress, though. Instead, this is the style of game that I like to play to provide my brain the problem-solving fix it needs. Felix the Reaper fits the mold of those previous endeavors, having a quirky design and attitude while being chock-full of head-scratching moments.

Felix the Reaper is most definitely a wolf in sheep’s clothing. For starters, the art style is reminiscent of a Tim Burton film. I couldn’t help compare character designs to the likes of The Nightmare Before Christmas or The Corpse Bride. Similarly, the tone is often comical, mixed with a little bit of grim. Unlike the aforementioned films, however, Felix the Reaper doesn’t shy away from on-screen violence. You’ll see decapitations, bludgeonings, and blood spatter during your time as an up-and-coming reaper. 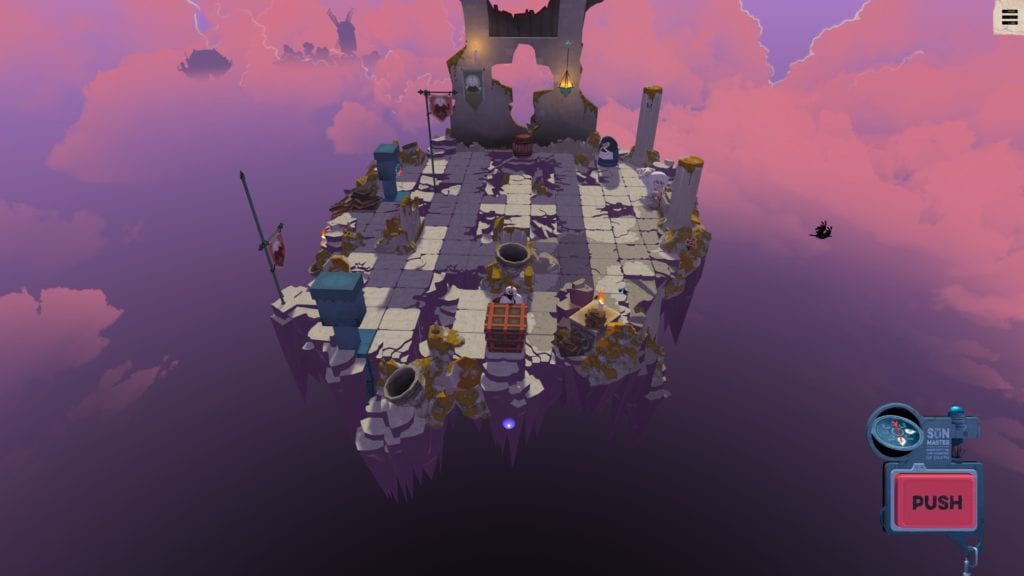 Felix himself is a reaper in training, tasked with going out and completing his reaping missions in the name of The Ministry of Death. The victims are just a number on his to-do list for the day: “make this hunter die in an accident,” or “have this person fall aimlessly to their death.”

Each chapter has a set of levels you must complete. During these, someone is going to die. It doesn’t necessarily mean that this will happen at the completion of the chapter, though. Sometimes, the person is killed right away, setting up a number of other tasks to complete, putting in motion a number of deadly occurrences that will eventually lead to yet more death.

The mechanics of death

Since Felix must venture out into the living world in order to achieve his deathly goals, there is one thing he must steer away from: sunlight. This is the main mechanic of the game: you must move around the level on small square tiles, all the while avoiding deadly rays from the sun. You can change the sun’s direction (RB) and move objects in order to complete your overall mission objective. This means that you’ll be hiding in the shadows and manipulating light in order to complete your goals. 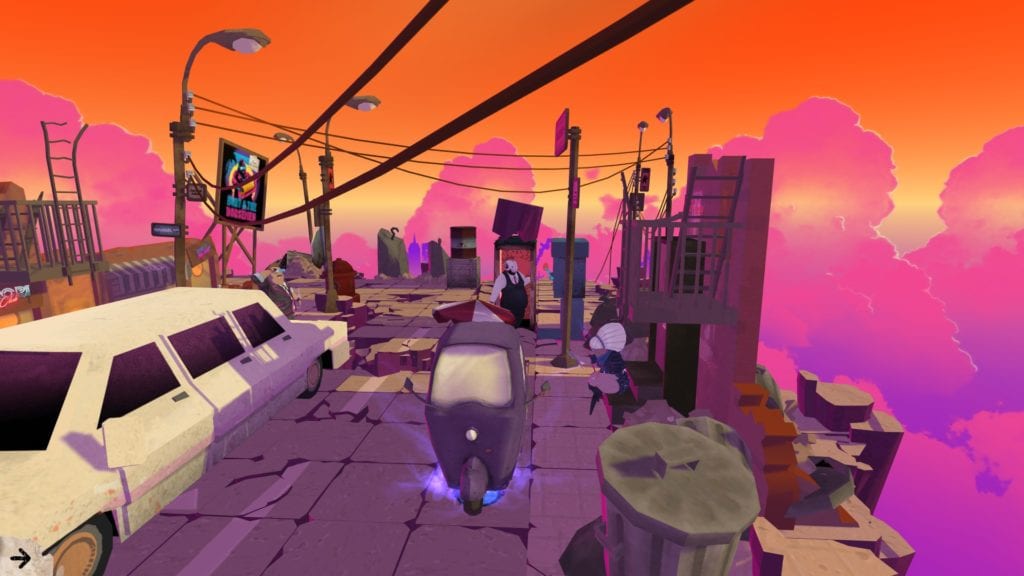 Throughout the game, you move and place objects to avoid detection from the sun. When you find yourself in the path of the sun’s rays, Felix will go back to the safety of the dark or simply replace the object he was holding. During this time, Felix is bouncing back and forth, even twerking to the game’s music. As you continue on, new obstacles and contraptions are added to the board. Objects can also be stacked and mounted in order to provide more shadows to move throughout the level. However, there is only one way to finish a level, and challenges boil down to earning a better grade for fewer movements used. So, you have to figure out exactly how the mousetrap works and the right sequence of events to put it in motion.

Felix the Reaper is relatively straightforward. You unlock new chapters as you play, each holding a set of missions within. In the puzzle games I played in the past, such as Death Squared, there’s a sense of mastery that comes with completing a puzzle. The oddest thing about Felix the Reaper is that, beyond its initial charm, I never really felt accomplished. I didn’t walk away from each puzzle or level with a sense that I had achieved something. Instead, it left me sighing the hardest of sighs, telling myself, “(Insert expletive), I’m glad that’s over.” 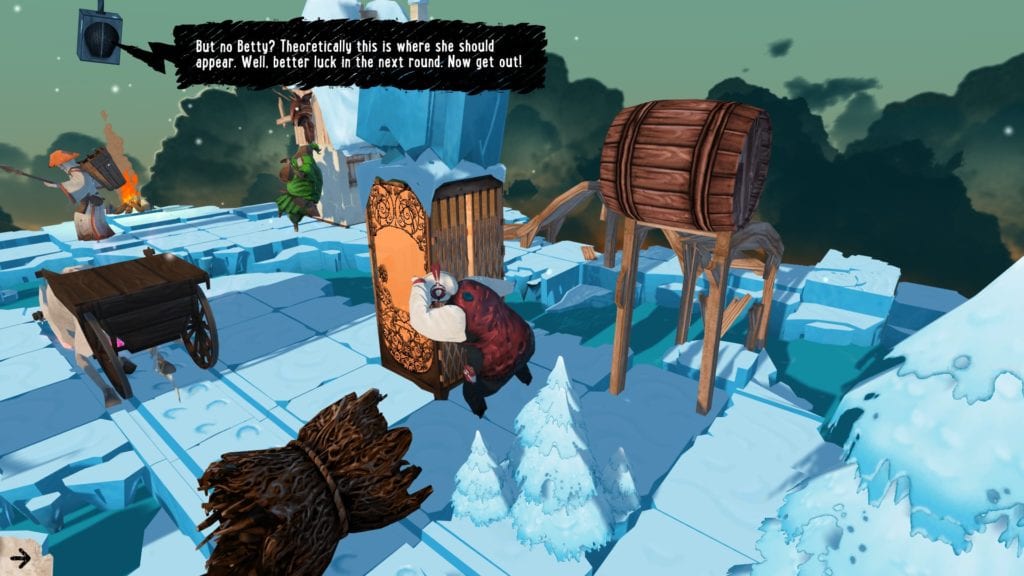 In the game’s menu, you will find a hint system that shows off your next move. A red arrow will point you to where to place an object, or a circle will appear showcasing where to head next. This works most of the time. If you’ve moved through a level and manage to check for a hint too far in, you’ll find yourself getting a vague direction as to what you’re supposed to do next. I can’t tell you how many times I was left audibly frustrated (my girlfriend can vouch for that) only to start over again. I did leave my computer a few times hoping to come back with a clearer head — it worked most of the time. For others, though, I was simply pressing on to just get to the end.

Another small gripe I had came with the game’s camera. I played the majority of the game with a controller. Using the D-pad, you can zoom in, zoom out, and pan the camera, but it’s constrained and not freely moveable. Doing the same on the mouse and keyboard offers a little more freedom in your ability to scan the level. Even so, I often found myself frustrated when attempting to find the right bird’s-eye view of the level in order to figure things out. Walls, crates, or a car always seemed to block my view when I just wanted to figure out what the hell to do next. 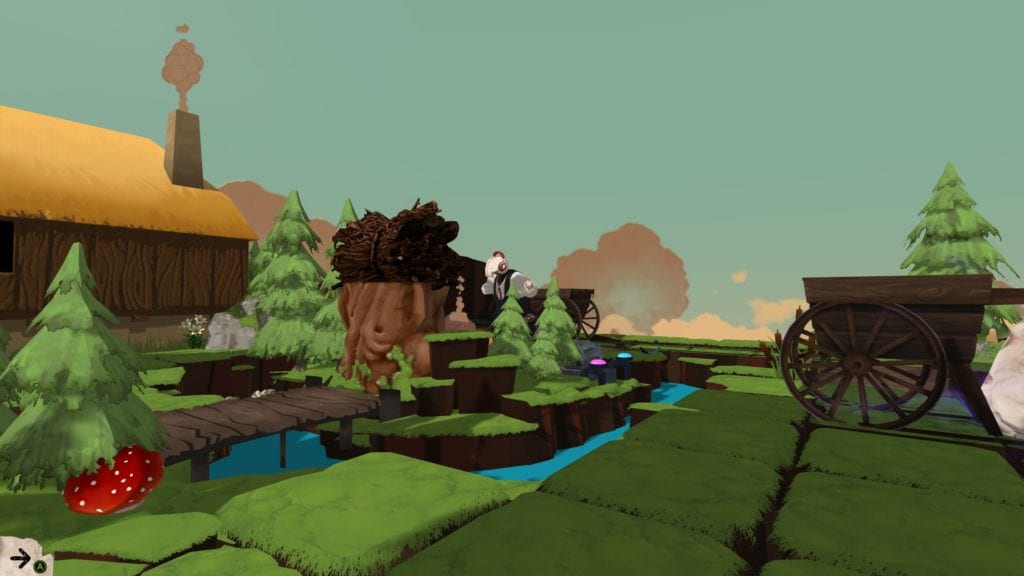 As previously mentioned, Felix is painted as this quirky dancer who just so happens to find himself as a reaper in training. Initially, the music was bouncy and fun, rousing laughter when Felix started to groove. About halfway through the game, it became more of an annoyance than anything, like having screaming kids in the room while you’re trying to put together a piece of Ikea furniture. It got to the point where I just muted the game’s music and never thought to turn it back on. Sorry, Felix.

I’ve always found that I have a rather unique fascination with death. Not that I’d like to see violence and murder happening around me, but rather, the curiosity as to what happens after you die. Do we see angels? Do the heavens open up and a flock of loved ones long-deceased greet me and take me on a flight through the universe? Or, is it just a bunch of nothingness? This might seem out of place in any other title, but in the case of Felix the Reaper, there are tidbits of history regarding death and the grim reaper. This is represented by way of journal entries on the topic. There are even pictures and art, some even in recent times with street art found alongside the city sidewalks of San Francisco. 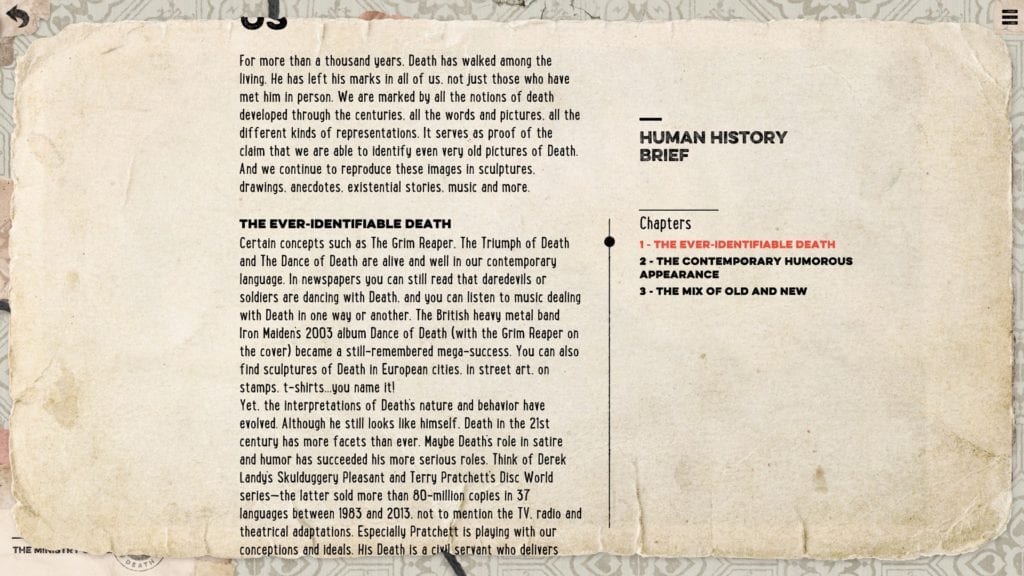 These small journal entries are a nice addition to the rest of the game, especially if you needed to give your mind a break from bashing it against the wall out of frustration.

Felix the Reaper is more than just a casual puzzler. It’s got a little bit of dark humor and history within its walls. But, I never really felt that I achieved something when wading through each of its levels.

I was expecting a little bit more substance when it came to humor and writing. Instead, the cutscenes break up the monotony of puzzles, with a few smirks offered by the characters’ antics. This is especially important when you look at the many other puzzlers that came before it, like the Portal franchise and Death Squared. Both of those managed to execute on a story, comedy, and sense of mastery when it came to puzzle solving. Felix the Reaper does a little bit of each of those things, yet never really manages to put that final nail in the coffin.

Felix the Reaper at times leans into its quirky and unique art style. However, the biggest disconnect comes with the effort to unify this with gameplay. Puzzles often feel like a grind, leaving little mastery when all things are said and done.