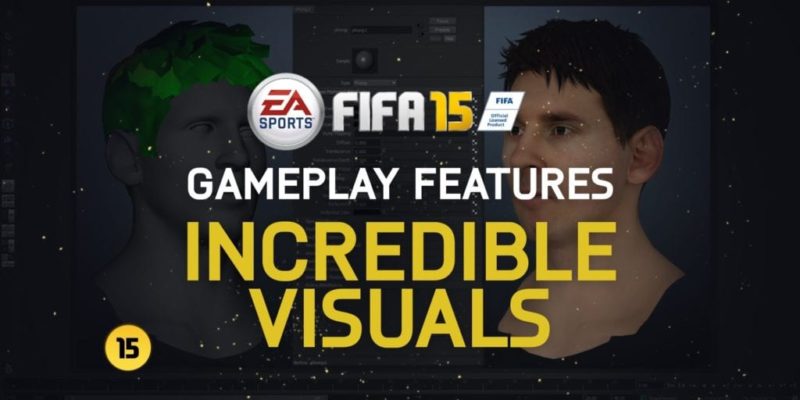 I’d like to play the game on the left.

EA Sports has brought a whole new level of ephemera to the FIFA 15 marketing campaign with its ‘Incredible Visuals’ trailer. First of all, these visuals are not incredible. They’re fine. Pretty good, even. But not incredible. Having a player’s shorts get dirty and their hair wave around a bit is not ‘incredible.’

Second, I know this is just one slice of nonsense from the nonsense PR cake, but would it kill the makers of FIFA 15 to release a video entitled ‘yeah, look, we know the network code has been crap for the past few games and the chipped through ball is still far too powerful because the defensive AI has been broken for about a decade, but this time we’re going to mend all of that ONLY ON NEXT GEN’?

It seems like maybe those problems are a bit more pressing than whether the crossbar makes a nice wobbly noise when the ball hits it. I’m not complaining about crossbar wobble existing – it’s kind of neat – but I’d rather have lag-free online games and an end to stupid glitches like getting no rewards if FIFA decides to just randomly crash at the end of a game where you’ve won a tournament. Messi having an uncanny valley face is alright and everything, but perhaps FIFA 15 would be better served teaching covering defenders how to not suddenly stop running when tracking a striker.

That’s not going to happen though, is it? We’re going to get a somewhat tweaked game with fancier graphics, amazing ShortMess DirtTech™ and the same fundamental problems FIFA has had for absolutely ages. Which is not to say it’s a bad game, it could just be so much better. And the answer doesn’t lie in being able to see players breathe a bit on the pitch. Sorry, it just doesn’t.

FIFA 15 is coming out on 23/25 September in the US/Europe and the PC version will have parity with the console release this time. I’ll probably play it for 100+ hours again, despite the unfixed issues. I’m part of the problem.

Team 17 get Sheltered from a post-apocalyptic wasteland

How many games did you buy in the Steam Summer Sale? Add your numbers