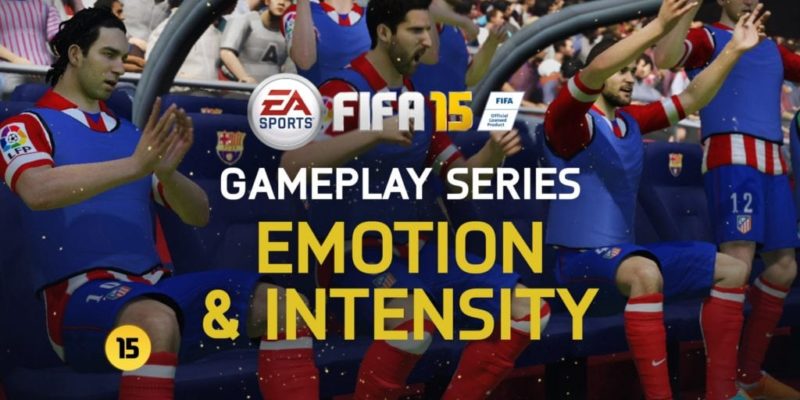 The latest FIFA 15 trailer from EA Sports promises that players will now go through various emotional states on the pitch, just like real actual people. With the aid of this image grabbed from the trailer, let’s have a look at what kinds of things they’ll be experiencing.

It’s pretty difficult to read there, but the emotions list is as follows: Neutral, Anger, Delighted, Alarmed, Excited, Surprise, Disgust, Tired, Happy, Sad and Calm. Although the trailer gives a few examples (repeated fouling on a player will get him riled up, leading to some kind of confrontation with the opposition,) it doesn’t really cover what all the states might mean.

If Suarez slips into an ‘Anger’ state will he try to find the nearest tall defender to take a bite out of and racially abuse? If Sepp Blatter appears in the stands, will all 22 players on the pitch automatically switch to ‘Disgust.’ It’s hard to say for sure.

Apparently if a forward keeps missing a bunch of easy chances, his team mates will become visibly frustrated with him, so I’m looking forward to seeing those particular animations quite a lot. Also, if you score a last minute goal then you’ll see an especially exuberant set of celebrations. I like that idea, assuming FIFA 15’s AI can distinguish between a crucial last minute winner and the sixth goal in a 6-0 trouncing.

There will be improvements to how the crowd react to your on-pitch efforts too, as well as unique chants and celebrations for the big clubs. Probably none for the League One and Two sides though. Not that unique audio really matters in FIFA games, because surely all right-minded people starting playing with accompanying podcasts and music after they get sick of the repeated commentary.

Anyway, none of this will fix the lingering issues with the FIFA games, but giving the players various emotional states sounds like it has the potential to be hilarious (or a bit annoying if it’s triggering canned animation cut-scenes all over the place.)

We’ll know for sure when FIFA 15 is released on the PC in September. The PC one will be using the same engine and features as the PS4/Xbox One versions this time around, in case you didn’t know that.