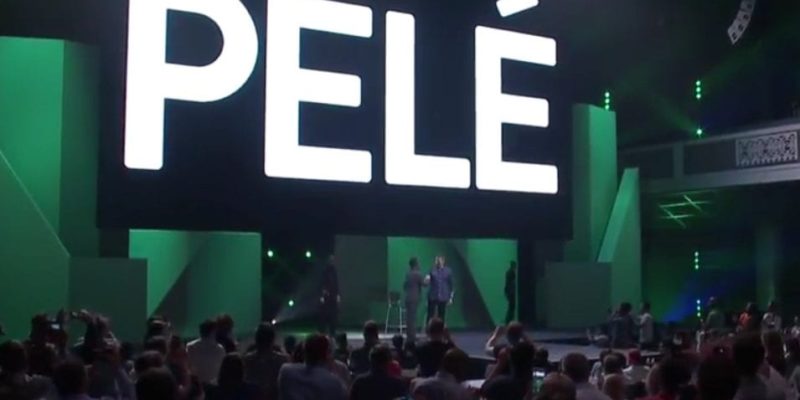 David Rutter appeared at the EA E3 event, to have a chat with Pele and reveal a few more details about how FIFA 16 will play this year. Mostly he was chatting with Pele, though. Can’t really blame him for that.

FIFA 16 will apparently “innovate across the entire pitch” (I know, I know, they say that sort of thing every year,) from defense to attack. At the back, defenders will have improved defensive agility to enable them to “track skill players” with more reliability. Presumably if said defender is actually agile enough to begin with. Your back line will be holding a better defensive shape for breaking down attacks, too.

In midfield, Rutter said players will have better “interception intelligence” for closing down dangerous passes. Build-up through midfield is now said to be “more considered” as well, which I guess means slower.

Up front, FIFA 16 players will be able to do “no touch” dribbling (like Messi, and others – it’s when you leave the ball dangling out there without actually touching it for a bit, you know.)

This is all very well, but it sounds pretty vague. It’s always hard to tell how meaningful any of this stuff is before actually playing the game and seeing how it feels, and how it flows.

In addition to the above, Rutter mentioned something called the ‘FIFA trainer,’ which appeared to be a mode where the game pops up control options depending upon the present situation (in midfield, in possession and under no pressure, it might offer “pass” and “sprint.”) The intention appears to be helping players to learn when the right time to shoot, tackle or play a through-ball might be.

And, as previously announced, several women’s national teams will be included in FIFA 16.

Rutter says there’ll be more news about various features throughout the summer. Here’s the Pele-centric trailer.

The Walking Dead’s Michonne Gets A Mini-Series