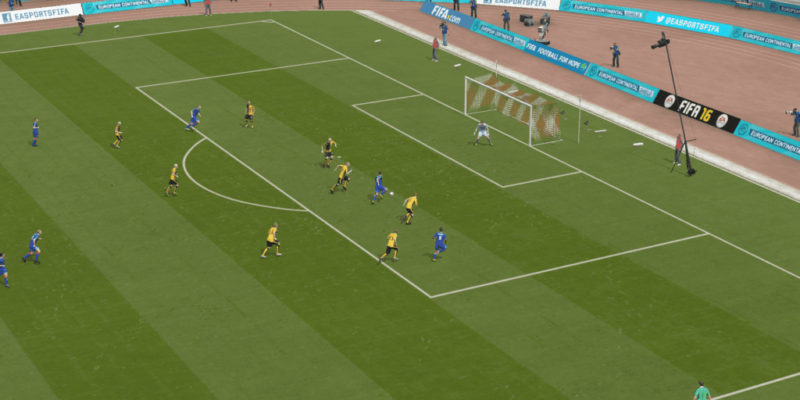 Those who opt to pick up FIFA every year will know the folly of claims that the game is “just the same every year”. If there were a way to somehow remove graphics from the equation and provide a ‘blind’ test involving a spread of FIFA 14, FIFA 15 and FIFA 16, I’m pretty confident regular players would be able to tell the difference. I know I would.

However, there is some underlying (and maybe under-realised) truth to the saying. EA’s licensing deal means they are contractually obliged to release a FIFA title every single year, and this annual churn means the last time the game engine was radically overhauled was for FIFA 06. There was a big marketing push surrounding the ‘Ignite’ engine for FIFA 14 (15 on PC), but tell-tale ‘legacy’ glitches showed that this was more of a cosmetic than substantial change.

New features and additions have been piled on top of creaking foundations for about a decade, and I get the impression it’s starting to seriously limit the extent to which the series’ ‘feel’ can really be altered. 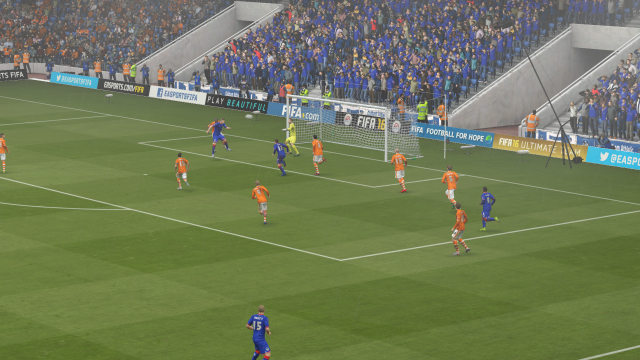 The ‘feel’ of burying a header is still pretty nice, mind you.

FIFA 16‘s headline additions are things like a new ‘draft’ mode for Ultimate Team, that enables quick, head-to-head tournament play with teams pulled from a randomised selection of some of the game’s better players. It’s not unwelcome, but it’s just a slight twist on the incredibly lucrative card-based Ultimate Team mode; which has probably been the most significant contributor to EA Sports’ ability to coast along for ten years without much of an engine upgrade. Moreso even than the relative weakness of the PES series during many of those years.

The other visible inclusion is the selection of women’s national teams (minus the highly-rated Japan due to what I assume are licensing reasons), which you can use in one-off matches or an unbranded definitely-not-the-World-Cup tournament structure. They exist in their own separate eco-system, so the lack of a full league structure (somewhat understandable, as the domestic women’s game hasn’t got close to the popularity of the international tournaments) means you can’t yet manage a side in career mode or anything.

While I’m unlikely to spend hours playing matches with the England women’s team, that’s not exactly a shocking admission. I (and I suspect most other players) only ever play as a fraction of the hundreds of licensed teams. In my case, mostly those perennial tenants of League One Oldham Athletic.

The point of any team’s inclusion, other than authenticity, is that fans of that specific side will be delighted to get to play as them. Followers of the women’s international teams will now be able to play (parts of) FIFA 16 as their nation of choice, and they feel like a natural inclusion after the general success of the recent World Cup. 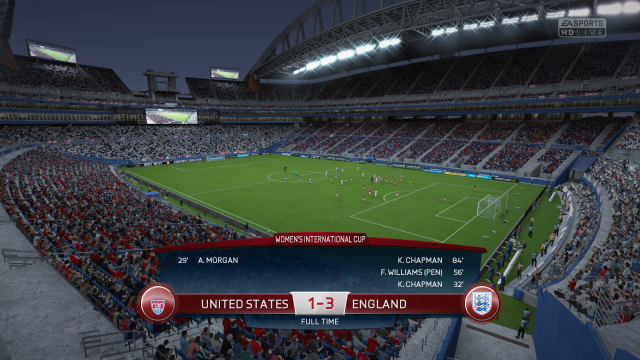 Being able to trounce the USWNT as England is very satisfying.

Those are the additions that attracted most pre-release publicity, but FIFA 16 also makes some pretty notable changes that affect the flow of the game. As mentioned at the start, there’s only so much EA can do with the existing engine, so these changes are restricted to altering, or re-balancing pre-existing systems.

Regular FIFA players will quickly note that ground passes are a lot more sluggish. Passes that would have been fairly soft in previous editions now travel with the impetus of a ball kicked in wet sand by a toddler. To get any sort of pace on a pass, it’s now necessary to use the new ‘do a harder ground pass, you idiot’ modifier of (on a basic Xbox controller) RB. Abstracting ‘harder pass’ to a separate button combo (instead of just holding down A longer) is, frankly, a bit rubbish, but some of the accompanying passing changes do appear to be for the better.

Gone are the days of being able to mash A with both passer and pass-ee facing the wrong way and still connect a pass. Even with some passing assists on, FIFA 16 expects you to take into account whether the person passing the ball can actually see his intended target. If not, it’ll probably go off course. Likewise, if the person you want to receive the pass is busy gazing into the stands and fantasising about his agent, it may not be collected cleanly; or just nabbed by an eager opposition player. 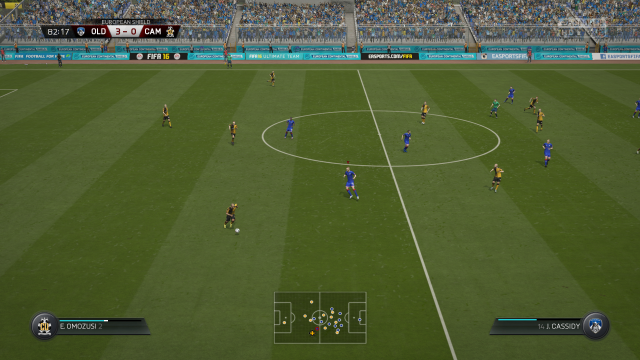 If he tries passing to the nearest guy, I’m probably going to nick it.

The increase in intercepted passes is in part down to the new challenges in picking out your men, and in part down to an increased assertiveness on the part of AI players. This extends to defensive duties too, where you can now rely on other players in your back line to actually help out and press opposing players with a bit more reliability than in FIFA 15. Pace has been given a metaphorical kick in the shins, which helps with stopping tiny, nimble strikers waltzing around everybody, and sheer physical presence can now knock people off the ball.

Unfortunately, all the over-zealous referees who went missing from PES 2016 were apparently shipped off to FIFA 16, because I’ve seen some fairly innocuous nudges given (and received) as penalties. This can make the more frequent penalty box jostling a bit of a gamble.

That’s not ideal, but other changes to defending are quite welcome. Since pace has been toned down (outside of double-tap knock-ons, anyway), FIFA 16 places a few more demands on the defending player to actually get close to the player they’re trying to mark or nick the ball from. Even in the ‘tactical defending’ mode, the old A button still gave you a bit of an auto-pressuring function. That’s no longer the case, and I found that the Left Trigger (again, on a basic 360 controller) ‘jockeying’ ability was now more reliable for keeping my defender in range for an attempted tackle. 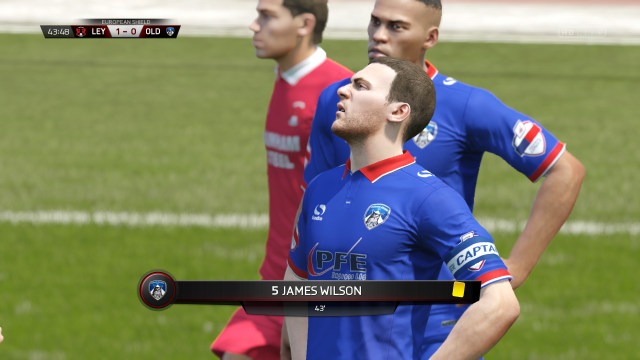 That’s a pretty good “I never fuckin’ touched him” face.

What that all means is that the minute-to-minute play of FIFA 16 is, a few refereeing quirks and basic passing being a bit sloppier than it really should be, a general improvement over FIFA 15.

Game modes though, are largely unchanged. In career mode (my usual haunt) there are actually more additions than usual, but these do little to shake up the inherent malaise of a much-neglected structure. You can now enter pre-season tournaments (fine, but these are basically the same as the prior friendly fixtures, just with a prize pot at the end). It’s also possible to train players in individual skill areas; a properly nice addition that’s presented in a strange, gimmicky way. Players can only be trained in groups of five, because apparently just setting up training routines for the whole squad would be too straightforward.

Scouting, at least, has an under-advertised but useful change. Sending a scout to look at a player for long enough in FIFA 16 will now reveal his overall rating. Sadly, scouts are still unable to judge whether recommended players are anywhere near a club’s signing abilities. Either that or the guys I have at Oldham really do believe we can entice Benteke with a weekly pay cut of £95,000.

Career mode also suffers from a problem that has afflicted FIFA for as long as I can remember (and something PES definitely handles better): all of the teams you meet basically play the same way. It doesn’t matter whether you play Rochdale or Arsenal, every single AI club will try to play sharp, possession football based around close passing. Just once I’d like to see a side that fancies flinging long balls up front for a big man to knock down. Or any kind of distinguishable individuality in a club’s style of play, really. Instead, every CPU team wants to emulate Xavi and Iniesta in their prime. Admirable stuff, but rather boring when there’s no variation to this style across every season. 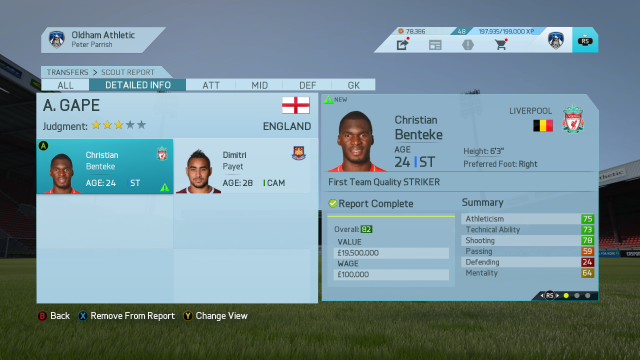 Right lads, if we fire everybody at the club we might be able to pay Benteke for a week.

For some more eclectic and chaotic styles of play, you need to take FIFA 16 online. Here, a lot of people (including myself) are still flailing around trying to get to grips with the new passing systems, and winding up with pass completion rates of about 65%. It’s not pretty, but, in the lower divisions at least, it’s plenty entertaining.

I’m not currently in the best position to judge the fidelity of EA’s server set-up this year, because my own internet has been busy being terrible for the past week. I can say this much. Even with terrible internet, the input lag/match judder-glitches have been no worse than with FIFA 15 on PC, so I’m going to cautiously suggest things are at least static in that department. They may even be slightly better. That said, I’ve seen plenty of people reporting Ultimate Team match disconnection woes, lost FIFA points and the like.

Well worth noting too that, unlike with PES 2016, we actually got a proper (if slightly bare-bones) PC version of FIFA 16. 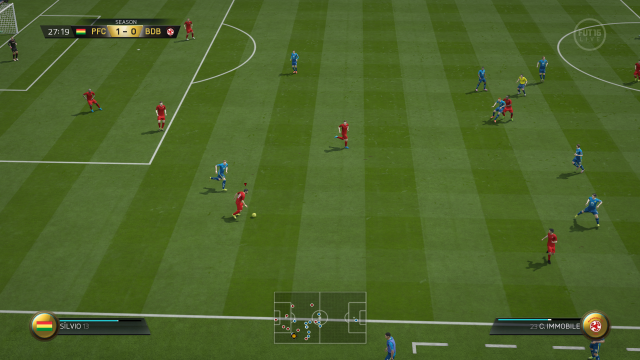 A slender, first-half lead. Pretty much the peak of my FUT career.

None of the main game modes have really received huge changes (poor old Pro Clubs has been left out in the cold for so, so long), unless you consider ‘slightly different way to put together and play with a star-studded squad in Ultimate Team’ meaningful. Across-the-board gameplay tweaks, though, are largely positive this year. The weakness of basic passing (and the weak-minded refs) can irritate, especially when your player stands rooted to the spot as an opposition player bounds in for the ball like a flappy-eared puppy, but the need for greater accuracy in both passing and defending are broadly welcome. As is the long-overdue toning down of roadrunner strikers.

The FIFA series hasn’t been truly great in a long time, and will almost certainly require a serious, substantive overhaul of the main engine (rather than little bits of code rearranging and some new post-processing) to ever get back there. With FIFA 16, however, it has at least moved back into the realms of being quite good.