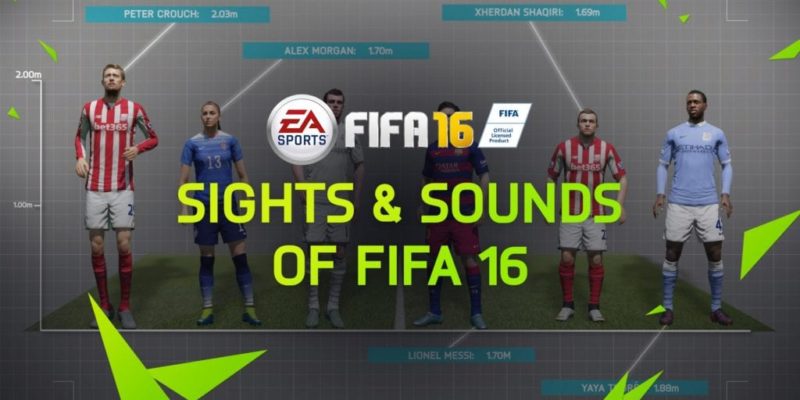 The newest trailer for FIFA 16 goes over some of the often-popular presentational changes that are coming in EA Sports’ latest installment. Let’s address whether they sound any good, shall we?

It’s not a great start. The very first ‘feature’ listed by the video is the introduction of an embedded video tile on the main menu. Nobody wants that, surely? That’s the kind of irritating crap people actively try to avoid when browsing online, I doubt they’re going to want it in the middle of their new game.

Oh well. In other menu news, your ‘favourite stadium’ will now form the backdrop. That’s not bad, though I can’t really muster any strong options on it.

On to more match-related FIFA 16 details. You can now choose ‘foggy’ and ‘hazy’ weather types for a match (and will presumably see them in career mode as well), which sound alright. They’ve added nine new stadiums (including Borussia Park and the Stade Velodrome – and the Premier League newcomers) too, which seems fine and dandy.

Bundesliga matches will have an ‘authentic broadcast’ look to them, in the same manner as the Premier League matches in FIFA 15. Again, that sounds alright.

There will be more “player storylines and statistic tracking” during games, although this is just demonstrated by Alan Smith saying “gosh Harry Kane is looking sharp” so maybe don’t get too excited about this prospect.

900 new crowd chants are said to be in, but there’s no confirmation on whether any of them are the old geezer sat behind you yelling “GET RID!!” every two minutes.

Post-game, it looks like there’s an easy way to get a look at the individual match highlights. I’m not sure if this screen pops up automatically every time (which would be bad) or is just a nicer-looking highlights menu you can optionally select (which would be fine).

The video concludes with a bit of stuff about new hair, body types and facial scanning. It’s probably best to just watch that and judge for yourself whether Messi looks more like Messi now.

FIFA 16 will be coming to PC on 22 September. A demo is expected earlier in the month.

Gearbox is now the “full and rightful owner” of Duke Nukem