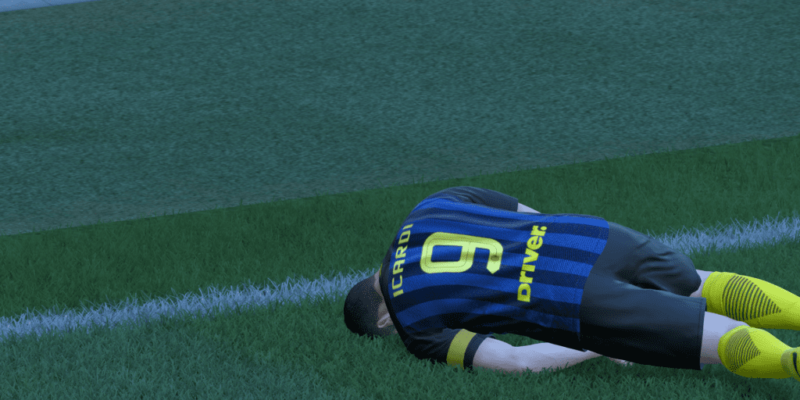 Not sure about you guys, but I don’t think a match in which somebody scored five own goals would ever be referred to as a “dream debut”. But that’s what happens when you intentionally start causing mischief in FIFA 17’s new narrative ‘Journey’ mode. It can’t really account for you playing Alex Hunter as somebody having a live mental breakdown at Stamford Bridge.

I promise I’ll get to how the FIFA 17 demo actually plays in due course, but I really do need to start with The Journey. This demo includes a short segment in which you meet Hunter’s childhood friend and obvious dickhead traitor Gareth Walker, play in the aforementioned debut for Manchester United, and answer some post-match questions. It’s contrived, ripe for melodrama, and bizarrely compelling. 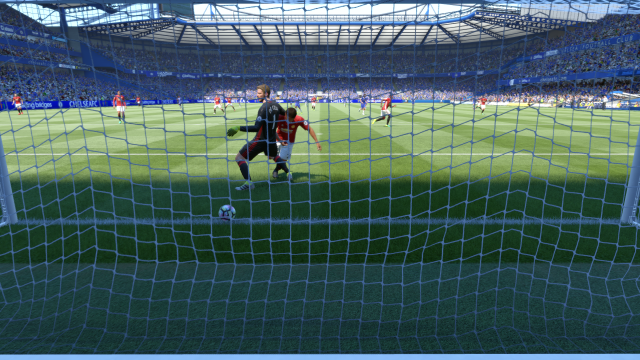 If you can accept Jose Mourinho choosing an away game at Chelsea to blood two young kids while Ibrahimovic warms the bench, then you’ll be right on board with the plausibility of The Journey’s story. Mourinho, sadly, only appears to have leant his face to the game – not his voice. All the match instructions come via a proxy Generic Coaching Man; presumably because Hunter can (in the full game) play for any Premiership Team, and even EA Sports don’t have the clout to get every Premier League Manager to mumble through a team-talk for their FIFA 17 story mode.

In a nod to fellow EA studio BioWare’s Mass Effect Paragon/Renegade dialogue paths, Alex Hunter occasionally gets to say things. He won’t be punching any reporters in the face (well … you never know), or romancing Arsene Wenger (well … you never, okay, unlikely), but each choice pushes him down the ‘fiery’ or ‘cold’ character paths. Or you can play things safe with a boring, measured response. These will presumably have some repercussions somewhere along the way.

Everything works fine if you stick to your preordained role as youngster who comes on for the last twenty minutes and scores the winning goal. You hit all your bonus marks, get a positive write-up from the manager, and get to enthuse about how great everything is in the post-match media scrum. Go a bit mental, though, and FIFA 17 gets terribly confused. “They’ll be looking forward to seeing more of Alex Hunter”, the commentary burbles, as you slouch off with a record-breaking number of Hunter (OG)’s under your belt. Then the interviewer botches the story of the world’s most surreal football debut by being too polite to even mention it. 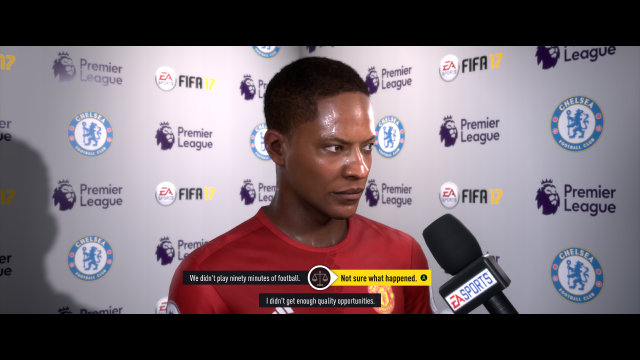 I wasn’t really expecting The Journey’s reactive flags to be able to cope with any of this madness, but I did hope receiving a match rating lower than the three points I just handed to Chelsea would elicit some kind of relevant response from the media. I’m also pretty sure that cosy licensing relationships will prevent this mode delving anywhere close to the darkest depths of football depravity. While warming up, Hunter is subjected to a devastating chant of “who are yah! who are yah!” Not exactly the most ribald skewering to ever come from a football crowd.

And yet, The Journey is weirdly moreish. It’s going to be silly. It’s going to insert hilarious drama as often as possible. It’s probably not going to have a side-plot where Hunter’s dad has forgotten to report his son’s taxes for several years or Walker has to cover up a sexual assault charge. But that’s all okay. It’s Be A Pro mode with some actual cut-scenes, interaction, and semblance of drama to your progress at a club. I’ll probably play it once, delight in every contrivance, and then never touch it again. And that’s fine.

The rest of FIFA 17, meanwhile, I’d hope to be playing for a lot longer. Usual caveats for FIFA demos apply here. This is most likely the same (old) build of the game EA brought to GamesCom and will therefore not actually be the same as the final release. Also, everything here is offline stuff so it’s only giving people a look at that side of the game. 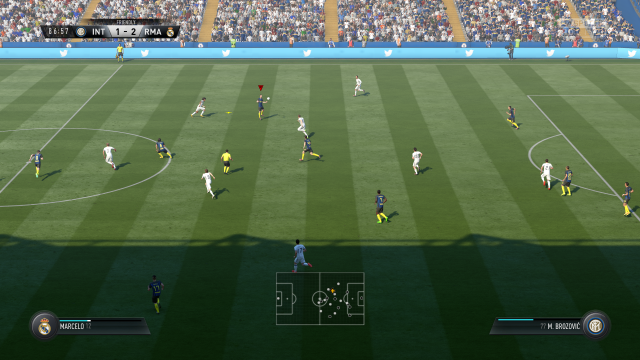 Looks like Inter need to get the ball inter the net. That’s right. I’m not even sorry.

Take a random poll of people who’ve played both the FIFA 17 demo and the previous game, and odds are you’ll get about half who feel it’s just like 16 and half who think it’s really quite different. Honestly, you could even argue that they’re all correct up to a point. If I didn’t know FIFA 17 had switched to the Frostbite engine, I could quite happily believe this was still running on Ignite. Player faces look a little better, sure (though a fairer comparison will be when we get a look at Billy Strikerboots from League Two rather than the specially-sculpted Chiellini), and the lighting probably looks nicer. Maybe it’s because I play FIFA on PC where it always tends to be pretty crisp, but I’m not seeing vast visual differences.

A lot of the play does feel quite like FIFA 16, insofar as similar movements and exploitation space will work against the AI here as they did in the last game. But there are new tricks you can employ if you can break out of those familiar patterns. 16, for example, taught me never to attempt a simple square pass across the edge of the opposition’s box, because a defender with psychic insight would cut it out every single god damn time. In FIFA 17’s demo, you can now actually do this without the ball magnetically attracting itself to the nearest opposition boot. I also learned the areas where launching a cross in 16 would send it sailing, without fail, into the arms of the goalkeeper. Maybe similar zones of failure will exist in 17 too, but at least they’ll be different zones; and I’ve yet to find them in this demo.

Both the ‘driven’ (hard, low) shot and through-ball are fun to mess around with. The former seems quite potent and will probably be toned down before release, while the latter can sometimes open up play with low, cross-field balls in quite gratifying ways. I’ve seen a bit of talk about the ‘new’ shielding of the ball being more effective too, but I always found that a useful move in 16 as well and don’t detect a major change in this version (admittedly, it has some new animations). Body mass feels like it’s affecting movement more too, with smaller players turning and darting quicker than lumbering center-backs, but as with so many iterative FIFA changes that may be a partial placebo effect. 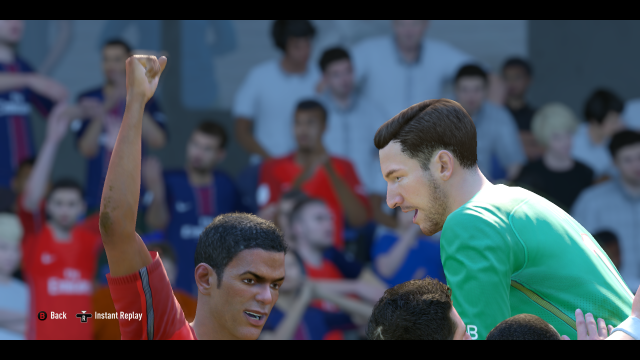 Lighting improvements or not, FIFA can still look extremely odd at times.

Corners, free kicks and penalties have definitely changed. The first two set-pieces follow a similar pattern. You move a small target crosshair around and ‘charge up’ the delivery, then switch to a player in the box and move him around into position. A further tap of X (or equivalent ‘cross the ball please’ input) will then launch the ball towards your targeted area and, ideally, your player of choice. With teams who have a suitably strong and tall striker I found this to be quite a reliable way to put the defense under pressure. You can out-muscle people pretty well, and force multiple chances and corners in succession. I’m a little concerned that giving players this much control over where to drop a corner into the box will lead to the discovery of ‘sweet spot’ zones where a goal is near-inevitable (that would be a big problem online), but in theory I like the new system.

As mentioned, penalties have a rejigged system too. You can now change your angle of approach ahead of taking the shot, and rather than moving an (invisible) target around the goal with your aiming, you’re now kind of guiding an (again, invisible) arrow that extends out from the ball. Applying power to the shot is basically the same. So far, it seems hilariously easy to cock up, though I’m sure people will get used to it in time. I’m less convinced any change was really necessary here, but it’s not really worse, just slightly different.

My main worry though, regards something that FIFA has failed to address for several years. It seems like, once again, all the AI teams will play with basically the same style. Doesn’t matter if they’re Barcelona or Barnsley, you’ll see broadly the same game plan and execution every time. Just once, I’d like to see a team playing a persistent long-ball tactic. Or a bit of actual personality escape from a player’s movements so you think ‘yep, that’s Robben’ rather than ‘yep, that’s Winger #451 with Robben’s face’. On a brighter note, the demo FIFA 17 teams seem marginally less obsessed with flawlessly retaining possession on Legendary and World Class difficulty levels, so that could mark a minor change for the better. 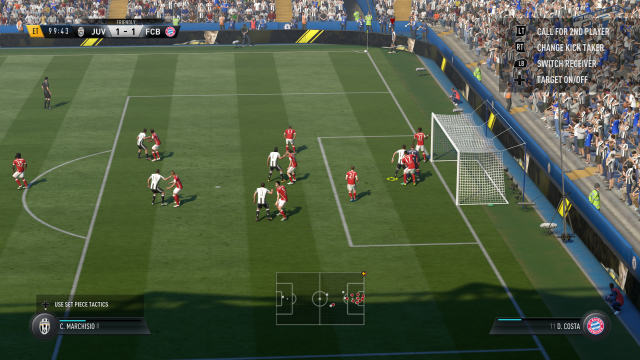 HOOF IT LAD. GET IT IN THE MIXER. SCORE THE GOALPOINTS.

The switch to Frostbite hasn’t changed much with the technical side of the PC version either. FIFA 17 does now support 21:9 ratios, so that’s a positive progression, but much of the rest remains the same as FIFA 16. Here’s the graphics settings so you can see what I mean. 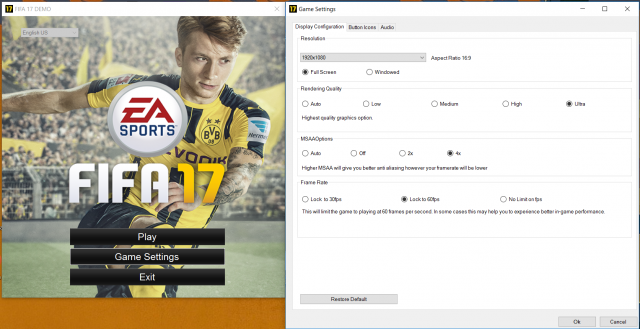 ‘Rendering Quality’ has been expanded out into a few more increments, but other than that it’s the usual stuff. Ultra/4x MSAA with the 60fps lock worked a treat on my i5-6600 / 16GB RAM / 380X machine (as you’d hope, since that’s well within spec). Sadly, menus and replays are still locked at 30fps, and the ‘no limit’ frame-rate option really requires some kind of external frame-limiter or you’ll get stuttering galore. Still, as PC versions go, it’s still leagues ahead of Konami’s pitiful efforts with PES.

Accepting the fact that the final FIFA 17 release will almost certainly play a bit differently, the demo offers some positive incremental (aren’t they always?) changes. The new freedom over free kicks and corners is terrific, if potentially open to abuse in the long run. Same goes for the driven shots and through-balls. Toning down the frequency with which passes are intercepted in fairly absurd circumstances (along, perhaps, with some better AI player positioning) has helped too. Both passes and players seem a little ‘weightier’ in general, which makes play feel a bit more tactile at times. And looming over it all is the surprisingly engaging Journey. Maybe it’s just sheer novelty that’s drawing me to this, but it’s a mode which potentially adds a real sense of purpose to your Be A Pro-type career. Can’t wait to wipe a tear (laughter, sadness? either way) from my eye as Alex Hunter scores a last minute overhead kick to save the orphanage and teach us the true meaning of Christmas.

All Battlefield 4 DLC is free until 19 September