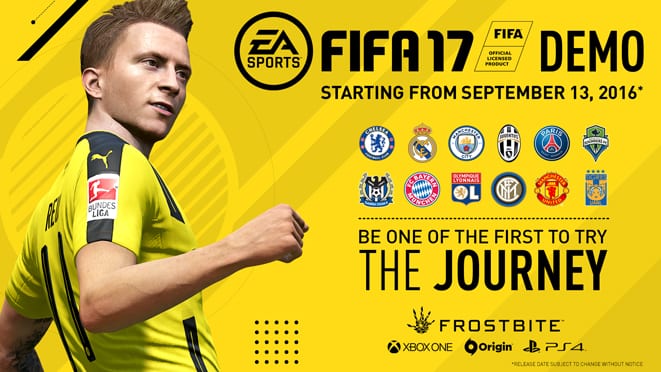 The FIFA 17 demo release date of 13 September had been floating around for a while, and EA has now fleshed out the details with a list of teams. For what may be the first time, it’ll include something other than the basic ‘Kick-Off’ friendly mode – a little bit of the ‘Journey’ story.

It’ll apparently be a “select experience” from The Journey, and for the purposes of the demo Alex Hunter will be playing for Manchester United. Beyond that, the FIFA 17 will indeed be the usual Kick-Off friendly between two of the included twelve clubs (probably time-limited to short halves, but that can usually be modded out on PC).

Oddly, despite cover star Marco Reus, Borussia Dortmund aren’t included in the demo this time around. The teams are as follows:

Three stadiums will be available to play matches in, too.

DOOM gets Deathmatch and Private Matches this month