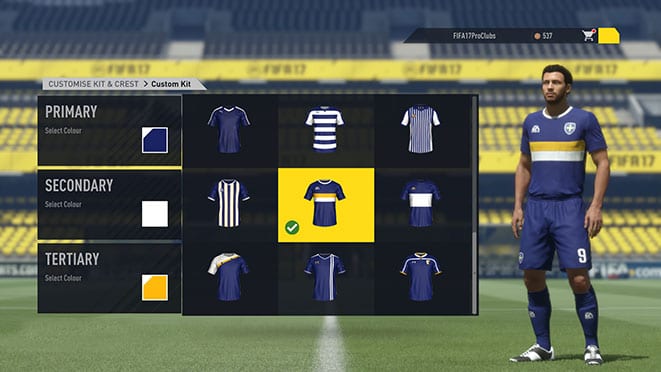 As has been rumoured since a couple of dev comments at E3, FIFA 17 will be making some changes to the way Pro Clubs mode works. Player Growth has a new system (with traits), and both kit and badge for Pro Clubs teams can be customised.

For FIFA 17, Player Growth in Pro Clubs will be based on your player’s overall match rating. This is intended to encourage team-work and co-operation (which, after all, is what Pro Clubs should be about). Your out of 10 match rating will boost individual attributes at the end of a match. These will develop according to your chosen position, so forwards in FIFA 17 will see boosts to Shooting stats ahead of Defensive ones.

However, you will have control over which new traits to adopt. Skill points (earned in-game) can be spent on a variety of traits, affecting “Physical, Defending, Dribbling, Passing, Shooting, Pace, or Goalkeeping”. Pick the ‘Giant Throw-In’ trait for example, and you’ll get a boost to long throws.

In terms of club customisation, there will be 24 Pro Clubs kit templates to select from in FIFA 17 (hoops, stripes, all of that stuff). “Primary, Secondary, and Tertiary colours” can be chosen, to really nail that winning combination of lime green, fluorescent pink, and turquoise. A crest shape and design can also be customised, giving you a unique(ish) badge to wear in Pro Clubs.

Images of all the above features can be seen below (you can click to enlarge, but the source material is unfortunately kind of small to begin with). FIFA 17 will be released on PC in September.