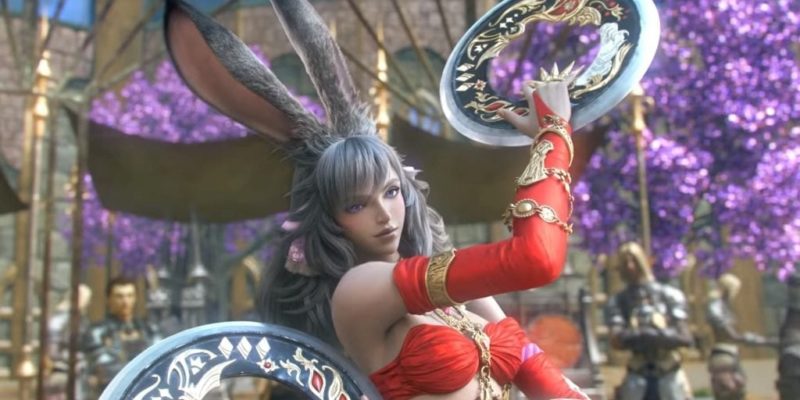 Final Fantasy XIV‘s newest expansion, Shadowbringers, brings an awful lot to the table. A continuation of the story, new areas, new dungeons, new systems… and new classes. Or “jobs,” in the game’s terminology. I’ve spent time with Shadowbringers — not as much as I’d like, but a fair bit. Enough that it’s time to start discussing it. Today, we’re going to focus on the new jobs: the Dancer and the Gunbreaker. I’ve taken each of them through Palace of the Dead and a couple of duty roulettes to get to grips with them, so while I don’t have the most experience in the world, I reckon I can say a few things.

An expansion of jobs 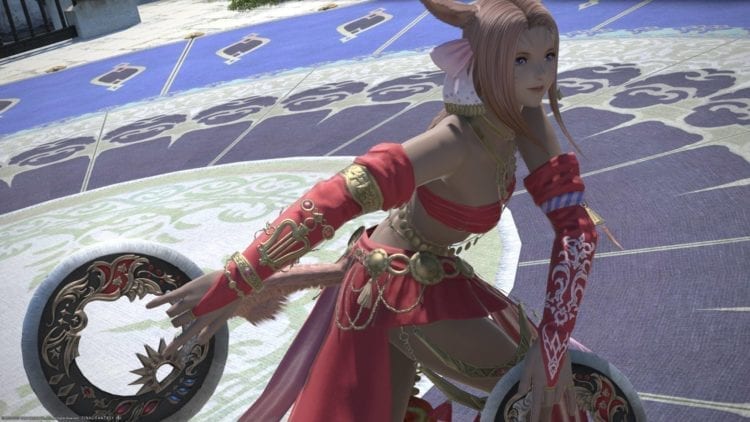 Alas, my character does not look nearly this good in the Dancer outfit.

To anyone unfamiliar with the Final Fantasy series, “Dancer” probably sounds like a ludicrous class, especially as a damage dealer. How is someone doing the flamenco meant to take down a behemoth? Quite effectively, as it turns out.

The Dancer job has varied a lot in series history. Usually Dancer is focused on debuffs with some damage thrown in, and there’s often a fair bit of randomization to the actual effects any given Dancer will throw out. In Final Fantasy V, the Dance command would trigger one of four abilities at random – and you’ll usually hope for Sword Dance, which inflicted quadruple damage.

In Shadowbringers, the Dancer is a ranged DPS class – hurling boomeranging chakrams with devastating efficiency – while also providing a little support to the party. And yes, you’ll be dealing with randomization at the same time. 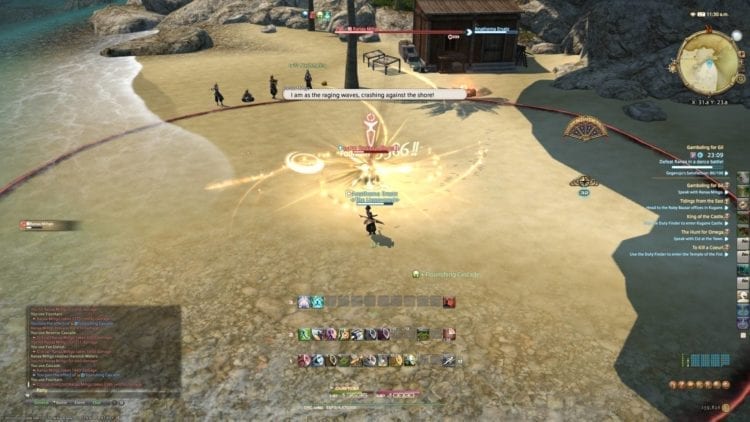 What procs and when depends on random chance, which makes the Dancer a very reactive job.

Unlocking the Dancer isn’t too tricky: once you’ve got a character of the appropriate level, simply head to Limsa Lominsa and have a chat with the dancers there to sign up with their troupe. The initial job quest will teach you the basics in the form of a “dance battle” (yes, really) in front of a potential patron while Vamo alla Flamenco applauds in the background, but really getting to grips with the class will take more effort.

What I love about the Dancer is that… well, combat is a dance. You’re not following a set rotation of abilities for maximum efficiency. You need to change your character’s physical position and your ability rotation depending on the situation. You’re following steps, but those steps might change unexpectedly based on the tempo, and — oh dear this analogy has gone on for far too long.

Improvise to the beat 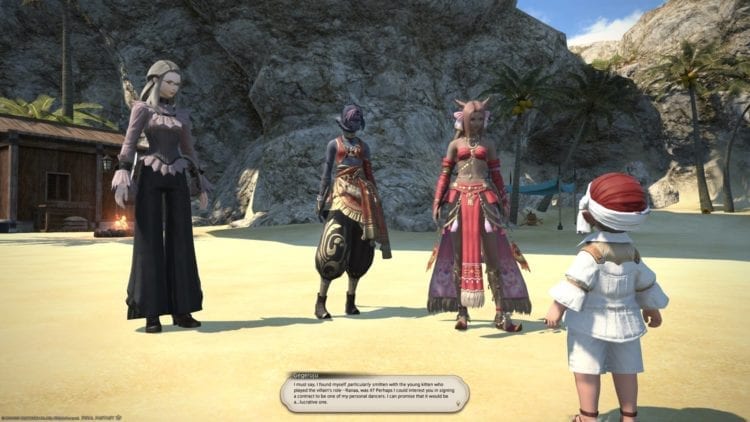 Even in Shadowbringers, the wealthy Lalafell remain immensely creepy.

Dancers don’t have this, as pretty much every attack they do has a 50 percent chance of giving them one of those ability-boosting buffs. Attack B may give you the boost you need to do attack C. Or you might need to reset your rotation, do your self-buffing dance again, or use one of your more powerful attacks instead.

Excellently, a lot of their abilities aren’t time-limited. Some of the Dancer’s most powerful attacks rely on charges that you’re not overly likely to get (two or three 50 percent chance procs in a row, I believe). As such, it’s rather nice that once you’ve acquired one of these charges, it doesn’t fade until you use it. You can build up these charges on trash mobs before unleashing them all on a boss in a ballroom blitz, several minutes later.

Their support abilities ramp this up even further. Other than a point-blank AoE heal, Dancers can designate one fellow party member as a dance partner, sharing a variety of self-buffs with them. While this is usually going to be a fellow DPS so that you can ramp up their damage, there are times when you might want to pick the tank so that you can dash in and provide them with a swift heal. I imagine later abilities will play with these even more.

Fun, varied, and unique. I’m not convinced the Dancer has the most stable DPS out there, but I haven’t crunched the numbers; it may well be that even if their abilities proc less than expected, they’re still up there as a top-notch damage dealer. Either way, I suspect their additional support powers might make them a worthy inclusion in a party. And if nothing else, it’s tremendously fun to dance your fingers across the keyboard in reaction to events and procs as your character dances on screen. The gorgeous attack animations don’t hurt, either. 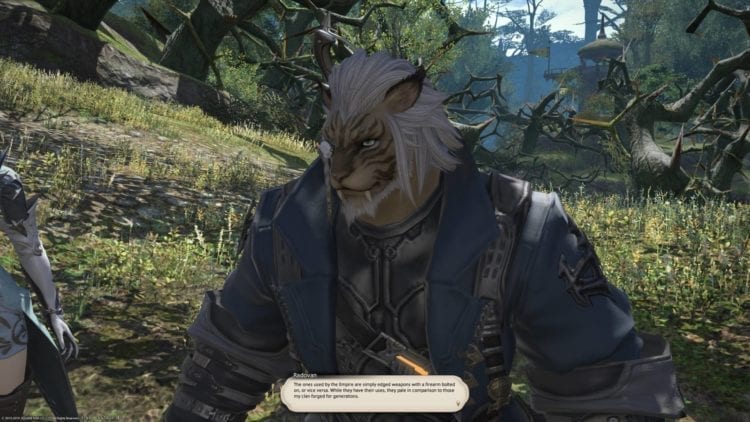 Oh, right, and the Gunbreaker trainer is a hulking cat-man wearing a monocle. Ten out of ten for that, at least.

The second new job in Shadowbringers is the Gunbreaker, probably better known as “the one with the gunblade,” or “that guy from Final Fantasy VIII.” If you haven’t been paying attention to the pre-release stuff, you might be surprised to learn that this is a tank class rather than DPS. This also means we haven’t seen a new healer since Heavensward, but hey.

I don’t tend to play tanks so I’m considerably less qualified to talk about the Gunbreaker, but I’ll give it a go. To get started with the Gunbreaker you need to head off to the wooded lands of Gridania, where you’ll bump into a refugee Gunbreaker willing to teach you his ways. This opening quest is an escort mission that is a lot less entertaining than that of the Dancer, but it does force you into both attracting the attention of enemies and walking into attacks meant for other people, so it gives you the tank mentality. 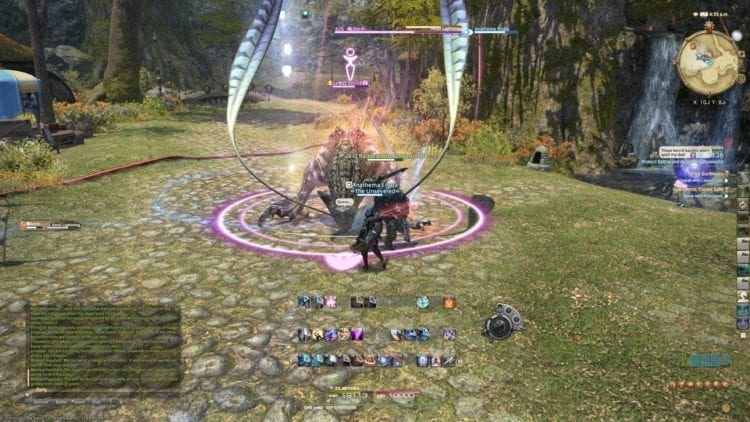 The Gunbreaker doesn’t actually break guns, despite the fact that I’m pretty sure a sword married to a revolver would have some structural integrity problems.

As with basically every tank, the Gunbreaker has high HP, decent armor, and a toggled ability to increase the amount of enmity they pull from enemies. Their unique mechanics come from the Magitek cartridges loaded into their gunblades. Certain attacks slam cartridges in, while others blast them out. Interestingly, several of these are on an entirely separate timer to everything else you have, which may open up some unique possibilities for the dedicated tanks out there.

I’m more interested in one or two of their other abilities, though, which are a mix of bizarre and risky as hell. One makes them completely immune to almost every sort of attack… at the cost of reducing their HP to one. You’re probably going to want to have that queued up with a macro to alert healers to pop all of their cooldowns on you and heal you back up before the effect wears off. It’s a fascinating concept: an ability that can save you from certain death, at the risk of putting you in a position to immediately die.

I’m not too struck on the Gunbreaker, but as noted I don’t really play tanks and I don’t see that changing in Shadowbringers. I will say that – despite my deep-seated loathing of Squall – their animations, like the Dancer’s, are absolutely fantastic. Firing off a round to attract attention from a distance, sliding in with a lunge, and then slashing through an opponent with what’s effectively an exploding sword is exactly as cool as it sounds. The fact that a slew of Gunbreaker abilities are named after Final Fantasy VIII skills is a neat touch, too.

Not casting shade on Shadowbringers 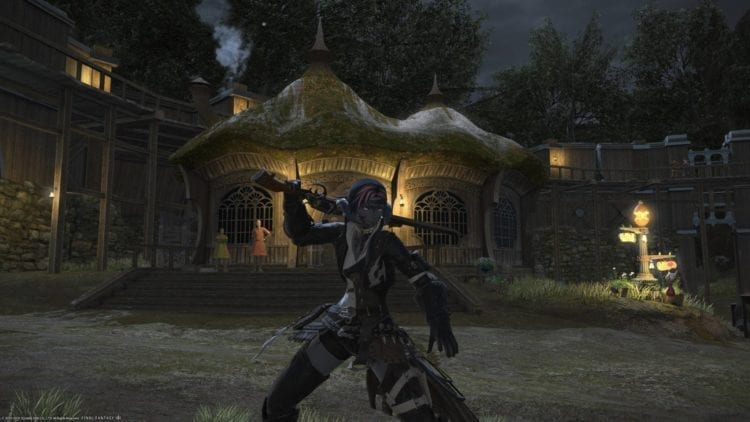 Still, I’m pretty satisfied with both new jobs, even if I’m probably not going to be playing with either of them all that much. That’s down to me rather than the design. My “main” job is DPS already, and I don’t particularly want to switch to Dancer right now – and besides, there are other DPS classes I want to fiddle with first. As for Gunbreaker, I’m more focused on playing around with healers as my secondary class at the moment.

I’d absolutely recommend trying out both Final Fantasy XIV: Shadowbringers jobs as soon as you’re at the appropriate level, however. Both offer some new and unique spins on the traditional roles, and they’re worth checking out for that alone.