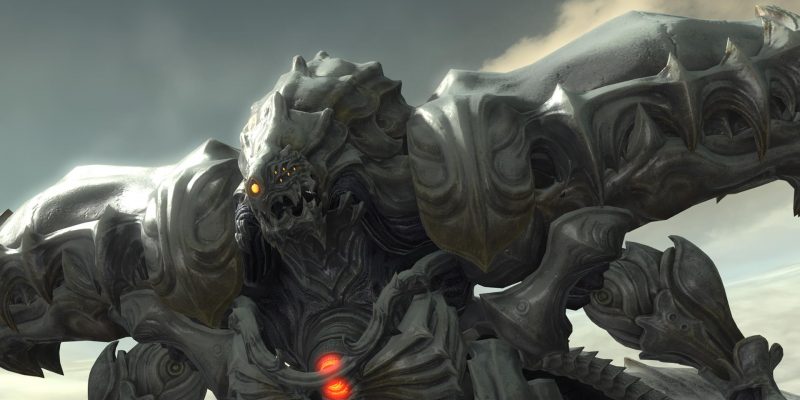 Patch 5.5 of Final Fantasy XIV: Shadowbringers gives us the finale of the Sorrow of Werlyt questline. The Diamond Weapon, the last and strongest of the Weapon machina, is now ready for battle in the Cloud Deck.

This is a Normal Raid, so it’s an eight-player battle. But it’s a bit different than usual, and not just because it doesn’t play Big Fat Tacos. The fight against the Diamond Weapon takes place in the skies and is split across a pair of platforms, which you’ll need to hop between to evade particular attacks. Don’t worry: this guide will tell you everything you need to know so that you won’t fall to your doom. Much.

Oof, this is a hard one to write up in short form. Basically, Diamond Weapon has a lot of attacks split across its two forms, and most of them require careful positioning. It’s also got a few attacks you might recognize from the earlier Weapon raids.

In the first and third phases (in other words, when it’s floating in between the two platforms), there are a couple of things to bear in mind. First and most importantly, every auto-attack is actually a line attack that hits both tanks, so the tanks should stand away from each other and away from the party. Second, make use of the fact that there are two platforms. For healing’s sake the party mostly wants to be sat on one platform, but the second platform is both useful for mitigating some attacks, and essential for avoiding others. Don’t be shy about using the teleporters. The second phase, when Diamond Weapon sheds its armor and lands on a platform, is actually a bit of a breather. You’ve pretty much got some dash AoE (area of effect) damage and knockbacks to deal with, but that’s honestly the most of it and they’re all well telegraphed. Just keep your eyes open for those knockbacks.

Watch out for Adamant Purge in all its variations, and especially the initial one with Ruby Weapon-style claws. This makes one platform completely unsafe and is often mixed in with other attacks.

As far as I’m concerned, the nastiest attack is Diamond Shrapnel. You’ve got little room to move as it is, and the AoEs for this are huge. Wherever possible, I’d suggest at least one of the targeted party members to head over to the other platform to spread this out as much as possible. Nonetheless, as long as the party splits appropriately and you’re not constantly mashed by the auto-attacks hitting the tanks, you should be able to win this battle through sheer attrition. There are only a few cases where mucking up the positioning is likely to result in a wipe.

Also, don’t worry! There’s no Oversoul here. Once Diamond Weapon drops to 0%, the fight is actually over. Those big red/purple glowy claws indicate which platform is going to get hit by the initial variant of Adamant Purge.

Diamond Rain — Unavoidable raid-wide AoE.
Adamant Purge — Giant red claws will appear on one side of the Diamond Weapon, and will strike that side of the arena. Use a teleporter to hop over to the other platform to avoid this.
Photon Burst — Both tanks will be marked with a spread AoE. They should teleport onto the other platform and spread out as much as possible to minimize damage to the raid; this inflicts huge damage.
Adamant Purge (2) — A line stack marker. Everyone should stack up for this to mitigate damage. Called Diamond Flash in damage.
Code Chi-Xi-Stigma — Diamond Weapon switches into a second, armor-less form and changes up its attacks. The vast majority of the Diamond Weapon’s attacks are telegraphed well in advance, but you still have limited room to move.

Auri Cyclone — A blue glowing knockback marker will appear on each platform. Stand as close as possible to it to avoid getting knocked off the arena.
Airship’s Bane — One platform will be marked with a huge AoE, and will leave the arena after being hit. Teleport to the other platform to avoid death.
Outrage — Unavoidable raid-wide AoE.
Auri Arts — Dash markers will appear across the platform. Keep your eyes open: there should be a safe spot between two of the final ones. The very last dash marker will be a straight line, down one half of the platform on the side of the safe spot. Stand in the safe spot until the dashes stop, then immediately run to the other side of the platform to avoid the final dash.
Auri Doomstead — AoE tankbuster. Mitigate as necessary and keep it away from everyone else.
Auri Arts (2) — A dash AoE will appear across the platform alongside a giant circular AoE. Stand in a place to avoid both.
Vertical Cleave — A knockback marker will appear on the platform. Stand as close as possible and position yourself so you won’t be knocked off the platform (usually to the sides or diagonally — it’s not as tight on positioning as Auri Cyclone).
Restoring Armor — The Diamond Weapon goes back to its armored form, and the second platform reappears. Almost all of the Diamond Weapon’s attacks do seriously heavy damage, so be ready on those heals.

All of the previous first phase attacks — Yep. All of them.
Diamond Shrapnel — Two party members will be marked with following AoEs. They need to keep running and try not to get the other party members caught up in this. It’s mostly possible to do it by running along the sides and very edges of the platform they’re on, but the other platform is also useful for this.
Articulated Bits — Multiple hands will appear, facing one half of the arena on each platform. Stand on the other side of the platform to avoid. They’ll then move and attack different areas of each platform, so you’ll also need to move to avoid both. Note that Adamant Purge is usually cast at the same time, so you may have to teleport to the other platform to remain undamaged.
Adamant Sphere — Two meteor towers appear on each platform. One party member needs to stand in each.
Adamant Purge (3) — Every member of the raid is targeted with an AoE. Spread out and then heal up. The damage refers to this as Homing Laser. There’s a lot to remember, unfortunately, so let’s try to narrow it down. One big thing is for tanks: stand away from the party in the first and third phases. Seriously. Those auto-attacks from the boss do a lot of damage if they hit other party members.

There are lots and lots of AoEs, but most are pretty well telegraphed and easy enough to avoid given quick reactions; in some ways, it’s like an amped-up Leviathan fight. That said, absolutely keep an eye on the boss’ cast bar. If you see Adamant Purge coming, then regardless of what attack is currently on screen, be prepared to react to whatever it’s about to throw out. Diamond Weapon loves to hurl out one of the Adamant Purge variants in the middle of other attacks.

Keep calm, be ready to heal and mitigate, and inflict damage whenever it’s safe, but don’t pressure yourself to push out more DPS if it’s going to put you at risk. There’s no real enrage timer here that I’ve seen, and at current item levels pretty much every one of Diamond Weapon’s attacks hit hard. The small platforms, large AoEs, and regular knockbacks make this fight look a lot more frightening than it actually is. It can be frantic, but most of what’s here is nothing you haven’t seen before. Honestly, Adamant Purge’s three variants are the most worrisome aspects. I’ll also throw out a quick mention that you might need to stand on a teleporter rather than running through it or, uh, you might walk off the edge. Not that I’ve done that. Ahem.

Nonetheless, just try to keep calm and analyze where you need to stand. This is definitely a fight that relies on everyone adjusting their positioning to mitigate incoming damage. It might take a mental gear shift, but you’ve got this.

Once the Diamond Weapon’s health has plummeted, it will do the same and you can bring the Sorrow of Werlyt questline to a close. Just ready your tissues for some emotions. This is Shadowbringers, after all.

For more Final Fantasy XIV: Shadowbringers dungeon, trial, and raid guides, have a look at our guide hub.

By Kevin Foley13 hours ago
Guides