Final Fantasy XIII‘s PC port was one of the most catastrophically awful things I’ve had the mixed pleasure of writing about. Without even talking about the game itself, there were huge, huge issues with… well, basically everything but the controls. It ran at an enforced 1280×720 resolution. It had no fiddly graphical options. Pressing Escape instantly quit the game, with not even so much as a “Are you sure you want to do that?” prompt if you were running in full-screen. It was rubbish.

On the bright side it had both Japanese and English voice acting, it had mouse and keyboard controls that actually functioned and were generally pretty sensible, and it gave you the option to have on-screen prompts and tutorials mention keyboard controls instead of gamepad buttons. Which is something that many significantly better ports still fuck up, so that’s quite something. 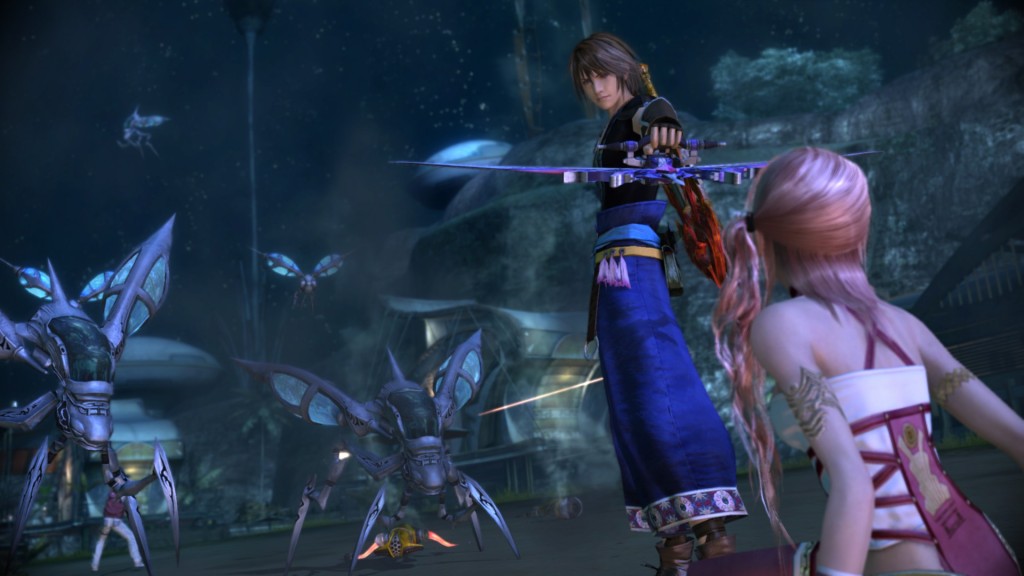 There has got to be a less threatening way of handing someone a bow.

Have Square Enix learned their lesson with Final Fantasy XIII-2? Is this a Good Port? Um… not quite. It’s significantly better, but it’s got a few problems of its own.

Okay, so after downloading and running the 28GB game (which is a damn sight better than Final Fantasy XIII‘s 60GB insanity, so that’s something) the first thing you’ll see is the launcher. This offers basically all the graphic options. 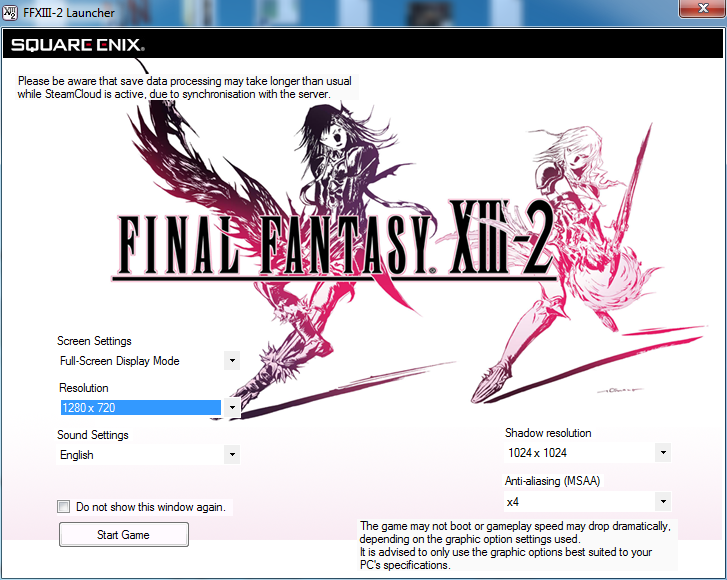 Then there’s the MSAA, which goes from 2x up to 16x. These aren’t the most wonderfully fiddly options you’re likely to see in a game, but it’s a giant leap forward from Final Fantasy XIII‘s “PCs are basically just oversized consoles, right?” settings. 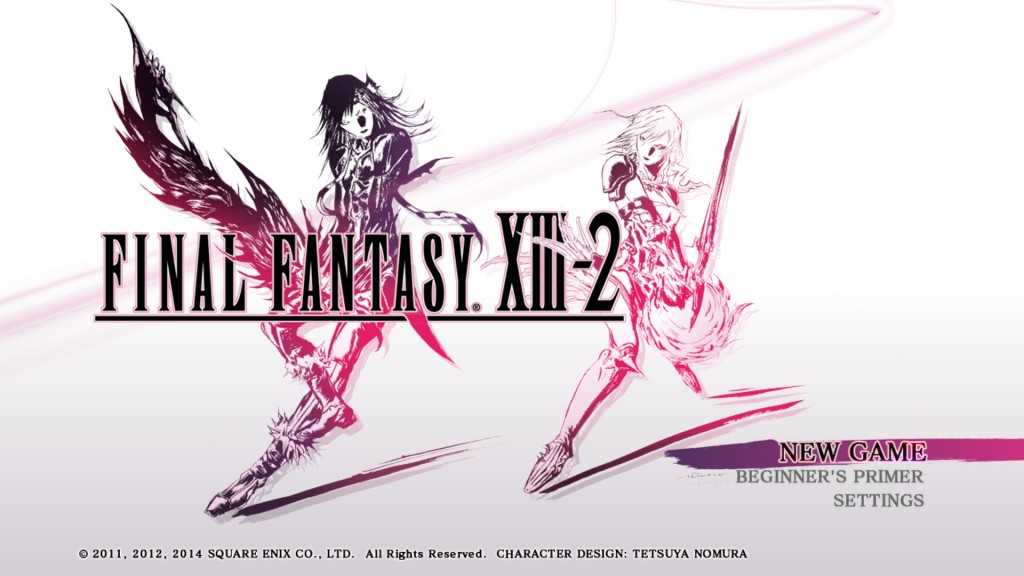 The in-game options menu is nothing overly special, offering much the same as its predecessor. We’ve still got the option to have in-game prompts for either keyboard or gamepad., and we’ve got lots of minimap settings and sensitivity settings and so on. Fair enough. 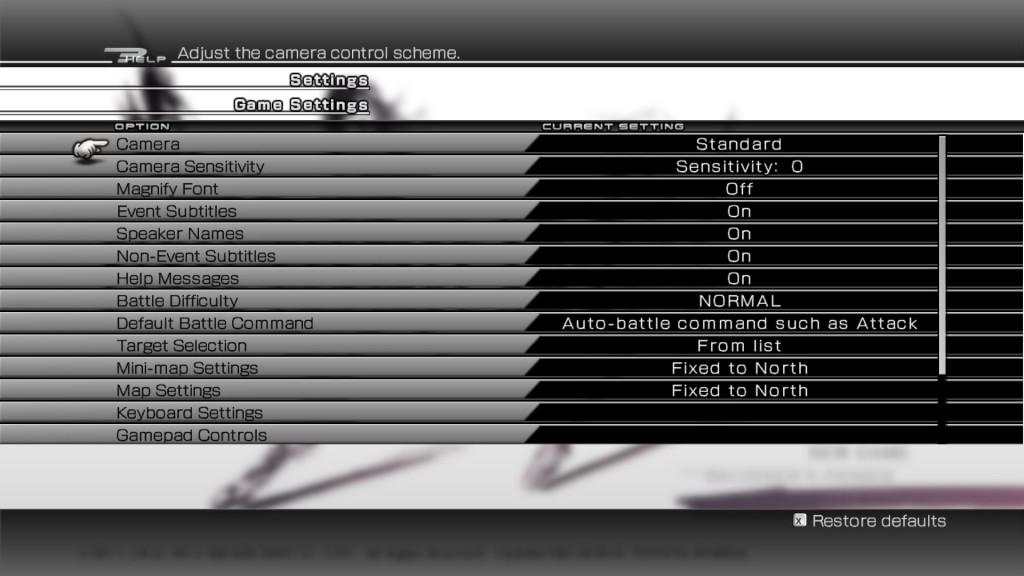 The obligatory “most of the options, except for the ones you have to scroll down for” screenshot.

This is also where Final Fantasy XIII-2 passes the second test, because even in fullscreen, pressing Escape brings up a prompt that essentially says “Are you actually sure you want to quit the game? Because that’s what the Escape button does. You might’ve just been wanting to backtrack through a menu, or something, but here, the Escape key actually kicks you back to the desktop. Do you want to go back to the desktop? Was that what you wanted to do? Really?”

Alright, so it actually just asks if you want to quit, but we all know what it’s really saying. So that’s the second checkbox ticked: you can no longer insta-quit the game without saving due to pressing a key that, in basically every other game on the planet, takes you to the options menu. It is somewhat horrifying that I even had to write that sentence.

Also, there’s a “Beginner’s Primer” option which narrates the entire story of Final Fantasy XIII on a chapter-by-chapter basis. It’s a bit dry, but hey, it’s there. 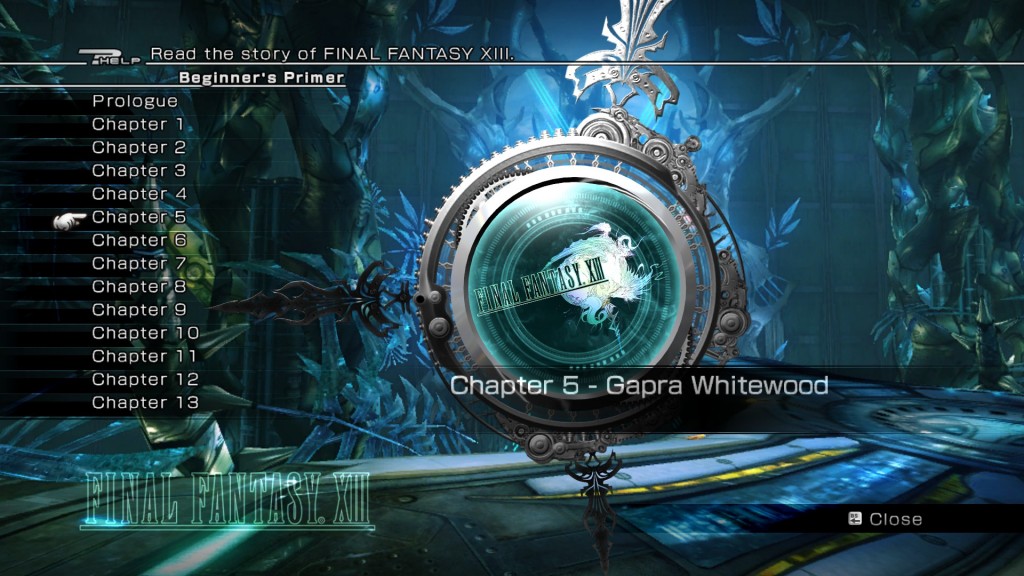 Enough of that. Let’s actually get to the game part of the game.

First impressions: I’m almost certain that the FMVs are still in 1280×720 and are just being resized to fit the higher resolution, but I’m not actually complaining about that. I wasn’t expecting them to suddenly be re-rendered into higher resolutions, and they certainly don’t look bad. 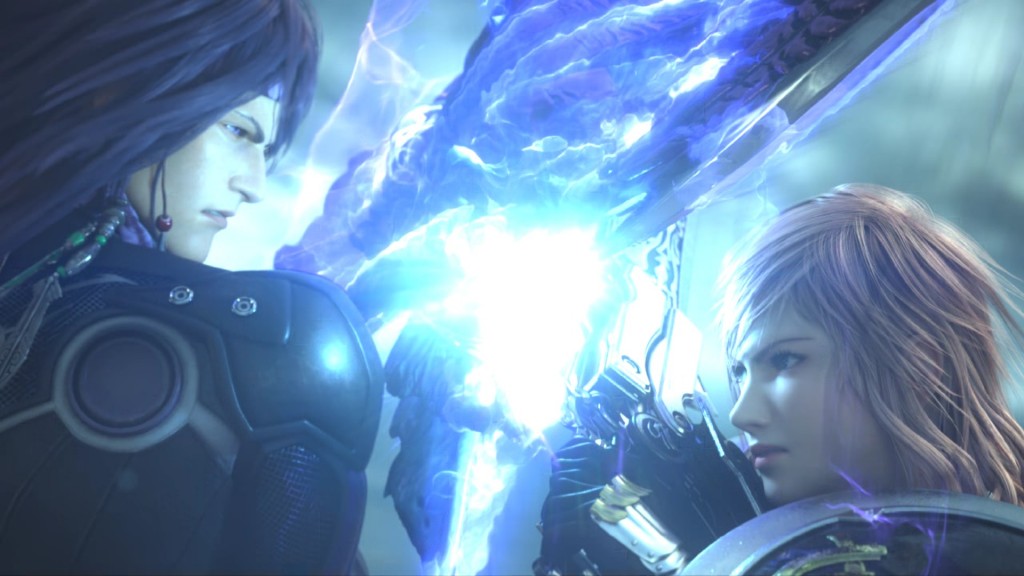 See? It looks quite nice!

Second impressions: holy shit, I’d forgotten how silly this game was. The villain looks like he’s from an 80s glam-metal band, the dialogue and actions are straight out of a cheesy Saturday morning cartoon, and…. okay, look. Lightning is dressed like Athena and is riding a robot horse into battle against a man named Caius Ballad who looks like the missing member of Poison, and who is shouting things like “HUSK OF THE WANDERING COMET, I SUMMON THEE!” That tells you basically everything you need to know about the intro. It’s still no Final Fantasy X-2 in terms of joyful idiocy, but the intro is damn close. 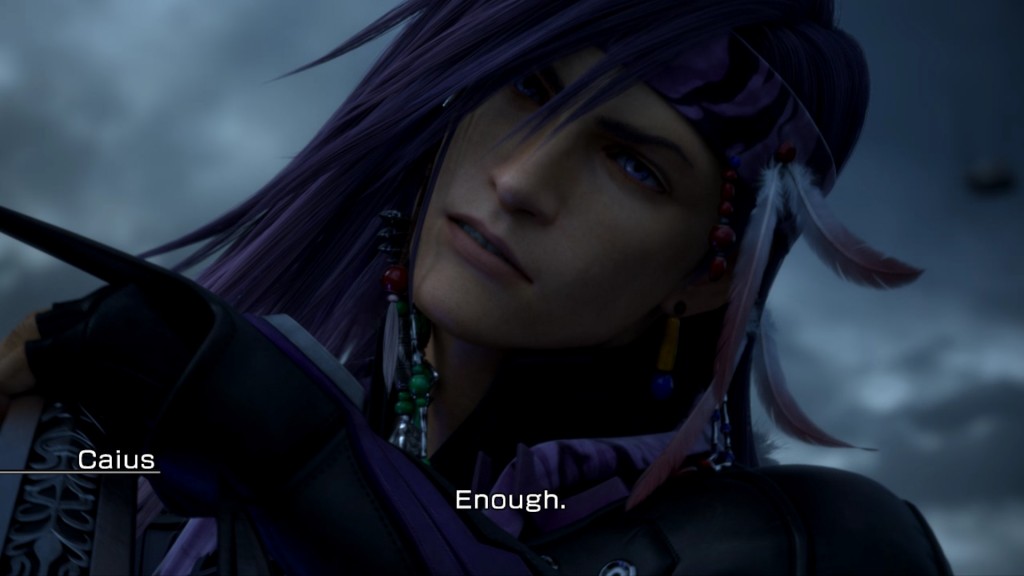 You really should’ve said that to your stylist.

The in-game graphics hold up rather well, even on fairly middling graphical options. The textures don’t look fantastic when in a full close-up but those are relatively rare because Final Fantasy XIII-2 is far more keen on dazzling you with spinning cameras and pyrotechnics and swordfights (while on the back of robohorse) against giant flying demons. 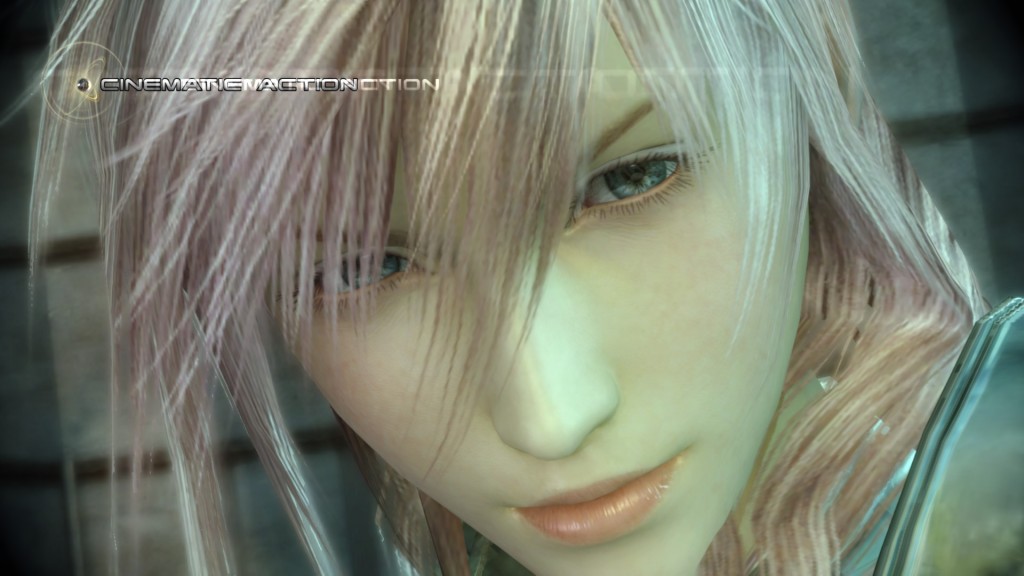 The hair and textures don’t look great in super closeups, but… 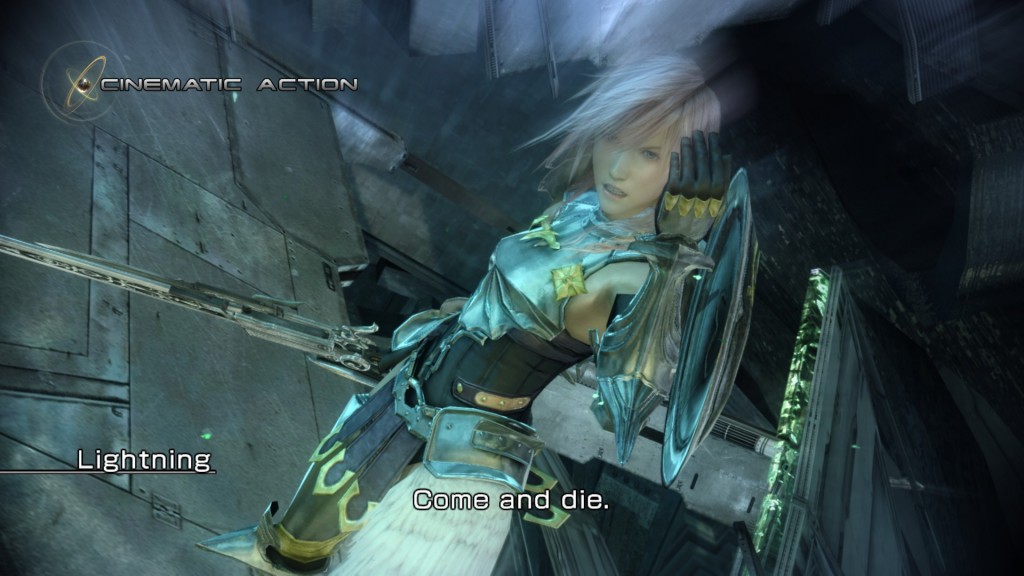 …most of the time, the game looks just fine.

The controls, too, are pretty sensible. In battle you can use WASD or the mousewheel to scroll through options, and either Return or a left click to select them. I did raise an eyebrow when I discovered that Backspace was jump, but that’s also bound to the right mouse button, so that’s fine too. All in all, this looks like an inoffensively standard port – which I’m actually pretty happy with.

(Note: a quick glance at the Steam forums seems to indicate that the QTE button prompts are locked to keyboard, even if you have the game set to display gamepad “hints” instead of keyboard ones. I haven’t verified this, but it seemed worth mentioning.) 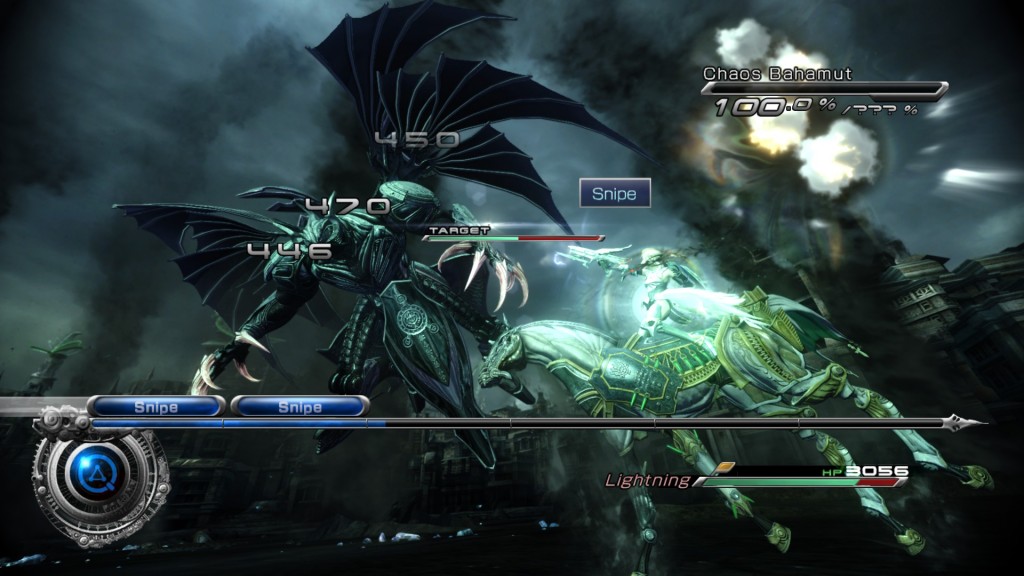 There’s just one problem, and it’s a bit of a big one: the framerate.

I’ve had a hell of a time trying to work out what’s going on with the framerate. I’ve got a sneaking suspicion the game enables and disables VSync whenever it feels like it, and while I don’t really have any desire to go into the arcane details of VSync here, this basically means that the game wildly shifts between 60FPS, 30FPS, and 15FPS depending on what’s going on. Except for when it doesn’t.

I went with the unscientific option of opening up FRAPS and keeping an eye on the framerate in the corner, which might have confirmed my suspicions. At times, the game was running at 60FPS. At times, it was locked to 30FPS. Once or twice, it dropped to a hard 15FPS. It didn’t really hang around in between… except on some occasions when it did, and I actually have no idea when those were and what triggered them. It’s possible there is no VSync and my computer was miraculously holding steady at either 15FPS or 30FPS! It’s just very, very unlikely. 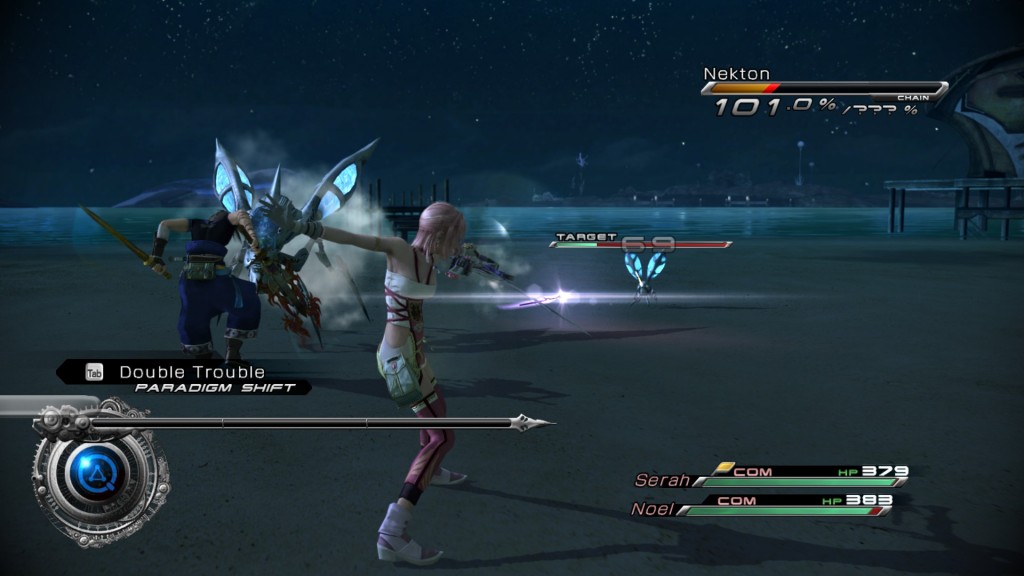 I could sit here analysing whether or not it’s using VSync and when it’s enforced, but none of that changes one simple fact: the framerate is really wonky. When it first left the pre-rendered cinematics and went to the in-game engine, the framerate was painfully low. After five seconds or so, it picked up and started running really smoothly, and everything was basically fine until we switched to Serah at New Bodhum. Here, the framerate just wouldn’t go above 30FPS. Hell, when the battle on the beach kicked off, it dropped down to about 20FPS (and when the Mystery VSync kicked in, it sat at 15FPS for awhile). My computer is powerful. This seemed unacceptable. 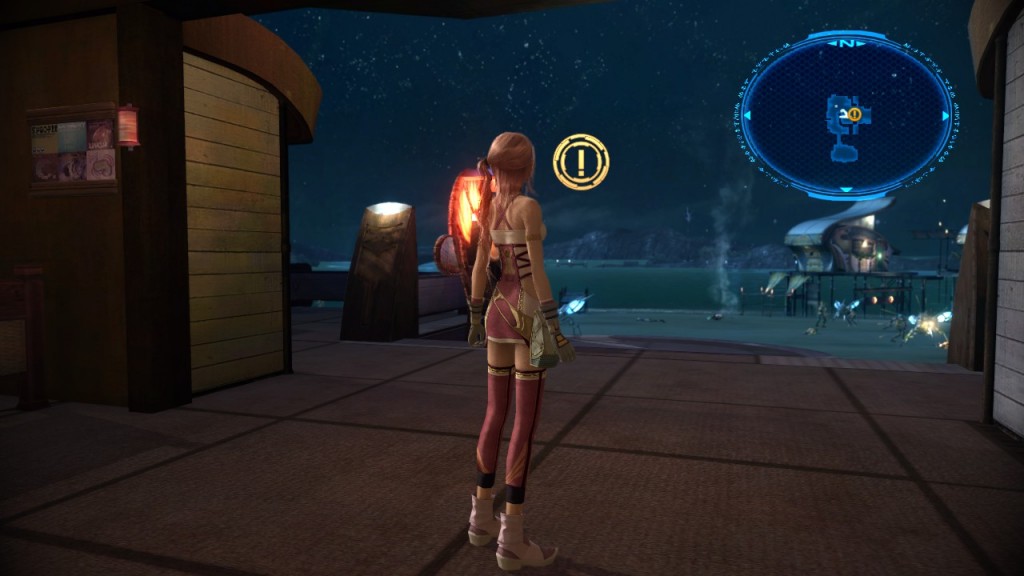 And that’s where my adventure in Final Fantasy XIII-2 ended – for now, at least. I wanted to get these initial thoughts up as quickly as possible, and I didn’t want to sit through the Serah-meets-Noel cutscene in New Bodhum for a third time just yet. 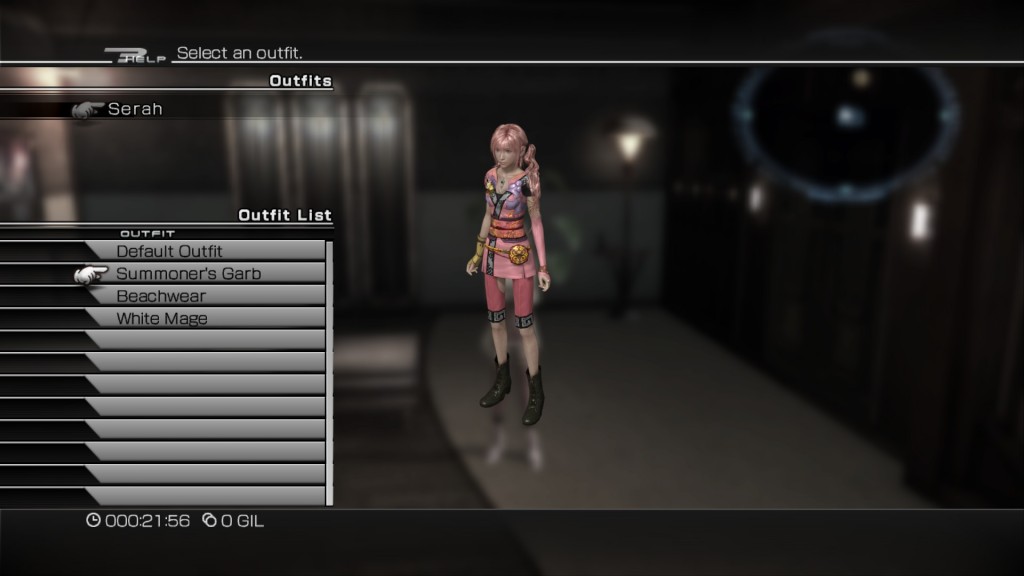 Oh: the DLC costumes are in, though. So that’s nice.

My thoughts, then, are that Square Enix have actually taken a lot of the criticism of the Final Fantasy XIII port on board. Most of the huge problems, like the desktop insta-quit and the total lack of resolution options, have been fixed. This has apparently come at the cost of an even worse framerate, though, for reasons that are entirely beyond me. As far as I can tell they don’t seem to be linked to any of the actual graphical options, which makes me wonder if it’s simply an optimisation issue. It’s worth noting that I didn’t have framerate issues with Final Fantasy XIII – that ran at 60FPS! So whatever this is, it’s a bit baffling.

I’ll do a bit more investigation later tonight. If I turn up anything I’ll update this post and let you all know, but don’t hold your breath – I’m not convinced I’ll turn up some magical solution as to how to fix this, or even figuring out why it’s happening.