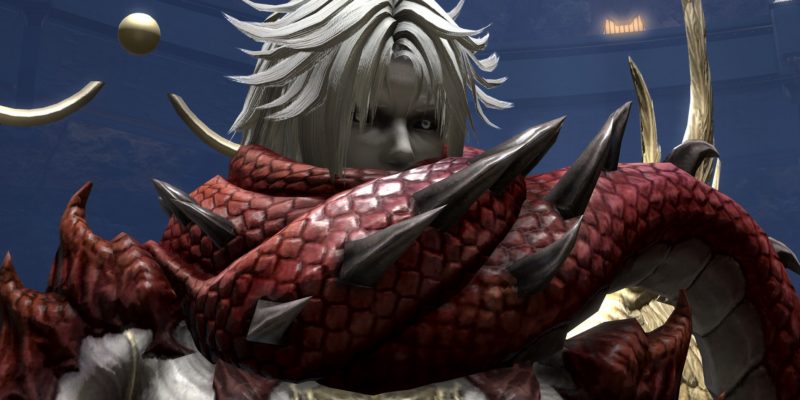 And now, Final Fantasy XIV: Shadowbringers takes a turn for the surreal. Eden’s Promise: Anamorphosis, the penultimate stop on Ryne and Gaia’s Wacky Ride, pits you against the Fatebreaker. Who appears to be a horrifying amalgam of Thancred and Ran’jit. Not a mental image I needed, really.

After the last fight (and the horrifying confusion of me trying to explain how Shadow Implosion works) you may understandably be worried. Don’t panic; Fatebreaker is much, much more straightforward.

There are definitely a few tricks to bear in mind and some things that’ll catch first-timers off guard. For the most part, though? You should be able to get through this (and understand what the hell I’m trying to say) much more easily. Onwards to the Eden’s Promise: Anamorphosis guide!

Most of Fatebreaker’s attacks are nothing you haven’t seen before, but three things here bear mention. First, Burnt Strike, which is pretty much Fatebreaker’s signature move. Pay attention to the color of the energy crackling around him as this is being cast, because that tells you what you need to do. If it’s fire, the AoE will have added knockback; stay close to it. If it’s lightning, the AoE will actually be wider than expected, so stand back. And if it’s light, all players will wind up with an AoE under them, so move away when they appear. 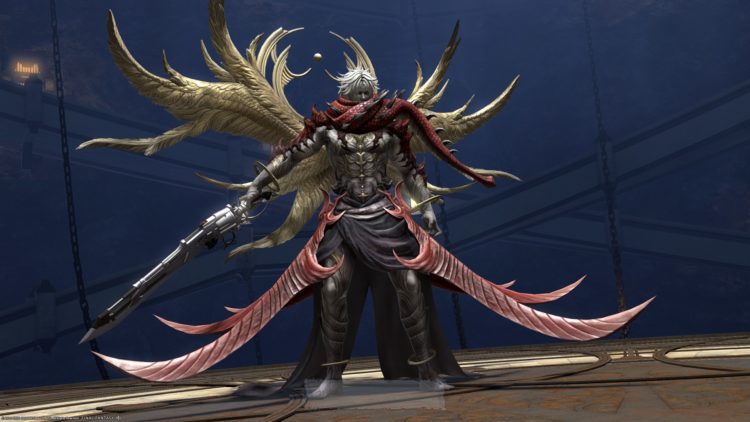 Second, Turn of the Heavens. Again, pay attention to whether it’s lightning or fire around Fatebreaker as this is being cast. Nine halos appear around the arena, and while all of them will deal damage under them, the ones that match the color of the energy around Fatebreaker when the cast was happening will also explode into a small AoE. Basically, stay away from those, but don’t stand under any of them either.

Third, Prismatic Deception. Run around the outside of the arena to see where the three AoEs are going to go, and then stand in a safe spot. If you can handle these three, then nothing else here should really surprise you.

Burnt Strike – A column AoE that will have an after-effect depending on whether the dragon has passed on lightning or fire (signified by, well, whatever color and effects you saw when the dragon was flying around Fatebreaker). If lightning was passed on, the AoE will expand by about another 50% of its width on either side and hit that area a moment later. To avoid that, stand further away. If fire was passed on, the AoE will have massive arena-wide knockback. To avoid getting knocked off the edge, stand as close as possible to the AoE in the dead center of the arena, without being close enough to get hit. 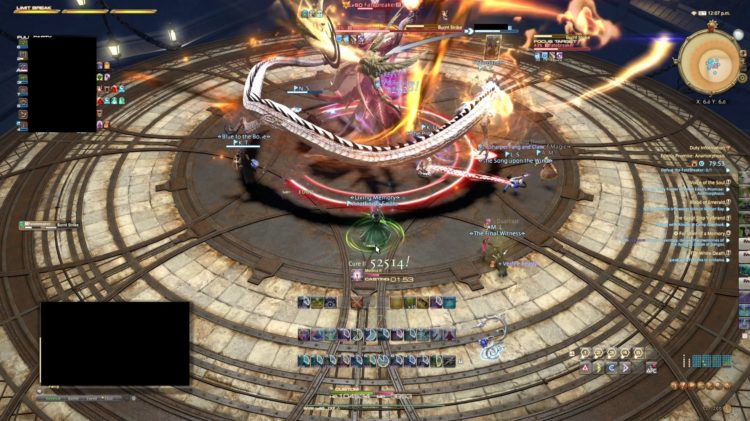 Fortunately, it’s fairly obvious to tell if it’s going to be fire or lightning.

Later on, this attack can also be light aspected, which is much easier to deal with. That just places a circle AoE under each player when the cast finishes. Casually walk away to avoid. If you must, you can all stack up but unless you’re spread out at perfect intervals, there’ll be safe spots.

Bound of Faith – Depending on the aspect, this may be a stack marker on one player, or a targeted AoE. React as appropriate.
Burnished Glory – Unavoidable raid-wide damage.
Powder Mark – Tankbuster. Also applies a debuff that effectively turns the player into a bomb, causing an AoE to explode around them roughly 15 seconds later.
Turn of the Heavens – As ever, pay attention to whether lightning or fire was swirling around Fatebreaker. Nine circles will appear around the arena, each either blue (lightning) or orange (fire). All of them will deal damage to anyone standing underneath. However, whichever ones Fatebreaker was aligned with will also explode in an AoE around them. As an example, if fire was swirling around him then all the orange circles will do damage in an area around them, so stand away from those. 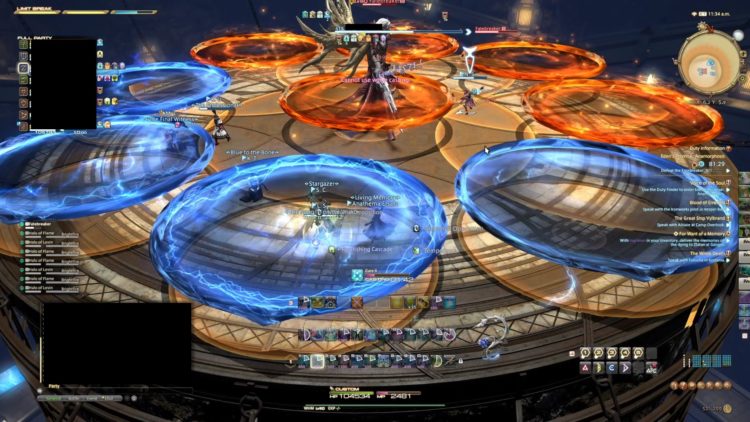 This is right before a fire-aspected Turn of the Heavens hits, so you can see the AoEs and safe spots here. There’s plenty of room near to the lightning halos.

Shifting Sky – Fatebreaker will leap away. Unavoidable raid-wide damage and a knockback in the center of the arena as his dragon lands. Stay as close to the middle as possible, and then run behind it to avoid an AoE that hits everywhere but behind.
Fatebreaker’s Image – While the above is going on, two Fatebreaker’s Images will spawn and begin casting Burnt Strike. Again, pay attention to the colors around them to figure out whether the column AoE is going to expand or whether it’s going to cause knockback.
Prismatic Deception – Three Fatebreaker’s Images will appear around the arena. When the cast finishes, they’ll leap away and turn invisible. You can only see them if you’re close to them. Fun around the outside of the arena to find out where they are (and where their column AoEs are going to hit) and then move to a safe spot. Their column AoE is, I believe, an instant kill. 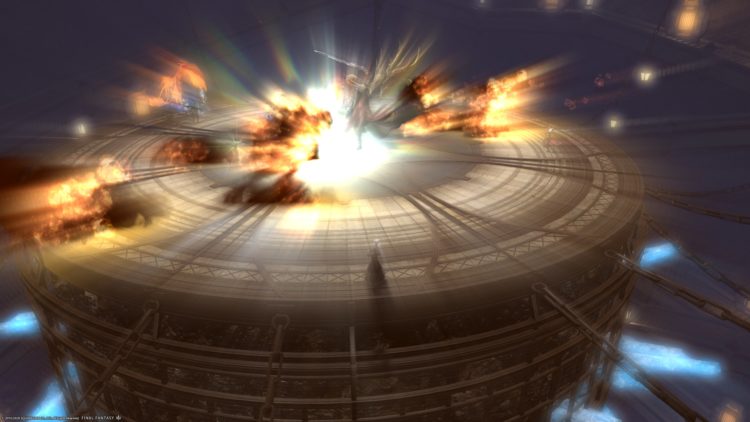 Naturally, the Gunbreaker elements of the fight mean that your screen is occasionally going to be forcefully smeared in visual effects.

If you’ve read our Eden’s Promise: Anamorphosis guide this far, you’ve got a pretty good handle on how this fight works. If there’s one thing to remember — and one thing alone — it’s to pay attention to the energy around Fatebreaker. Seriously. This is usually the difference between survival and death. Burnt Strike can really easily knock players off the arena if it’s fire-aspected, and while you’ll survive most other attacks, you don’t really want vulnerability stacks.

Most of Fatebreaker’s other attacks are easy enough to deal with. Stack or split as needed; heal and mitigate through tankbusters and raid-wide damage. The only real trick here is how his attacks are impacted by the fire/lightning/light aspects. Get a handle on that, and you’ve got this fight down.

With Eden’s Promise: Anamorphosis down, you’ve only got one more battle left to completely finish both Eden’s Promise and the Eden raid series as a whole. Head on through to our guide hub for more info on how to handle the rest of them.

By Jason Rodriguez38 mins ago
Guides