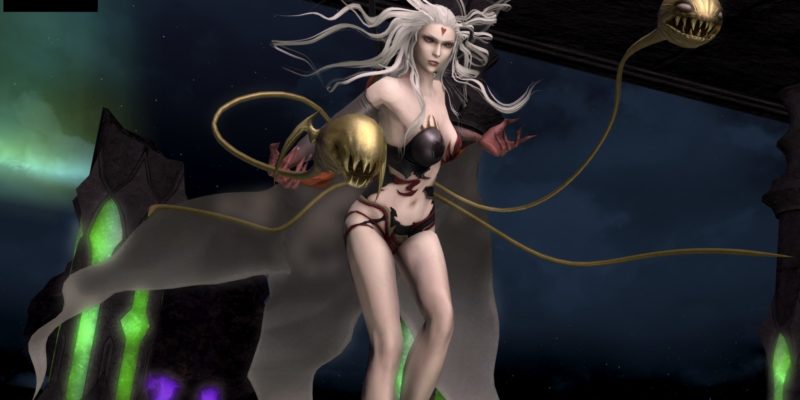 We’re finally here. Patch 5.4 brings with it the culmination of Final Fantasy XIV: Shadowbringers‘ Eden raid series. These four battles will test your mettle, your brains, and your memory, so it’s a good thing I’m here to offer up help, eh? First things first, an Eden’s Promise: Umbra guide.

The first battle of Eden’s Promise — which is the grand name of this final section of the raid — is against a foe you might not have expected to see again. Eden’s Promise: Umbra has you face off against the Cloud of Darkness once again, but unlike the World of Darkness battle where she was the giant green face from Final Fantasy III, she’s in her Dissidia form here. She also has an array of new tricks. And thorns. And disappearing platforms. Good luck.

“Dodge all of the AoEs” isn’t very helpful, is it? So, okay. You can roughly divide this fight into three phases: the beginning phase, the grid phase, and the thorns phase. After that, the three phases loop with extra mechanics.

In the beginning phase, just dodge the AoEs and stand in the meteor towers on subsequent loops. Standard Final Fantasy XIV fare. The only one that’ll catch you out here is Art of Darkness: the side it’ll hit is only telegraphed by the glowing ball next to Cloud of Darkness (which is technically the end of one of her tentacles). Do not stand on the same side of the arena as that ball. 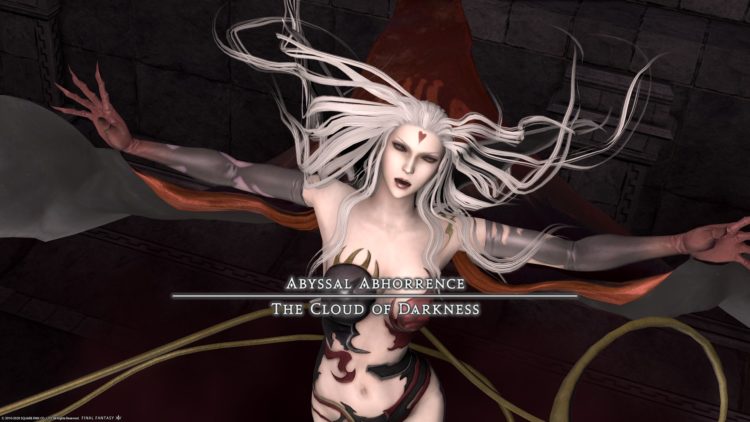 In the grid phase, whenever the square you’re on gets a purple border around it, move to a new square. You still need to watch out for AoEs, though. On second loops through this phase, beware of the Summon spell: this’ll render two sides of the arena dangerous to stand on, and Anti-air Particle Beam means the center squares are also rather dangerous. Likewise, be sure to kill the Hypercharged Clouds when they appear. While you can survive Cloud of Darkness getting a damage increase, it’s as avoidable as it is unpleasant.

The thorns phase is probably the nastiest of the lot. First, do not stand in the big thorn bushes, but if you need to be told that I’m not sure how you got this far. Second, run away from the tethers to break them. When Wide-angle Phaser is cast, move to the side Cloud of Darkness is about to leap to in order to avoid it. As for Rejuvenating Balm, stand between Cloud of Darkness and a thorn bush which isn’t on the sides of the cast, as close to the thorn bush as possible, to avoid it. Later, she’ll combine this with Art of Darkness. There is a brief period of time between the Art of Darkness cast and the Rejuvenating Balm AoEs going off, but there should be a tiny bit of safe space between both of them. Note that Art of Darkness hitting you is probably an instant kill, though: the knockback will either send you off the arena, into a thorn bush, or into the AoE. 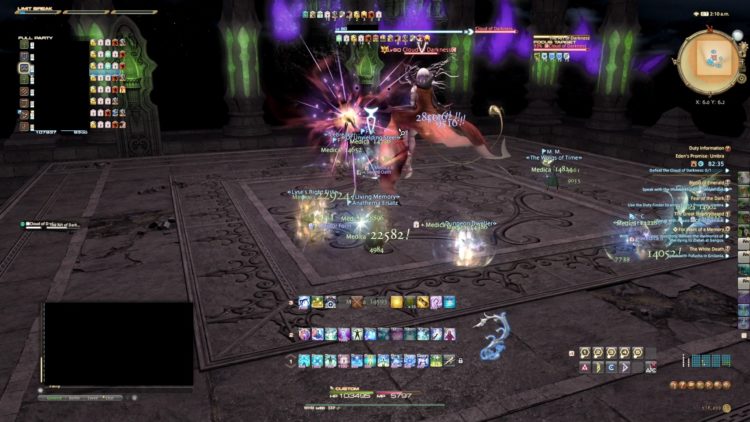 The big glowy ball just to the left of the boss indicates that Art of Darkness is going to hit the entire left side of the arena. As such, we rapidly need to move to the other side. You may want to turn off extraneous spell effects to make this easier to see, if you haven’t done that already.

Ground-razing Particle Beam – Unavoidable raid-wide damage.
The Art of Darkness – A glowing ball (well, glowing tentacle) will appear to either the left or right of Cloud of Darkness. When the cast finishes, whichever half of the arena the ball is on will be hit with an unmarked AoE. Be on the opposite side of the ball to avoid. Also causes knockback, which will be important to remember later.
Wide-angle Particle Beam – Conal AoE that targets one side of the arena.
Zero-form Particle Beam – Tankbuster in the form of a line AoE. The targeted tank shouldn’t be standing next to the rest of the party. Mitigate as needed.
Empty Plane – Unavoidable raid-wide damage, and a transition to the grid phase. 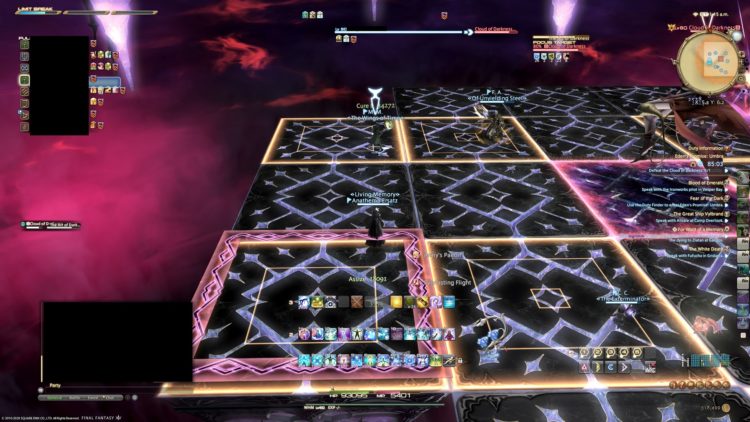 Once the purple border appears around a square, you’ve got a handful of seconds to get off it before plummeting to your death.

Flood of Emptiness – The squares at the corners of the arena and the square under the Cloud of Darkness are marked with AoEs. The ones at the corners will be destroyed with this cast and anyone standing on them will fall to their death. Meanwhile, the one under her will become a damage zone throughout the phase. Don’t stand on the glowy tiles, basically. Standard stuff.
Flood of Emptiness after-effects – Not a separate cast, but needs a separate discussion. Once the Flood of Emptiness cast finishes, all raid members are afflicted with Cloying Condensation that prevents them from jumping. Also, all “squares” on the grid will light up as players stand on them. After around six seconds of standing on a square, it will be surrounded with a purple border. Roughly six seconds later, the square will vanish if you’re still standing on it, and the player(s) standing on it will fall to their death(s). In short: don’t stand on a square for long. Try to spread out a bit so you’re not overlapping on squares, and once you see the purple border, move to a new tile. Squares only vanish if players are standing on them, though, and the timer resets when you move off them. You can safely move between just two squares without problem.
Obscure Woods – Unavoidable raid-wide damage. Removes Cloying Condensation, ends the grid phase, and moves onto the thorns phase. 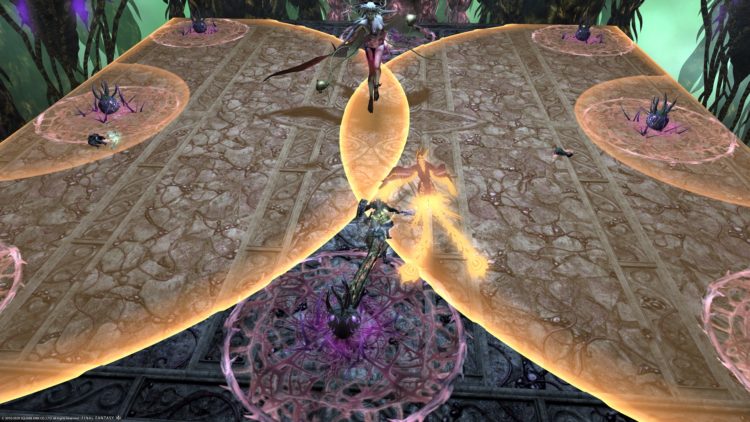 Rejuvenating Balm has a very small safe space, and bear in mind Cloud of Darkness will combine this with Art of Darkness, so one half of the arena will be unsafe. As such, you want to be in front of the thorns to safely dodge that, not to the sides.

Flood of Obscurity – Massive knockback from Cloud of Darkness in the center, and damaging AoE circles around the edges. Position yourself close to the middle, and try to ensure you won’t be pushed into any of the AoEs. Those AoEs will then turn into continuous thorn patches.
Thorn tether – No name here, but immediately after the previous cast, every player will be tethered to a thorn patch. Run as far as you can from it to break the tether. If you don’t then you’ll be pulled into it, briefly stunned, and afflicted with Stygian Tendrils which inflict massive damage over time.
Wide-angle Phaser – Cloud of Darkness will hurtle towards one side of the arena, and then unleash an AoE that hits almost the entire arena. The only safe spots are on the side she’s on. Stand as close to the edge as you safely can, and away from the central thorn patch on that side.
Rejuvenating Balm – Cloud of Darkness tethers to two sides of the arena (east and west, I believe). When the cast finishes, two giant circular AoEs will come out of these sides. The only safe spots are the sides she didn’t tether to, and there’s only a very slim area to avoid these. Stand as close as you can to a thorn patch to avoid — preferably on the side nearest Cloud of Darkness. There’s only a very small “safe” area there, but on subsequent loops through this phase she’ll combine this with Art of Darkness, rendering one side of the arena completely unsafe.
Deluge of Darkness – Massive unavoidable raid-wide damage. Ends the thorns phase, and moves back to the opening phase. She’ll loop through the three phases again, but with new tricks in each. 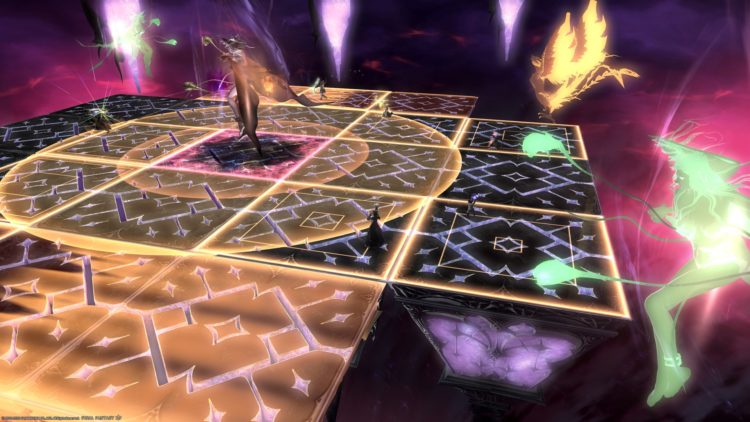 Particle Concentration – Appears in the opening phase on subsequent loops. Four meteor towers appear. Have at least one person stand in each to avoid raid-wide damage.
Hypercharged Condensation – Appears in the grid phase on subsequent loops. Cloud of Darkness creates Hypercharged Clouds to the side of the arena that will slowly move toward her. They’ll give her a damage buff if they reach her before you kill them, so DPS them down ASAP. One will start moving before the other, so target that one first.
Summon – Appears in the grid phase on subsequent loops. Causes two Cloud of Darkness clones to appear at corners of the arena, who will perform a line AoE in the direction they’re facing. Don’t stand on those squares.
Anti-air Particle Beam – Grid phase again. This happens immediately after Summon: while the clones are charging up their line AoEs, Cloud of Darkness will cast this, which is a circular AoE around her. This renders very few squares in the arena safe.

If you’ve read this far then you’re probably good, but the one thing to always keep in mind is to keep an eye on Cloud of Darkness. She has a lot of AoEs that are only somewhat telegraphed (looking at you, Art of Darkness) which you really want to avoid. And while I haven’t repeated the attack descriptions in the Attacks section above, she’ll absolutely use a lot of her general attacks in subsequent phases. But yes, absolutely pay attention to Art of Darkness. It’s very, very easy for that to go unobserved during more complex phases, and it can easily knock you into certain death. 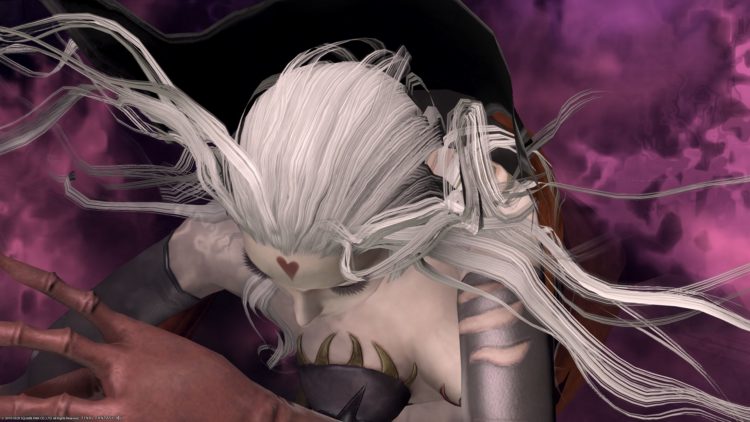 Breathe a little easier whenever she loops back to the beginning phase, because that’s pretty easily survivable. Likewise, the grid phase isn’t too bad once you realize you can stand on a tile for around 10 seconds before it actually collapses under you. Nonetheless, take the purple border as a warning to get off the square quickly. As for the thorns phase? Break the tethers, and be prepared for both Wide-angle Phaser and Rejuvenating Balm. For the latter, try to remember that on subsequent loops she’ll combine it with Art of Darkness, and that pretty much must be avoided.

If you can dodge the masses upon masses of AoEs that Cloud of Darkness slings your way, you’ll be able to make her go up in a puff of smoke. With that, Eden’s Promise: Umbra is finished, and you can move onto the next.

Click on through for more Shadowbringers guides, including the rest of the Eden series.

Fortnite guide: All Season 5 NPC locations and the unique Quests they each offer