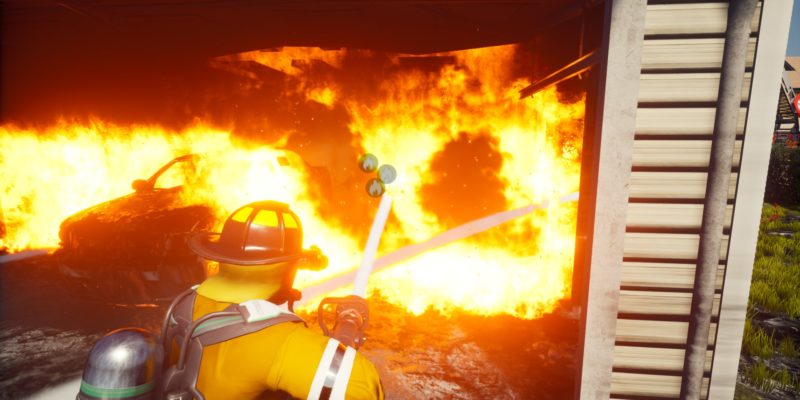 I love games about fighting fires. They aren’t made very often despite the potential that the premise carries. But Firefighting Simulator – The Squad is the second one we’ve gotten this year. And while, yes, you do fight fires, the game mostly is neither fun nor much of a simulator. What we’re left with is a somewhat competent title that gets some things right while leaving other aspects to melt in the flames. Someone desperate for a semi-realistic firefighting game could sink some time into it, but it’s just not everything it could have been.

Firefighting Simulator – The Squad drops you into the lead of a four-man firefighting team. For the vast majority of the game, you’re going to be putting out house fires and smaller, less interesting ones. You’re also going to be driving. A lot. All of the game’s missions are selectable from a map of the game’s open world. Surprisingly, you can’t free roam, and there isn’t a mode where you drive around and respond to random calls, which seemed like a bit of a no-brainer. You simply select a mission and wait for the game’s often insane loading times to pass. Sometimes I literally had to wait minutes for a mission to load, while other times it took practically no time at all.

Once you select a mission, you choose between several different fire trucks that vary by type. Only specific trucks actually let you connect hoses to them. Others come with a ladder or have neither, as they’re for more general use. Each mission starts with you driving to the scene of the fire while making your way through traffic with your siren on. The driving is better than you’d probably expect from a game like this, but having to do it all the time feels like padding. On top of that, the map is fairly large and you’re often tasked with traveling rather long distances. When I’m playing a firefighting game, I have no interest in driving for six entire minutes uninterrupted. 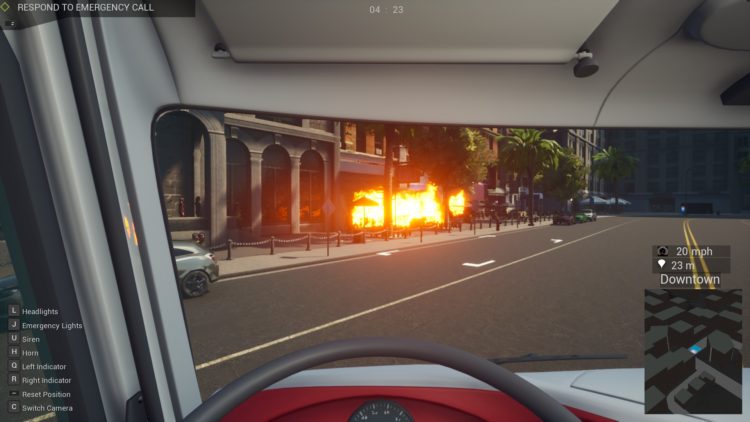 Why is it open world?

There simply isn’t much reason for Firefighting Simulator – The Squad to have an open world. Aside from the fire scenes, there’s nothing to it. It’s just there so that you’ll have a place to drive around in. I get that operating a fire truck with sirens blaring while you see smoke rising in the distance might be attractive to some, but it just feels like a waste of time here. When you turn your siren on, cars will get out of your way, reducing your chances of hitting them. The driving physics are poor and reminiscent of what you’d see in a game from a decade-and-a-half ago. It’s weird to hit a mailbox with a firetruck and get stopped dead in your tracks.

Missions in Firefighting Simulator – The Squad grade you only on the speed at which you make it to the scene and how quickly you rescue any inhabitants and put out a fire. Upon arriving, you’re treated to a 360 sweep that gives you a general idea of what the situation is. It’s usually a house fire. Upon exiting the fire truck, you then need to connect a supply hose to it via a fire hydrant and then connect an attack line and accompanying nozzle. The game is co-op, so yes, you can play with three other people. Otherwise, you’ll need to make do with the AI, which I hesitate to call AI.

To be fair, there are apparently patches coming that improve them, but what I experienced wasn’t AI as much as it was squadmates that are bad at doing what you tell them and wholly incapable of doing anything without instructions. If you don’t tell them to do anything, they’ll literally stand around outside. Which, hey, that’s actually all right if you wanted to do these missions solo. But you probably won’t, as doing so would be a tedious pain. Firefighting Simulator – The Squad is played from a third-person perspective and your character can run and crouch. What they can’t do is move at any speed above a crawl while carrying a firehose or rescuing people. 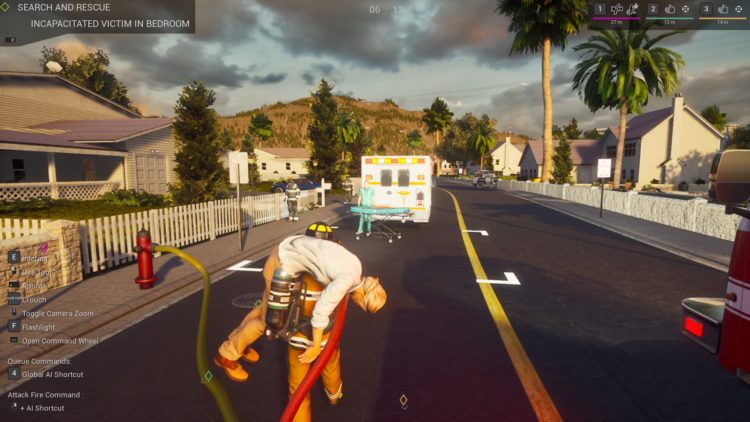 Your first order of business in every mission is to rescue anyone trapped inside. They can die, but I didn’t see it happen often. They don’t have health bars, so I’m not sure how much damage they take from anything. All of Firefighting Simulator – The Squad‘s character models are dated and awful and you’ll be rescuing the same few people again and again. Carrying them is way too slow and clunky, especially when you’re trying to get things done. Thankfully, you can command your squadmates to save them instead, which is vastly preferable. You’ll often have to pry doors open or break windows to get into houses or certain rooms, but you can only carry one item at a time. Meaning that, if you’re carrying a hose and want to open a door, you’ll need to put it down, go grab a crowbar, open the door, put it down, and then pick the hose up again. You’d think a firefighter could carry an ax or crowbar with them at all times, but apparently not.

Inhabitants are usually indicated via markers, and it’s just a matter of getting them out by carrying or leading them to a stretcher behind an EMS vehicle. Once you’ve saved everyone, Firefighting Simulator – The Squad tells you where the fusebox is and you can turn off the power to stop electrical fires from breaking out. On occasion, the fusebox would shut itself off for no reason. Huh. Then you just have your squadmates follow you with hoses and spray the fires until they get quenched. It seems okay at first, but the amount of time it takes to put fires out varies and doesn’t feel right. Honestly, it doesn’t feel much like you’re actually putting the fires out at all as fire doesn’t react to water. You spray and spray until little fire circle icons that indicate how far away that bit of fire you’re soaking is to going out, quenching the fire.

But there’s no realism to any of it. You can leave fires burning indefinitely, and they don’t do structural damage that isn’t pre-baked to occur at specific times. Fires spread unrealistically and make little sense as well. It can take forever to put out a fire because they just won’t go down or the section you quench will just go right back to where it was. Fire often spontaneously appears out of nowhere too. There were times I walked into a totally charred room completely devoid of fire, only to see the walls magically start burning before my eyes. And the hoses! You leave a new hose trail behind you wherever you move, which quickly leads to the ground being completely covered in infinite hoses. It’s surreal. Oh, and sometimes you can spray water even without a supply line. 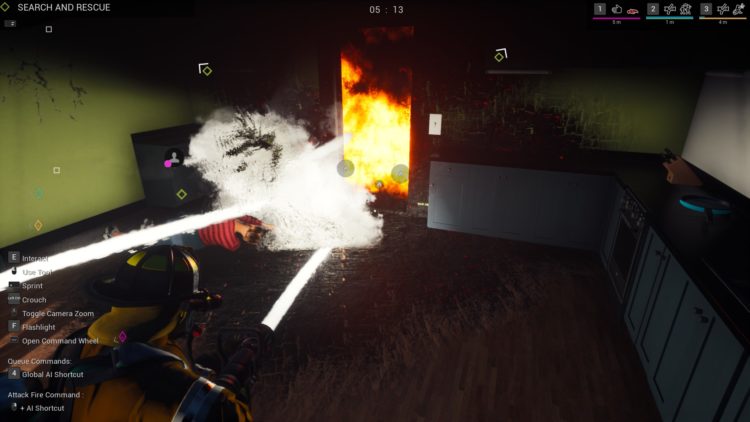 Why is there XP?

Completing missions in Firefighting Simulator – The Squad grants you experience and you’ll need to level up to unlock new missions. This was a poor choice, as you’ll occasionally have to grind to unlock new stuff. But the XP distribution isn’t good and some extremely short, pointless missions are infinitely better for obtaining experience. The game loves to jump between missions where you’re putting out fires in a building and ones where you drive somewhere to put out a dumpster fire or a small fire in a park. Some of these can take as little as a minute. You’ll always put those out with fire extinguishers, which your non-player squadmates can’t use, so an entire four-person team of firefighters gets called to put out fires that one person with a fire extinguisher was more than capable of handling themselves.

I like firefighting enough that I did get some enjoyment out of Firefighting Simulator – The Squad, but the game is tedious and the firefighting just isn’t enjoyable like it is in, say, Embr. The game’s performance is also quite poor, as it has a tendency to hitch regularly, have massive frame drops, and crash. And you can’t save mid-mission, so if it crashes, guess who has to start again from the beginning? It’s a janky game with awful animations that’s way too fond of wasting your time unless you really love walking slowly or driving fire trucks. 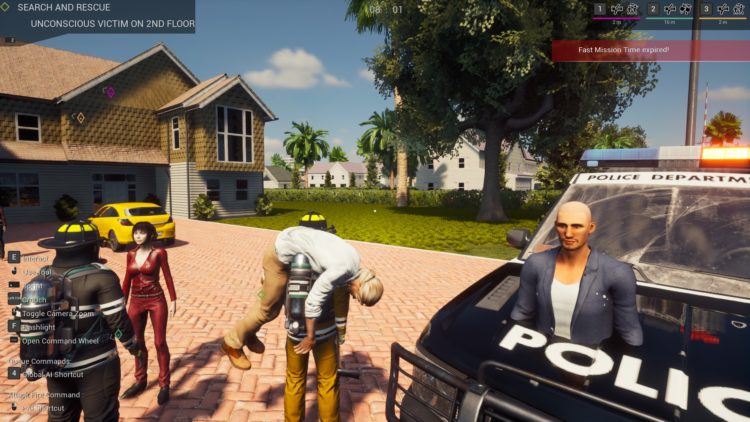 I wanted to like this one but it gets in its own way all too often. It probably would have been a better choice to continue to polish the mechanics, game flow, and animations, since what the game offers just isn't good enough.

By Kevin Foley20 hours ago
Reviews