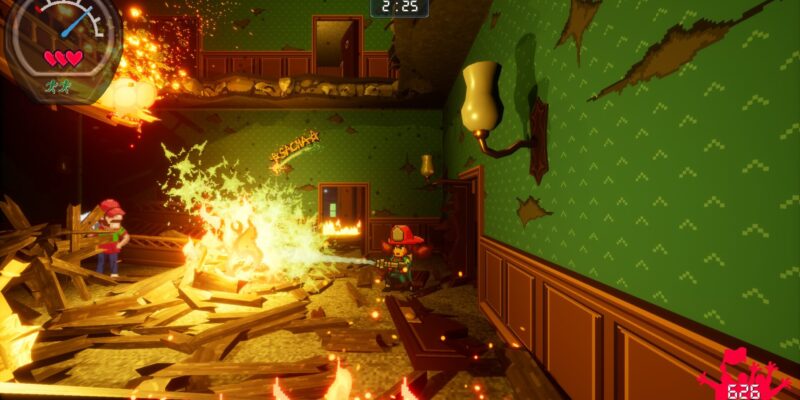 I want to love when new firefighting games come out. It all started with Human Entertainment’s The Firemen, a top-down SNES game where you played as, you guessed it, firemen that charged into burning buildings. Not counting that game’s sequel, nothing has hit the same highs since. After taking a single look at Firegirl: Hack ‘n Splash Rescue, my hopes were, ahem, rekindled. It’s an upcoming 2.5D firefighting game where you play as a firefighter, and the demo is about to make landfall. I got to check out the Firegirl demo early and I was quite surprised by what I found in the preview.

Firegirl‘s titular heroine is the daughter of a famous firefighter, renowned at the fire department at which she starts working. For whatever reason, her exploits are watched by fans, who are represented by a number in the bottom-right corner of the screen. Sometimes they cheer. They also donate money to you after missions. The demo begins with Firegirl arriving at the firehouse, only to be greeted by a “simulation” fire, which turns out to be a real fire that the chief accidentally set because he’s a giant idiot. She then heads inside to rescue someone. What is that fire chief getting paid for?

The graphics in Firegirl felt charming right away. All of the characters and fires are sprites, but environments are 3D. Firegirl can hit things with her ax, use her fire hose, and jump extra high by shooting the hose at the ground. She’ll use the ax to break pieces of debris and smash doors open, but the fires themselves are definitely reminiscent of The Firemen, and the art is effective and endearing. 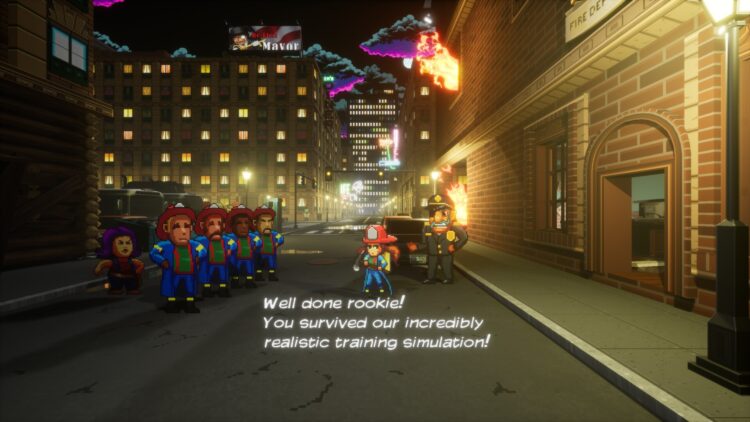 You only get three

Once the tutorial mission is out of the way, you can freely move about the firehouse, which allows you to purchase upgrades, as well as equip badges that grant Firegirl bonuses, such as using less water while on the ground. Water, of course, must be refilled, either by finding bottles or other sources while out in the field. You can go to the fire truck and take on a new mission, which takes you to a procedurally generated level where you’re meant to rescue survivors and get out of the building in one piece.

Strangely, Firegirl is kind of obnoxiously difficult. Your character can only take three hits and many of the hazards are quite hard to dodge. You often have to drop down to levels that are underneath you, but you can only look up and down a bit, which often isn’t enough. You can jump upward to another room, only to get hit in the face by a fire turret you couldn’t see or a bat that happened to be flying toward you at that moment. Even if you don’t get hit, sometimes the people and cats you’re rescuing will be far enough away that you can’t possibly get to the exit in time due to the time limit.

Firegirl has a lot of potential, but this demo preview makes me worry for the main game, as I just felt it was unfair. I hope that demo feedback helps the developer improve things, as I’d love for us to have another great firefighting game after all these years. 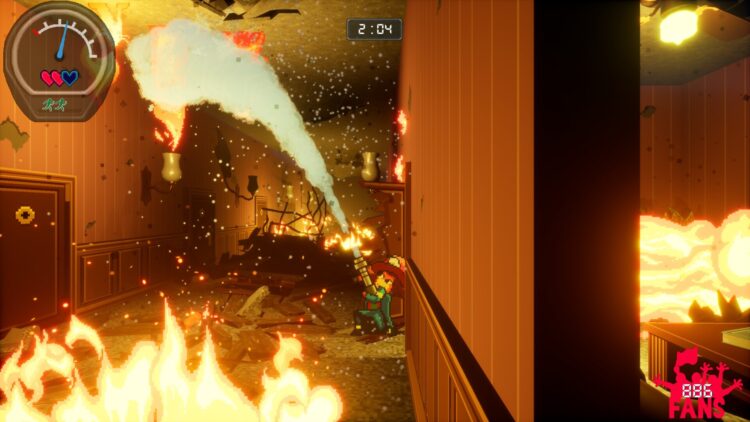 Astria Ascending build guide: The best jobs and skills for each character