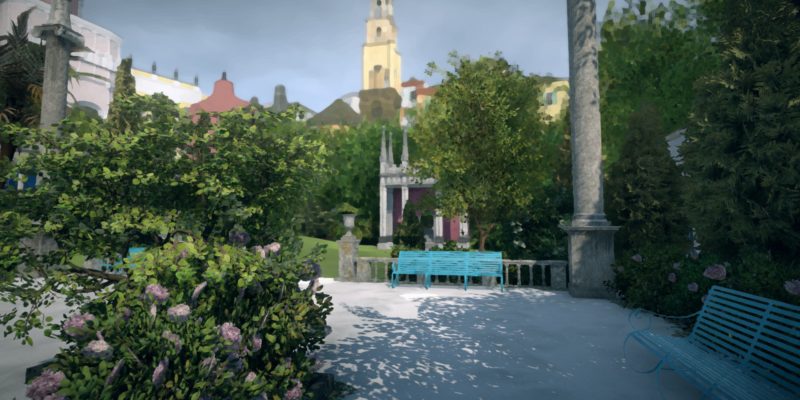 The original Floor 13 was released 28 years ago, back in good ol’ 1992. Today, the long-awaited sequel is finally available. To be clear, I haven’t played the original, but I was intrigued by the premise all the same. Working for a shady government body with the ability to surveil, seize the assets of, or flat-out abduct people of interest from a cushy office for the sole purpose of protecting the governing body? That’s a wild idea for a video game. Floor 13: Deep State allows players to do all this and more, but the question stands: is it worth it?

Floor 13: Deep State begins with you being called in to briefly act as the director for the Ministry of Agriculture and Fisheries. If you can’t tell, that name has nothing to do with your job and is a cover for what you’re actually doing. The tutorial starts you off with briefs on a possible terrorist organization and a suspected member. Upon surveilling them, you discover that they’re up to no good. This tutorial only lasts four days and a year passes before you’re installed as the director proper.

There isn’t a standard story in Floor 13: Deep State. Instead, different random scenarios with random suspects are rotated in. Sometimes you’ll be looking into a horse trader with some curious connections, or the London mayor who’s having suspicious dealings with a celebrity architect. The scenarios are very specific and you’ll likely see them over and over again as you start a new game, so the randomness doesn’t actually go very far. 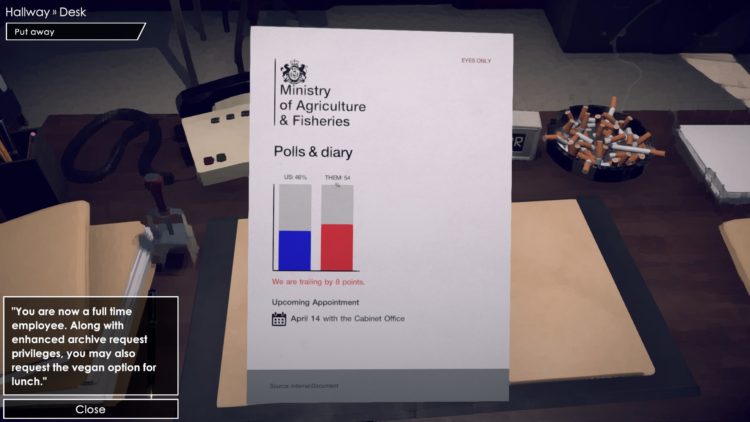 Truth be told, there’s a reason this isn’t a review. The way Floor 13: Deep State works is that you start a new game, do the tutorial, and then you have two weeks that end with you meeting your superiors for a checkup. The game gives you polls and you apparently need to get your party’s standing up to at least 50% in order to pass beyond those first two weeks. And I tried for hours. The game starts you off with 46 or 47% and then hits you with cases that you need to use to get to 50% or higher. If you don’t, you’re forced into exile and have to start over. No, the game never tells you this. Starting over means you have to do the tutorial again too. Every time. I personally did the tutorial a ton of times! It wasn’t fun!

To be blunt, Floor 13: Deep State will pretty much fail you if you don’t do enough. You need to get on top of those suspects and protect the party. But you can’t be too overt, or the game will warn you and threaten to exile you for exposing the ministry. After several hours of trying, I simply couldn’t find a way to get my ratings to 50%. I’d get the same handful of scenarios repeatedly. Even when you know who’s doing what and how to stop it, that doesn’t mean you’re allowed to stop it that way, as making overt moves damages the party and lowers your numbers. But the game’s systems are extremely rigid and I couldn’t figure out how to solve issues to its liking. And there’s no margin for error. If you make a mistake or anything goes wrong, you can kiss your file goodbye, as the game will retire you.

We reached out to the dev and he responded that “the game is hard.” Yeah, okay. Granted, I might just be stupid. But there are bugs too. You interact with everything by entering your office and clicking through pages on your desk, including reports, suspects, and orders. You have teams that pertain to specific ventures, such as searches and abductions. If you have all of your teams active, then you can’t put a team on something until one of their occupying orders expires or is rescinded. 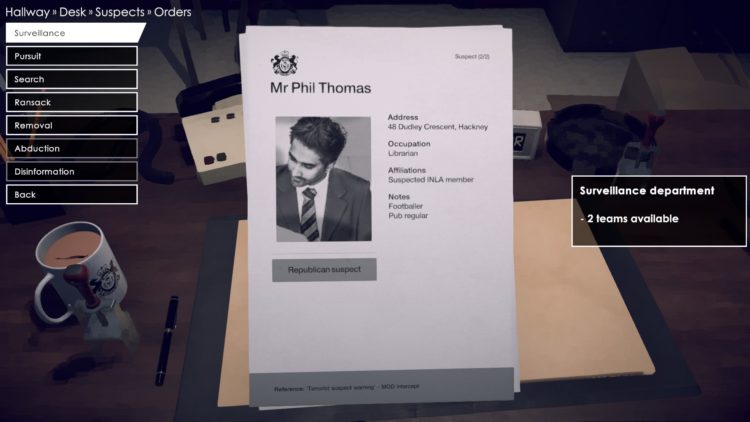 The hardest button to button

But the buttons don’t always work right. Sometimes it’s impossible to bring up the pages you want at all, as clicking the accompanying buttons can bring up the wrong pages. Other times, the interface will stop working correctly and you won’t be able to put orders in place because the button that lets you do that isn’t showing up. I’ve abducted people to avert a tragedy, only for them to not get abducted and then walk into the tragedy regardless. It’s common to assign teams to jobs and they just won’t report in at all.

At certain points in Floor 13: Deep State, you’ll be given a mandatory detour to an area with a stone pillar adorned with faces where the powers-that-be will tell you how you’re doing. During one of my playthroughs, I was summoned on the 9th and told that I was exposing the organization. Then, I was brought back on the 10th for them to tell me that I hadn’t exposed us and to keep up the good work. Then, on the 13th, I was told that I had exposed us severely and would be exiled immediately. During this period, I didn’t make a single overt action. Makes perfect sense! Thanks, guys!

And that’s not all! One time I abducted someone and was waiting for them to confess. When Floor 13: Deep State fails you, it gives you a status screen telling you how you did. I was told that I extracted one confession, even though the game let me know shortly beforehand that he said nothing to his interrogators. From what I can gather, the game is kind of broken. I certainly wouldn’t describe it as “hard,” but I’d say “impossible to parse for most” is more like it. 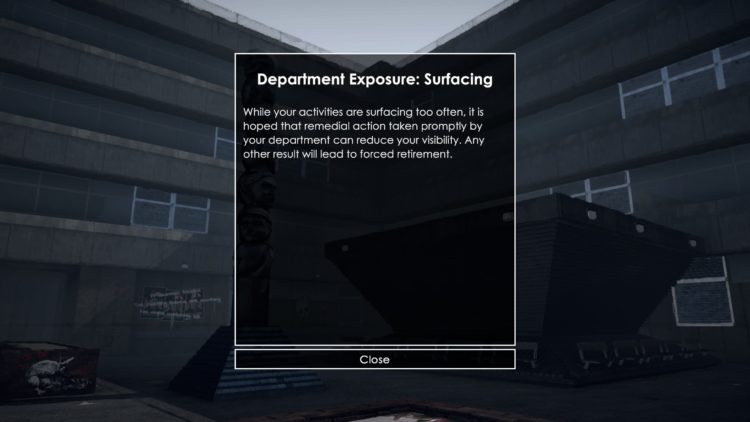 Well, there you have it. As I said, I intended to review this one but ended up butting my head against a solid wall for hours only to have my skull cracked by some of the most rigid, confusing, and outright illogical mechanics I’ve ever seen in any game. Is it worth it? If you’re anything like me, then no, it is absolutely not worth it. But maybe it’ll get patched up quickly or there’ll be plenty of information that reveals that the early game just has an absurdly high level of difficulty that becomes more manageable once you successfully do whatever it is that the game expects you to be able to grasp immediately.