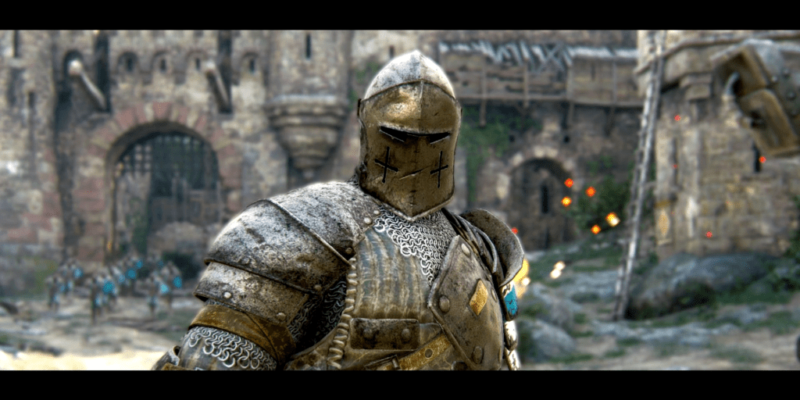 The clash of steel against hard-drive, the roar of the GPU fan. These are the sounds from which the legends of For Honor are born. Well, maybe not the hard-drive one. You should probably get that looked at. Get in on an SSD before the trade war with China.

For the record, the machine I’ve been playing this on is an i5-6600 / 16GB RAM / 4GB 380X (17.1.2 drivers; the latest came out while I was doing this) running Windows 10. You can hopefully judge your own prospective performance accordingly.

Before considering anything else, what you will absolutely need for For Honor is a willing and able internet connection. It’s always wanting to talk to servers, even if you’re just there for some single player missions. If your internet is sketchy for whatever reason, this isn’t the game for you. Not new information. Not particularly surprising information (given the largely multiplayer focus). But information that may prove useful nonetheless.

If you have a functioning internet pipe and Ubisoft’s servers are up (which, at the time of doing this, they were), then congratulations you can now have a look at the PC graphics options. Let’s do just that. 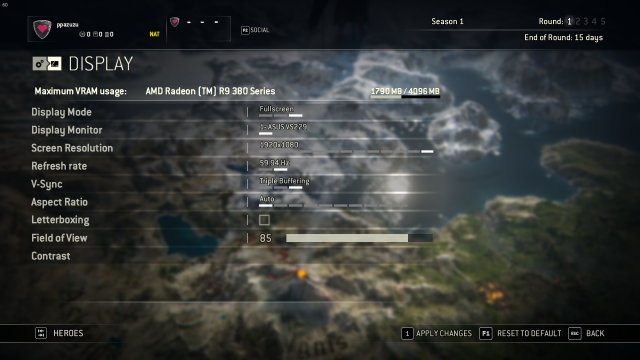 Here’s your Display line-up. The resolution options provided to me (with my bog-standard 1080p monitor) indicated 16:9 and 16:10 support. Under the separate Aspect Ratio tab, there’s support for all kinds of other exotic ratios like 5:4. For you ultra-widescreen folks, 21:9 is in there too – and you’d hope that Auto would default to that if you have one of those screens (I don’t, so I can’t really check).

There’s also a Letterboxing option to tick if emulating 16:9 with black borders seems preferable to your native resolution. I presume that inclusion means certain resolutions will have a stretched image to some degree.

And what’s this, an FOV slider? It goes from 60 (minimum) to 90 (max), which may not sound like a huge range, but actually looks pretty substantial when side-by-side. Like so. 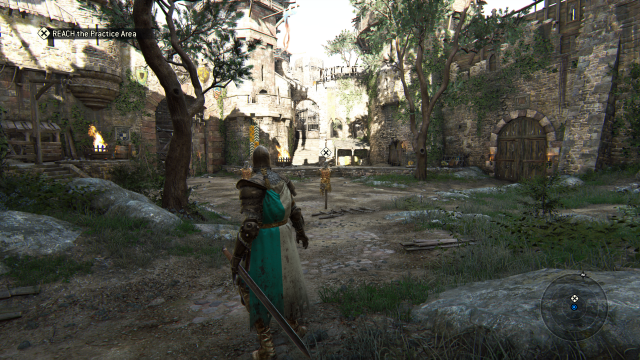 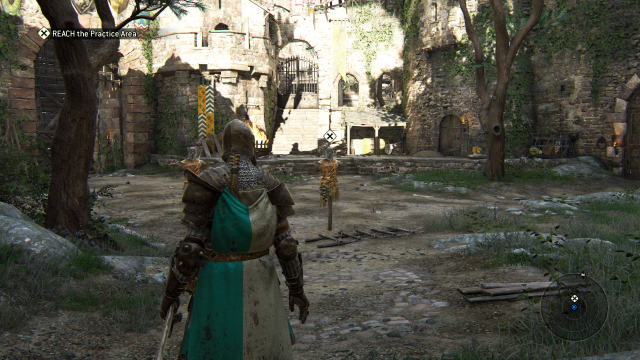 On then, to For Honor’s more specific graphical options, which are one entry too large to fit into a single screenshot. This image cuts off the Quality Preset toggle at the top, which cycles through Low, Medium, High, Extreeeeeeme, and Custom. 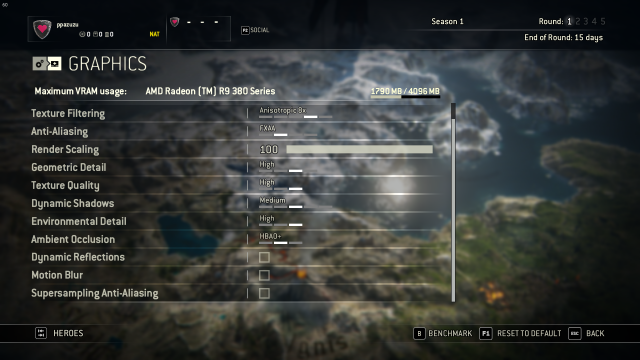 As with the Display options and most of the other menus in the game, For Honor goes out of its way to explain what all of these choices might mean. Hover over the Anti-Aliasing options, for example, and it’ll give you a summary of FXAA, SMAA and TAA along with relative performance costs. There’s a VRAM bar too, to give you an idea if you’re going over what your GPU can handle.

This isn’t quite as useful as Steep’s guide (which also provided little picture-in-picture comparisons of texture levels and so on), but it’s all helpful enough.

Here’s a comparative look at the Lowest and Highest possible settings. Quite a difference in shadow and texture quality once you drop into the lower reaches, which should make the game scale fairly well on older system. 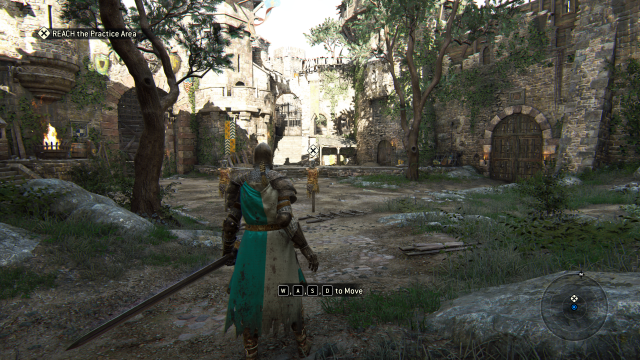 The Practice Area in its highest possible graphical glory. 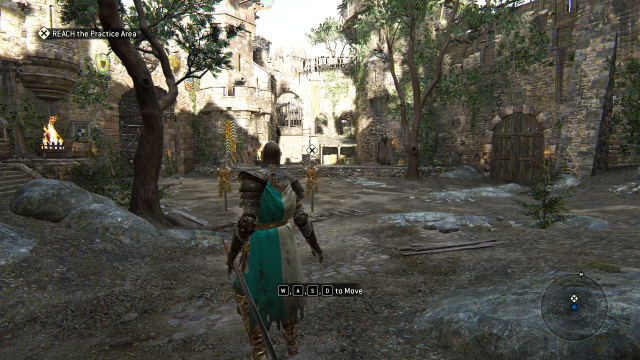 … and its lowest. In which ‘muddy ground textures’ now has a double meaning.

I could probably squeeze out a little more image quality without much of a performance dip, but the settings shown in the graphics menu image above (basically the High preset with AA and Dynamic Shadows taken down a step) have proved pretty steady. The benchmark, which runs through scenes that are about as demanding as the game gets, with a bunch of NPC lads fighting and fires sparking off everywhere, never had me below 66fps and averaging about 80.

That’s been accurate to my in-game experience too, whether in custom matches I’ve set up as tests or in the single player story mode. Performance-wise, For Honor seems well put together, and even my moderate AMD GPU can keep up just fine in this Nvidia-branded title. 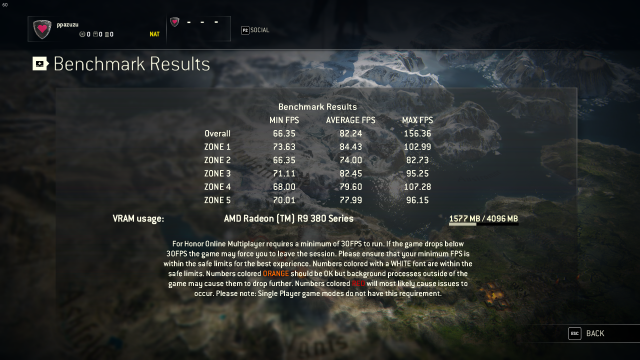 Exhibit A: This very exciting image of some benchmark numbers.

Of course, it’s netcode related issues that should prove to be of most technical importance with For Honor. They’re using P2P rather than dedicated servers, which could be a bigger problem for anybody ‘phoning in’ from less populous countries than a few dropped frames. For what it’s worth, Ubisoft claim there’s no “host advantage” with their particular P2P system.

At this early stage (as I write, the game has only really been ‘out’ on PC for a scant few hours), there don’t appear to be any huge issues with connectivity. Investigations into whether anybody on the P2P system has an advantage of any sort in a 1v1 situation will require more time; and it’s always going to be tough to say whether the player (in this instance, me) being a bit shit is the true cause of a loss.

The player base certainly looks healthy enough on PC. Once the launch flood gates opened, there were about 30,000 people (and climbing) spoiling for a match.

In order to fight, every warrior needs their preferred weapons. On PC, that’s obviously a mouse and keyboard; a combination as timelessly reliable as the sword and board (well, close enough). Let’s see what the For Honor options have in store there. 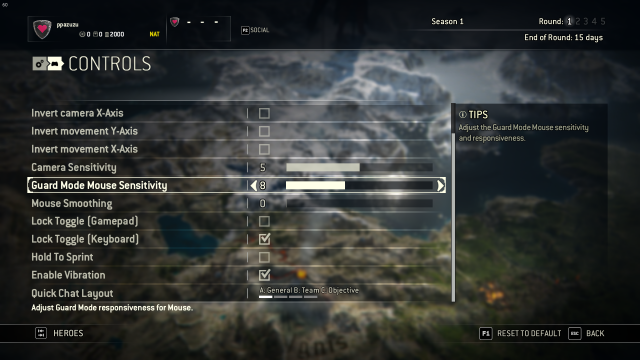 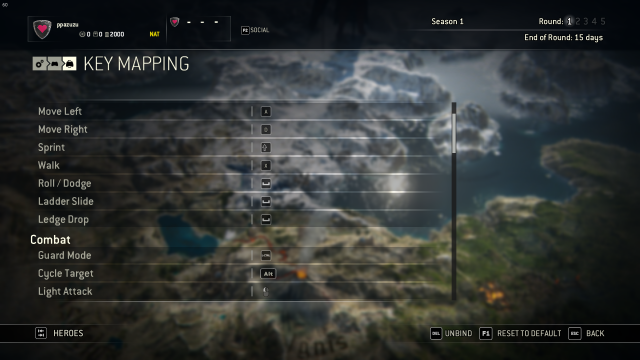 The space bar is doing a lot of contextual work, there.

In the general mouse options area you can ditch Smoothing, and change the sensitivities of both camera and Guard Mode. The latter is important, as it’s this which controls your Up/Left/Right defensive stance during a duel. Having a separate sensitivity slider for this aspect is pretty crucial.

You can also, if you wish, rebind the keyboard controls. With a bit of fiddling with the Guard Mode sensitivity, I’ve found the keyboard and mouse combo comparable to the gamepad alternative. Pulling off a move that’s up on the right stick and pressing the right-trigger is a case of pushing the mouse forward a little and left clicking. People may end up favouring one over the other as personal preference, but they feel roughly equivalent in their input reliability to me.

That does seem to be the point of the game, so if you insist.

As a multiplayer-directed title with a potentially high skill ceiling, For Honor needs to be able to maintain robust performance (to avoid untimely dropped frames during a close fight), have equally reliable netcode in place (in order, where possible, to keep all participants on the same lag-free level), and offer responsive control schemes. The first aspect appears to be in place, with a variety of graphics options available to aid PC players in scaling to a consistent 60fps (or above). Even my relatively middle of the road GPU can cope on higher settings, which bodes well for machines a little longer in the tooth.

Whether you opt to enter battle with your trusty mouse or an esoteric pad-shaped device is a matter of preference, as both appear to offer equivalent control mastery (we may, of course, eventually see a divergence at very high levels of play).

In terms of server structure, there will obviously be disappointment at P2P being chosen over dedicated servers. Based on these (very) early impressions, P2P seems like it’ll be fine for semi-casual play, but whether it’ll be to the liking of those planning on engaging in super serious 1v1 dueling contests is something that further time will determine. As long as you can avoid pesky NAT gremlins, online play should be acceptable to most.

My expertise here isn’t sufficient to be able to evaluate how well For Honor might stand up to professional fighting game scrutiny, but in terms of performance, online structure, and control input, it passes muster for this fairly casual warrior.