When I was presented with BetaDwarf’s Forced I wasn’t quite sure what to make of it. Is it some sort of ARPG? A weird puzzle game? Perhaps an unusual kind of arena battle game?  The answer is this: it’s sort all of these mashed into one.

The game follows the story of some enslaved heroes that are trapped in what can best be described as challenge dungeons. Using your skills in combat you need to fight your way to freedom through a series of trials.

Luckily, in Forced you’re not alone. There’s a wispy looking spirit guide called Balfus hanging around, and this cheery little chap teaches and guides you through the game. He’s also a rather handy companion to have by your side as he aids you in your challenges. These would be pretty much impossible to complete without his ability to hover above the ground like all good spirits do. 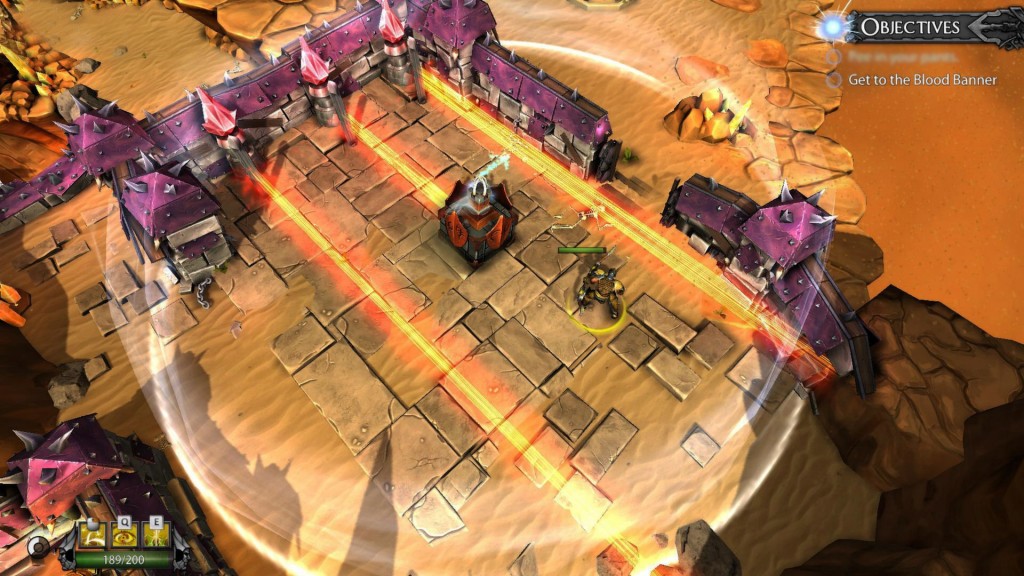 Balfus moves a box around. He’s a clever chap.

Balfus is a key element to the puzzle part of the gameplay. You control his every move, which is no easy task when you’re being attacked by the hideous creatures that lie within each challenge arena. Using the space bar you can instruct Balfus to move towards you, have him stay put, or even tell him to stick to you like glue. With your guidance he’ll perform key activities in each arena, such as activating shrines, moving blocks to trigger pressure pads and carrying vital components like explosive charges. All of which will help you get the tasks complete. He’s a little tricky to get to grips with and his movement and positioning to trigger key elements in the arena can be a source of frustration at the start. You really need to stick with it though, because once you have him under control the game comes into its own.

While you’re thinking about how best to use Balfus to destroy or activate X, Y and Z, there’s the enemy creatures to deal with at the same time. These usually come in waves giving the player time to work on the challenges with your spirited pal. Each arena is entered via a portal in what can best be described as a lobby full of magic doors.

At the start of each challenge, players need to select how they want to play an arena by choosing a weapon type. This could be considered a class selector, but unlike an ARPG, you’re not stuck with the class for the duration of the game. Want some ranged action? Then choose a bow. Want to smash heads with a sword? Then, err, pick the sword and shield combo. You could probably figured that one out. Other options open to you are the big mallet thing (for slow powerful attacks,) or some green dagger-like blades for speedy thrusts.

Now which weapon and skill combo do I choose?

Each “class” also comes with it’s own skills and passive abilities, which is where the ARPG elements slot in to play. The skills you have access to are level-dependent so more are unlocked as you progress. Like the weapons, skills and passives are activated on the character before entering an arena.

The ability to switch weapons and skills is where Forced gets interesting, because each challenge arena requires different tactics to complete. What you used previously may not be quite as effective in a new challenge. There have been quite a few times when I’ve found a ranged character was working wonders, but all of a sudden wasn’t nearly as effective in the next area. For that particular task, a sword, and the skills that come with it, performed so much better. Getting proficient with each weapon type and its related skills is a must if playing solo, which can be hard if you prefer one over the other. Decisions, decisions…

While Forced features what some may consider ARPG elements such as skills and tiered upgrades as you get more powerful, the control system means it plays more like an isometric FPS. There’s no clicky-clicky here. Movement is handled by a trusty WASD config, and you can use the mouse to face in one direction while moving with the keys in another. In other words, when you’re fighting off the enemy it’s possible to be running the character backwards while still shooting at your foe. This was a stance I found myself in quite a lot.

Combat also involves marking enemies each time they are hit. Once they’ve been bully marked, a more powerful secondary skill can be unleashed. Knowing when to use these skills is vital to disposing of the enemy quickly, especially if more than one can be taken out in a single blow. There are cooldowns on these skills too which adds a further tactical element to the gameplay.

Paying attention to each arena is just as crucial. They’re not huge, but large enough to run around in while the screen scrolls with you. Spawn points for enemies and traps pop up in various locations, and being aware of where these are helps tremendously. It can take a few attempts to master an arena, so perseverance is important too.

BetaDwarf has added a few extra challenges to each arena in order to tantalise the player with more rewards and potential replayability. Despite having completed an arena, I found myself being drawn back in to see if I could beat the bonus challenge completion time to get the extra reward gem above the little portal door. I’m certainly no completionist when it comes to games but for some odd reason I was suckered in for more.

What clearly makes Forced a little different from a standard ARPG are the game’s puzzles. In one of the earlier challenges you have to guide Balfus through a maze while he carries an explosive. If he touches any walls or enemies then the explosion triggers and you have to go back, get him to pick up the explosive and guide him once again toward the target. With enemies flooding in, a force field wall that only the enemy could pass through and various enemy spawning shrines dotted around, this one took a few attempts.

Forced is really designed as a co-op game for up to four players and you can certainly see the appeal of multiple characters stomping around and trying to work together to fend off enemies, activate triggers or destroy key objectives.

The fact that Forced doesn’t really fall into one particular category of games is what makes it interesting. It’s appeal is down to the combination of tactics, puzzles and fast paced combat. Forced is a few weeks out from release and it’s pretty polished already, so I suggest you take a look at the demo if you like action, puzzles, ARPG style combat, tasty visuals, or even spirit guides.