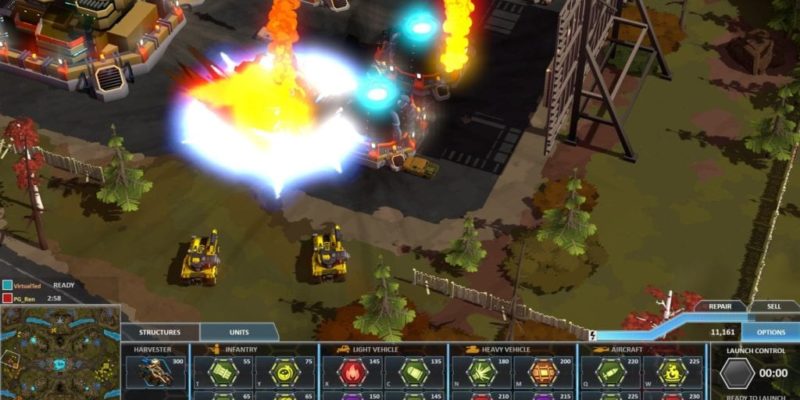 Petroglyph are the RTS guys, in fact, they have a habit of churning out the same formula over and over again with a slightly different take. Grey Goo was a slight exception and was a pretty decent RTS but it never really caught on for any length of time. Most recently Petroglyph has been releasing their 8-Bit series which was a less attractive looking C&C but fun nevertheless. Petroglyph are now working on their next game Forged Battalion after a few failed attempts with games such as Victory and the free to play Battle Battalions.

There’s no doubt there’s a C&C influence, there always is when it comes toPetroglyph and it’s not surprising as the company was founded on the back of the brilliant Westwood Studios (RIP and damn you EA for what you did to C&C). Their C&C heritage is what brings gamers back to their games, but more often than not, RTS fans have been left slightly disappointed. Could this the game to change that?

Once again Petroglyph goes back to the typical base building RTS formula but Forged Battalion comes with a slight twist. This time it’s the game’s units and how players utilise the unit crafting/upgrade system that could help turn the tide of battle.

RTS fans who have played games from the C&C series have an advantage with most Petroglyph games because the hotkeys and controls are always the same. As soon as I fired up Forged Battalion I knew exactly what to do, what to build, and what the likely build order would be to unlock structures and units. It was all so familiar that I didn’t even attempt the training. Some RTS players may be thinking this is the same old stuff we see time and time again from Petroglyph. The answer so far is yes and no. 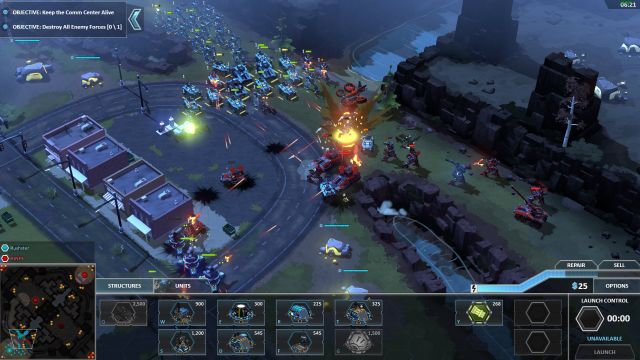 The main “feature” of Forged Battalion is the unit customisation. Players will be able to customise units prior to entering a game. The units are split into infantry, light vehicles, heavy vehicles, and aircraft. The catch is that a player can take a maximum of four units per class into a game so deciding what to create and eventually use could make or break a game.

Units are built using the Faction Creator from the main menu and what can be equipped depends on what upgrades you have applied to the tech trees. There are currently four tiers but that could change based on the Early Access feedback. The more you play the more research points are earned which means juicier weapons. How this will affect matchmaking and balance is still unknown. 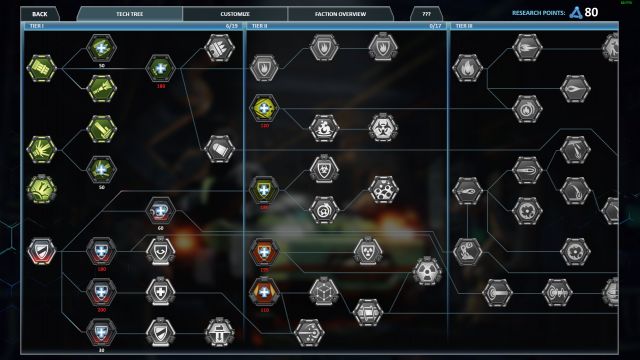 A lovely tech tree to navigate.

Creating a variation on a unit is simple enough, select the type of unit, the armour, and then the weaponry that will be slapped on top. Once created, the new units can be named and added to a  profile for selection prior to entering a game. It’s simple enough to use.

Resource collection is once again handled by trusty harvesters. Remember the good old days of taking out the other player’s harvesters in C&C? That will be a tactic once again and they have no defences. What puzzles me is why after more than 20 years harvester AI is still utter crap. I had the pleasure of watching harvesters wander through attacking enemy units and get completely confused about where to go when resources run out. This needs attention by AI boffins immediately.

Customisation may be the main selling point, but there is a point to the game and there is a story campaign which involves taking on a group called The Collective. The story looks pretty generic with a bad guy trying to control the world, or resources or something. In a game like this, the campaign is not the main attraction, it’s multiplayer which will hopefully give it some longevity. 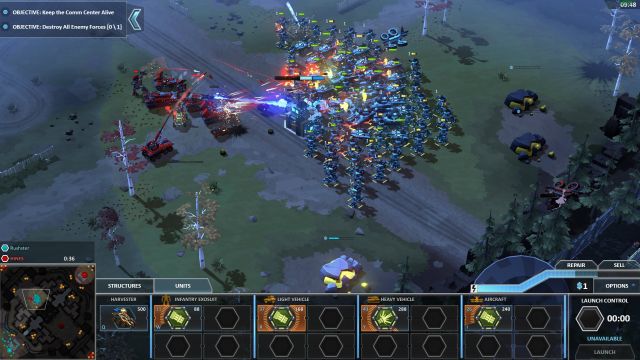 I’ve sunk a reasonable amount of time into this preview version with the missions available and skirmish mode and I’ll admit I’m a bit torn on whether Forged Battalions brings anything new to the table at all. It feels a bit like a reskinned 8-Bit game with visuals that are better but not exactly stellar, some C&C,  and a slice of Warzone 2100 thrown in for good measure. That sounds like an excellent combination of games on paper, but for some reason which I can’t quite pin down, it feels a little unexciting and like you’re going through the same RTS motions that have appeared in every other Petroglyph game. What will make or break this is limiting and selecting unit types for each game. That I can get onboard with.

To sum up, Forged Battalions is about to appear on Early Access and if you are looking for the standard RTS formula with a slight twist then this could be worth a look. Petroglyph is using their tried and tested formula which may get some RTS fans excited but it’s looking a little mediocre at the moment.

Cyberpunk 2077 may be appearing at E3 according to sources