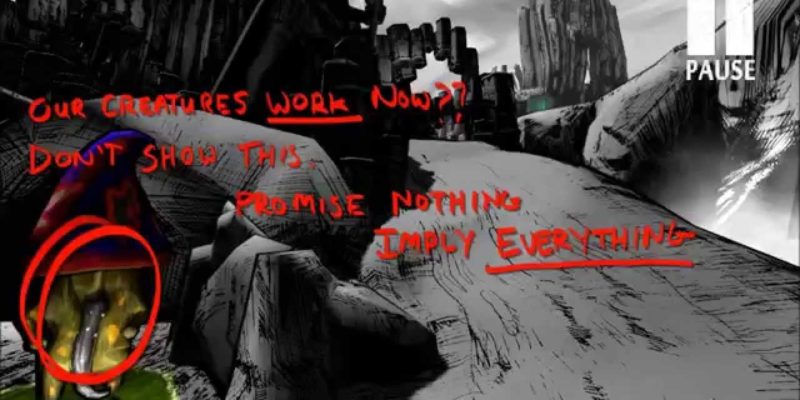 Let’s give the developers a big hand, folks.

I’m not sure whether Question Games is a developer name or a suggestion, but The Magic Circle is intriguing either way. Set inside an unfinished version of a proposed remake of a fictional text adventure game (are you keeping up with this?) it’s perhaps not surprising that former Irrational team members are involved.

Jordan Thomas (known for his work on “Shalebridge Cradle” and BioShock 2) is joined by effects artist Stephen Alexander and the (non-Irrational) Kain Shin, who did AI stuff on Dishonored. They are Question Games.

The first-person world The Magic Circle portrays is a somewhat chaotic one, where unfinished, unused or deleted game “assets” stand colourfully juxtaposed with the black and white realm. A website, set up to read as if The Magic Circle is a real remake of a genuine classic title, takes some terrific jabs at the kind of “everything will be totally amazing and revolutionary!” PR garbage that usually accompanies big game releases. It’s as if the game itself has become sentient and is a bit pissed off at the supposed “creators.”

I’m not entirely clear what you’ll be doing in The Magic Circle’s world, but exploration and open-ended puzzle solving appear to be the broad interactive strokes of this one. You’ll be able to manipulate and prod the NPCs and various bits of code in the world to achieve … whatever your aims turn out to be. I think.