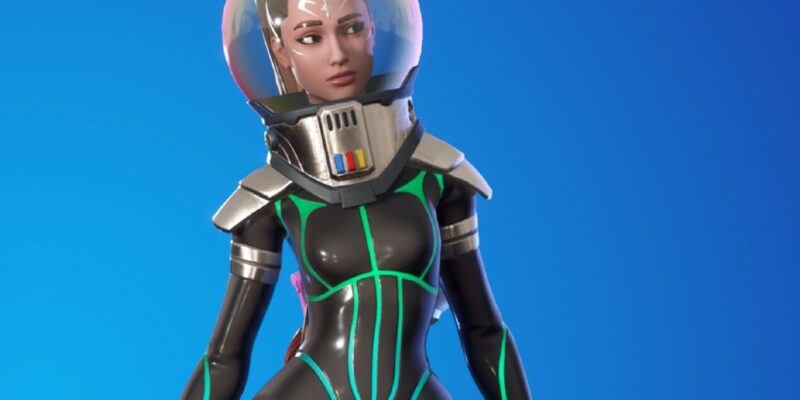 Popstar Ariana Grande first took her talents to the world of Fortnite in Season 7. The Rift Tour was a hit among fans who got to experience the virtual concert. It appears that the Fortnite and Ariana Grande crossover has not stopped there. The singer has returned to Fortnite for Season 8 as an NPC, with some challenges for you to complete. Also, a new Spacefarer Ariana Grande bundle has been added to the Fortnite store. The bundle is filled with cosmetics, including a unique alternate style.

The Spacefarer Ariana Grande skin is ready and waiting in the Fortnite store. Apart from the astronaut skin and the dramatic alternate style, the bundle comes with an I.R.I.S. back bling and I.R.I.S. daydream glider. Also, the Lightscythe pickaxe and its styles will see you stand out from the crowd. Finally, the bundle is rounded out with a Just Keep Breathin’ emote, relating to one of her hit songs.

Other Ariana Grande cosmetics in the Fortnite store

If you want to play as Ariana Grande as a part of this season’s Fornite cube theme, it will cost you 2,500 V-Bucks to purchase the Spacefarer bundle. As always, you can buy some of the cosmetics separately if you prefer. Notably, the original Ariana Grande cosmetics have returned to the store. They first appeared last year, as the Rift Tour made its debut. If you missed out the first time, you now have another chance to get your hands on them. It is likely that the Ariana Grande cosmetics will be extremely popular, so you might find yourself bumping into her multiple times in a match.

Epic Games does not shy away from crossovers. In previous seasons we have seen Superman, Neymar Jr. and Lebron James, showcasing the sheer crossover variety. It’ll be interesting to see who else will be added to Fortnite in future.

She’ll teach you love, patience, and how to take down some Cube Monsters.