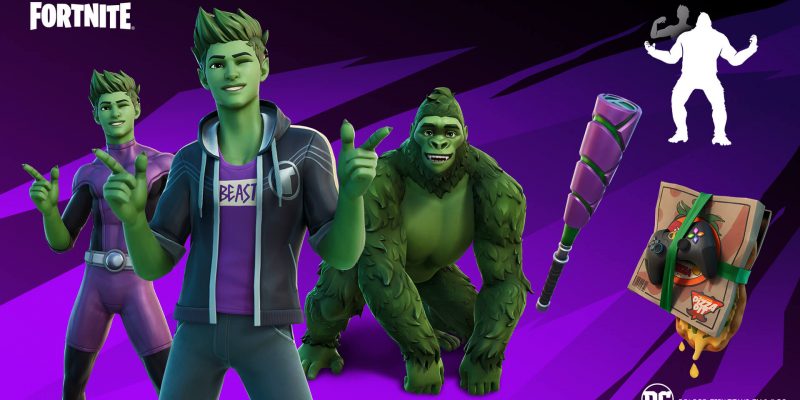 Raven was looking a little lonely in Fortnite, so Epic Games is sending in another DC Comics character: Beast Boy. On Thursday, May 13, the Teen Titan will land in the Item Shop along with some new accessories. Fortnite players will have the chance to nab the Beast Boy items and a few surprises in a brand new Teen Titans-themed Duos competition on May 12.

According to Epic Games, the Beast Boy Outfit will include the character’s uniformed look as well as the casual Garfield Logan Style. Players can even watch Beast Boy go gorilla mode with the “built-in Go Ape Emote.” In addition to the Outfit and Beast Boy’s primate form, the Beast Boy Bundle includes the Couch Titan Back Bling shaped like a dripping pizza box with a gaming controller attached. Plus, there’s a purple and green Beast Bat Pickaxe.

Skilled Fortnite players can unlock the Beast Boy collection a day early by competing in the Teen Titans Cup. Anyone who participates in the tournament will receive an exclusive Beast Boy and Raven Spray, which features the lovebirds taking a selfie inside a heart. Additionally, those who score eight points or above in the competition will also earn the BBRae Loading Screen designed by Gabriel Piccolo. The artwork shows Raven and Beast Boy holding hands on top of a cliff, surrounded by the Fortnite island’s animals. They’re the cutest Teen Titans couple we’ve ever seen.

Shapeshifter and self-proclaimed "cutest" of the Teen Titans, @DCComics Beast Boy is coming to the Island 🦍

Learn about his Set and the Teen Titans Cup where you can earn his Outfit and exclusive Beast Boy & Raven rewards created by @_gabrielpicolo!

There’s never been a better time to bring in Beast Boy, considering Fortnite Season 6’s Primal theme. The Season 5 Zero Crisis finale left players in a primal biome, where they must craft weapons and fend for themselves against dangerous animals and even dinosaurs. Beast Boy may feel right at home with his Gorilla Form, but don’t get too comfortable — the Fortnite animals still won’t be friendly.