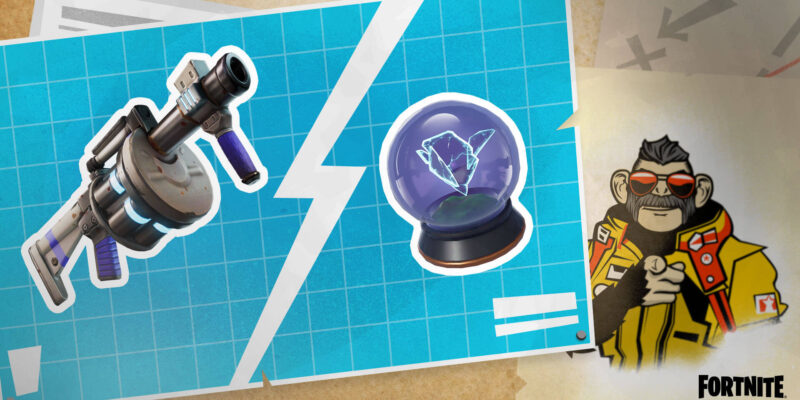 Fortnite Season 8 has seen the return of the cubes, as well as the introduction of some new NPCs and new features. One of these features has been revealed as the ability to vote on things like vaulted weapons. Previously, players used gold bars to vote for a mounted turret location. Millions of bars later, it was decided that the mounted turret would be placed at Boney Burbs. Now, there is another decision for you to vote on using Fortnite donation boards. You can now make a choice on which one of two items you would like to see unvaulted.

A video was shared on the Fortnite Twitter page explaining the addition of donation boards. Ultimately, the donation boards allow you to use your gold bars to vote between two items. The first item to reach 100% funding will be released into the loot pool straight away. Currently, the options are either the Shockwave Launcher or the Rift To Go.

To cast your vote you must begin by loading into a match. Then, you can use your map to search for a dollar sign emblem, which is where the donation boards are located. Once you select which item to vote for, it will cost you 50 gold bars per vote. Also, every time you cast a vote you will receive some small shield potions.

Donation boards are definitely an exciting feature as it allows the fans to have a say on how Season 8 will be play out. At the time of writing, the Shockwave Launcher is in the lead. However, casting your vote at the Fortnite donation boards could switch up the end result. If the item you wanted to see unvaulted doesn’t win, there will be more to vote on in the future.

Welcome to the War Effort, recruit.

JB Chimpanksi has a plan to save the Island, but we’re going to need your help to pull it off.

Find out how you can choose which weapons and items will be unlocked to help fight back The Cubes! pic.twitter.com/Pf4mOEpqQi