Epic really did hit on a winner with Fortnite and the Battle Royale mode as new data released today reveals huge earnings numbers for March.

The report from Superdata states that Fortnite is now the top-grossing console title and fifth highest grossing PC title worldwide in March. It streaked ahead of titles such as World of Warcraft, PUBG, World of Tanks, Far Cry 5 and CS:GO.

Fortnite has now also overtaken PUBG in terms of revenue generated and monthly active users across all platforms. The report also states that it has the highest conversion rate of any free to play PC game last month which means gamers are liking what’s on offer when it comes to the extras being added by Epic.

For overall revenue generated, Epic pulled in a whopping $223 million last month taking into account consoles, mobile, and PC. This number is up 73% up on February.

You have to wonder if the battle royale bubble will burst at some point as gamers look for new experiences and more developers attempt to create new versions. It’s also no surprise they ditched the excellent Paragon but you would think with all that money coming in they could have developed it further or at least kept the damn servers online. It’s all about the money. 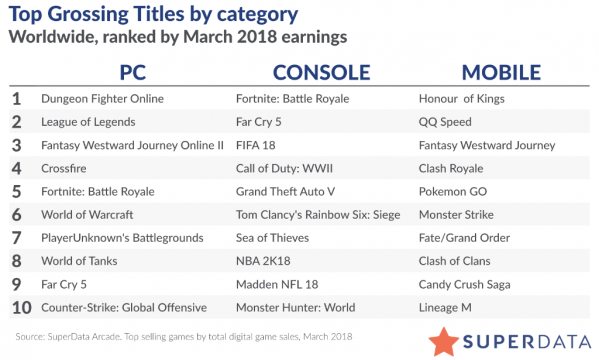