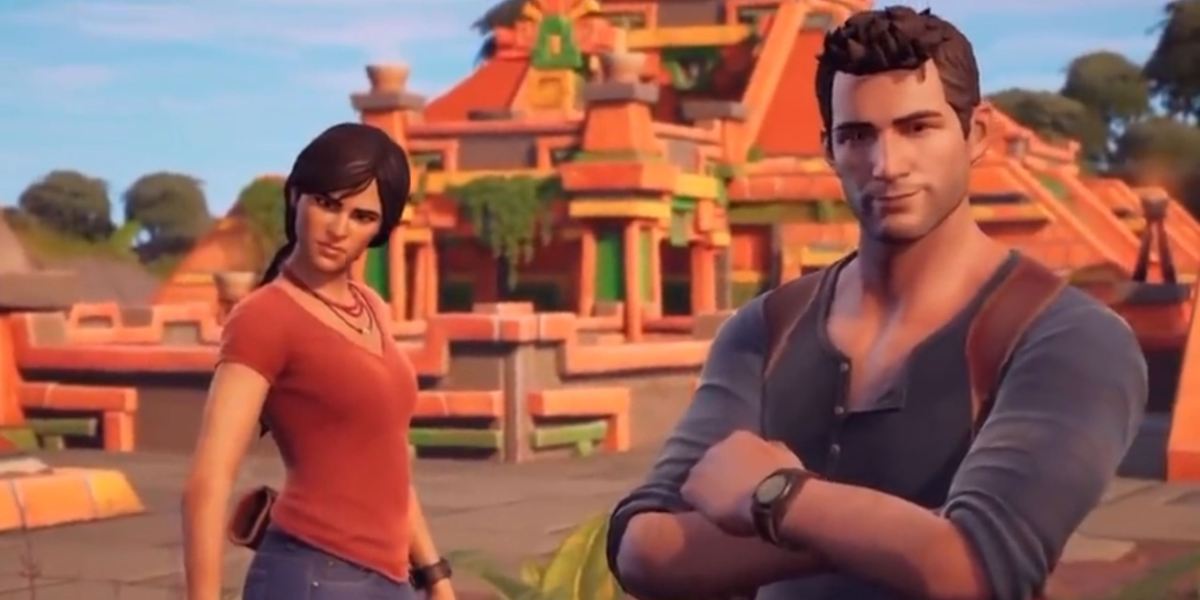 [Update – February 18 @ 12:15 PM ET]: Nathan Drake and Chloe Frazer from Uncharted are now live in Fortnite. Drake comes with one Outfit that can alter between the game and movie adaptation version. Chloe’s Outfit comes with three Styles: default, no jacket, and her look seen in The Lost Legacy. The update comes with Chloe’s Pack Back Bling, a Second Hand Saber Pickaxe, a Parashurama Axe Pickaxe, and an ‘Update Journal’ emote. From now until the end of Chapter 3 Season 1, you can find maps left by Nathan Drake around the island. You can follow the maps for hidden treasure.

The original story, published on February 14, is as follows.

Hot on the heels of Uncharted getting made into a vaguely related movie that no one asked for, series’ characters, including Not Indiana Jones and British Pony-tailed Lady That Isn’t Lara Croft, are coming to the ever-expanding tween kill-fest of Fortnite. Twitter user Z0m6ieLeaks tweeted the trailer out earlier today, so now we have to talk about it, even though I’m assuming no one wants to. According to the tweet, the crossover should go live on February 17 at 7 PM ET, so this is happening very soon. Presumably it’ll tie in with the movie starring Spider-Man and Brags-about-being-able-to-stop-horrible-disasters-man.

The announcement came alongside a trailer which gives us a pretty exact idea of what this crossover entails. Players will be able to get skins that bear the likenesses of Nathan Drake and Chloe Frazer from the Uncharted movie, as well as ones that look like the characters from the games. I wonder which ones people will be more enthused about? The trailer is under 30 seconds long and mostly shows the characters running and shooting at things, which is appropriate considering that’s most of what Fortnite entails. Well, okay, for me, Fortnite mostly entails hiding for most of the match, only for someone to hunt you down and slaughter you towards the end, but, hey!

Nathan Drake is coming to Fortnite this week

In the event you’re not familiar with Uncharted, it’s a popular PlayStation series that puts players in the shoes of Nathan Drake, a guy who looks a lot like Nathan Fillion and also shoots hundreds and hundreds of people to death. He climbs things and looks for treasures too, but it’s mostly shooting, accompanied with a side of snark. While I doubt we’ll get much Nolan North-voiced snark, being murdered by Nathan Drake of Uncharted fame in Fortnite will likely give people a taste of what his endless list of victims felt right before he terminated their lease on life.