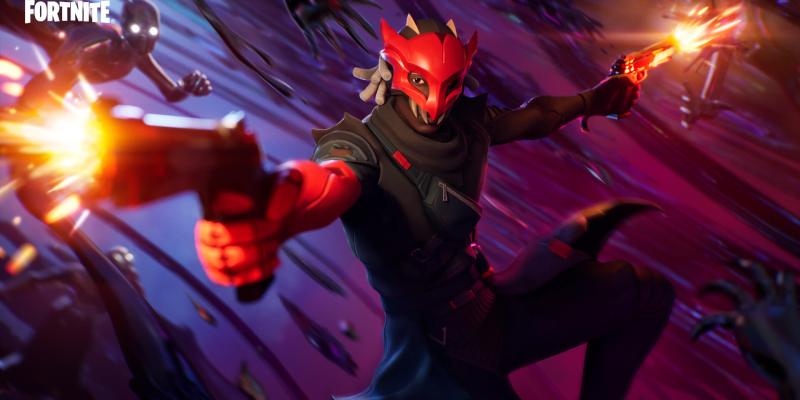 Fortnite Chapter 3 Season 4 has arrived, along with some mysterious Chrome that’s taking over the island. This season, there are new points of interest, new weapons, and you can even pet wolves. As this month is coming to an end, Epic Games has revealed October’s Fortnite Crew Pack. Every month, the Fortnite Crew subscription service brings a new bundle containing an array of goodies. Coming up next month is the Red Claw skin with matching cosmetics.

In October, Fortnite Crew subscribers will get to play as Red Claw, who has been described by Epic Games as “mysterious but also fearless.” You can take to the battlefield with his bright red mask equipped, or you can choose to take it off in your Locker. Along with the skin, you will get the Black Fang Back Bling, Red’s Rippers Pickaxe, and Shredded Red Weapon Wrap. You’ll also receive two lobby tracks named Dark Nights/ Red Lights, as well as an instrumental version of the song. Finally, the Red Claw set is complete with the Never Take Me Alive Loading Screen. There’s plenty included.

As always, Fortnite Crew members will also gain access to the current Chapter 3 Season 4 battle pass. If you purchased the battle pass before subscribing, the 950 V-Bucks you spent on it will be returned to you. On top of that, you’ll recieve 1,000 V-Bucks for every month you remain subscribed.

Don’t miss out on even more cosmetics

If you missed out on the September Crew Pack, don’t worry, you still have until September 30 to get your hands on the Loveless bundle. The featured outfit comes with four masks for you to choose from, a Calling Card Back Bling, a Stylus Edge Pickaxe and Shooting Shuffle Weapon Wrap, and The Loveless Bandit Lobby Track.

That wraps up everything you need to know about the Fortnite Crew Pack for October before it goes live at 8 PM ET on September 30.