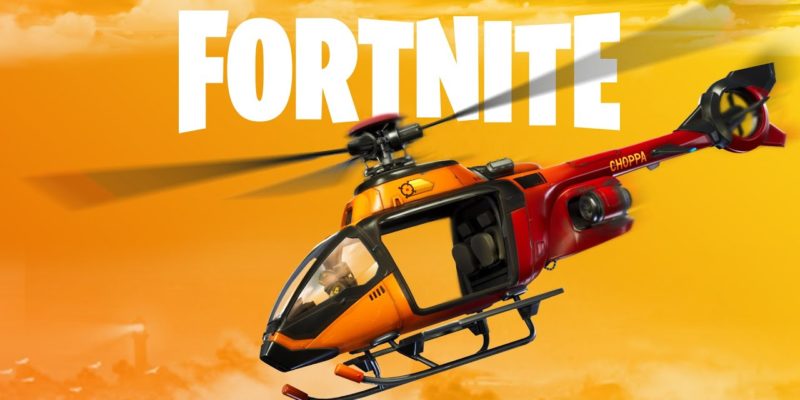 Fortnite‘s latest patch is now live, and it adds a helicopter to the game. Sure, the 12.20 patch also introduces minor weapon balancing, a new limited-time game mode, and some changes in the map. But without a doubt, the Choppa helicopter is the major highlight of this update. After all, it has been over a year since the game added an airborne vehicle.

For those who are fans of destruction, though, you might have to lower your action expectations for the Choppa helicopter. Contrary to the X-4 Stormwing plane, which was Fortnite‘s last airborne vehicle, Choppa has no weapons attached. It’s meant to be used only as transportation. Of course, you and your squad can still use it as a tactical advantage and shoot from above.

Fortnite season 2 is no stranger to the idea of helicopters. Since it began, there have been several helipads hidden in the game’s secret bases. And now, you can find the Choppa in those secret locations.

In addition to the Choppa, those with a Battle Pass can enjoy a new limited-time game mode named Spy Games. If you want to try it out, you can do so from Operation: Dropzone. This mode offers a new system to snag perks and gain an advantage against other players. As well, three new challenges will be added to this mode. The completion of each of these tasks will grant a reward of 80,000 XP.

Also, Pleasant Park's football pitch has been transformed into a helipad: pic.twitter.com/OBFu3tXFsf

As part of the minor changes in the map, Pleasant Park and the Oil Rig have seen some tweaks. The football pitch in Pleasant Park now has a secret helipad beneath it. Also, the Oil Rig has seen better days, as it is now destroyed and in ruins. Lastly, some minor tweaks to weapons were identified by a prominent Fornite leaker, Hypex. According to one of Hypex’s tweets, the C4 explosion has been delayed from 0.3 seconds to 0.5 seconds and the Grappler has gained a short delay.

If you want to take a look at the complete list of fixes included in Fortnite‘s 12.20 patch, you can do so on the game’s community issues board.