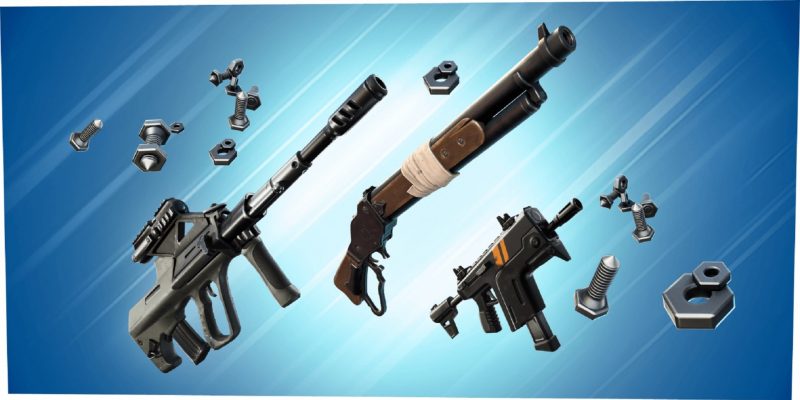 Fortnite Season 7 and the alien invasion is well underway. Already, players are getting sucked into the action by completing weekly challenges, gathering their squad to open cosmic chests, and more. It appears that we won’t have to wait long to find out what else Epic Games has up its sleeve for Season 7. Now, a new leak suggest that two new weapons could be making their way into Fortnite.

The prominent Fortnite leaker,HYPEX, shared images of the rumored new weapons on Twitter, along with information regarding what the weapons do. First up, we have a weapon called the Cowinator, which lifts objects and throws them. Next, the Prop Gun does what it says on the tin and transforms you into a prop. However, the weapon is said to have a cooldown timer and it notifies nearby enemies every 30 seconds. Currently, it is unknown what objects the Cowinator will be able to throw. In addition, the name of the weapon could be hinting that cows will be the next animal to join the game.

Then, in terms of the Prop Gun, props have featured in Fortnite for a while. You can turn into one by spending gold bars at NPCs. The information given about the Prop Gun suggests it could be a portable version of this feature. If the weapon does make a debut in Fortnite, it may prove to be a useful way to trick an enemy.

Would you like to see these leaked extra-terrestrial weapons in Fortnite?

The leaked Fortnite Season 7 weapons are definitely unique. It is highly likely that Epic Games will introduce new content as Fortnite Season 7 progresses. Notably, this can come in the form of new weapons. It will be interesting to see if the leaked Cowinator and Prop Gun arrive in the battle royale and how popular they will be.

2 Of the upcoming Season 7 weapons:

Right: Cowinator (Lifts objects and throws them)
Left: Prop Gun (Transforms you to props with a cooldown and notifies enemies nearby every 30 seconds) pic.twitter.com/TmOodEtuGV