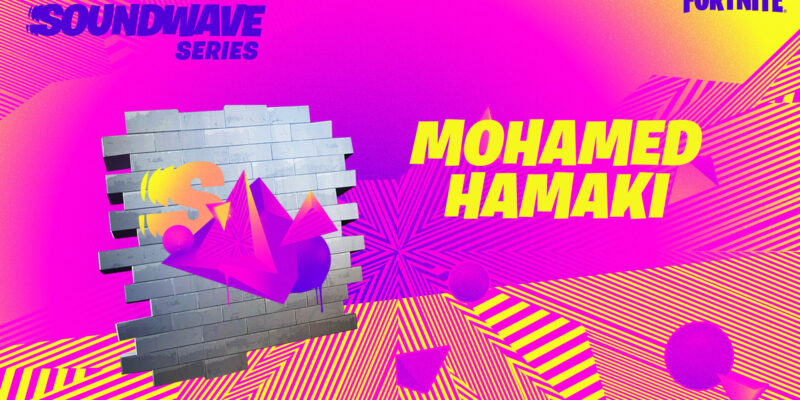 By now, Fortnite fans will be familiar with live events. With the visuals, sound effects and more, live events provide a unique experience for players. In the past, Epic Games has put on the Rift Tour featuring Ariana Grande, film festivals, and more. Whatever the live event holds, they usually end up a hit among players. Now, another series of concerts have been announced and the first one is just around the corner. A Soundwave Series will be introduced into Fortnite, featuring artists from around the world.

The first show will feature Mohamed Hamaki from Egypt. Apart from his most popular hits, the Soundwave Series will debut a performance of his brand new song, Leilt Elmor. In addition, to celebrate his new song, you will be able to purchase the Leilt Elmor emote from the item store.

To join in with the party, all you have to do is load into the Hamaki’s Musical Show playlist. Once the show kicks off on October 1, it will repeat for a total of 48 hours. Therefore, you will have until October 3 at 2 p.m. ET to hop in. Participating in the event will grant you a Soundwave Series Hamaki spray too.

The Fortnite Soundwave Series will feature even more music

Over time, more musical talents will feature in the Fortnite Soundwave Series. According to Epic Games, we should expect to see the Australian singer and songwriter Tones and I, and Brazilian rapper Emicida. Also, there will be pop music from Japanese artist and music producer Gen Hoshino, and French-Malian singer Aya Nakamura.

The Fortnite Soundwave Series should have something for everybody in the music world. It sets out to provide an entertaining event for music fans, potentially leading to new musical discoveries. Make sure to stay tuned to find out the details of future Soundwave Series shows.