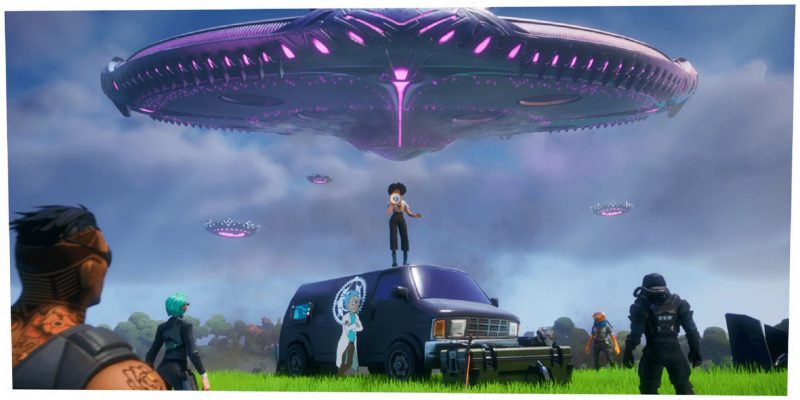 Although Fortnite Season 7 has just begun, players are already looking forward to what else the alien invasion may bring. We have already seen the addition of new weapons, weekly challenges, and new points of interest. However, according to a prominent leaker, Fortnite Season 7 could gain another new location that features a zero gravity biome.

After revealing an item which creates an area with no gravity, the Fortnite leaker HYPEX, revealed a biome on a much larger scale. The leaker suggests that this season could feature a zero gravity biome in the middle of the map because there is a mention of swimming. However, there’s no reason the zero gravity point of interest couldn’t make itself at home at numerous areas containing water.

Along with this information, HYPEX shared some leaked sounds relating to the alleged zero gravity location. The unique sounds are supposedly audio cues for entering and leaving the environment. Also, there is an audio sample for the ambient noise you can hear when inside the biome.

The sounds definitely give off some serious zero gravity vibes from Fortnite Chapter 1 Season 10. If you are not familiar with that season, areas such as Loot Lake featured zero gravity. If you entered one of those areas, it allowed you to jump higher. Introducing a zero gravity point of interest would fit in with the extra-terrestrial theme of Fortnite Season 7.

It will be interesting to see if this leak about a zero gravity location ends up materializing in Fortnite soon. Epic Games has yet to confirm any map changes are on the way. Previous Fortnite seasons have featured major progressive seasonal changes. Therefore, it is possible that Season 7 could follow suit.

A lot has been happening in Fortnite Season 7. If you’re feeling a little lost, be sure to hit up our guides and features hub.