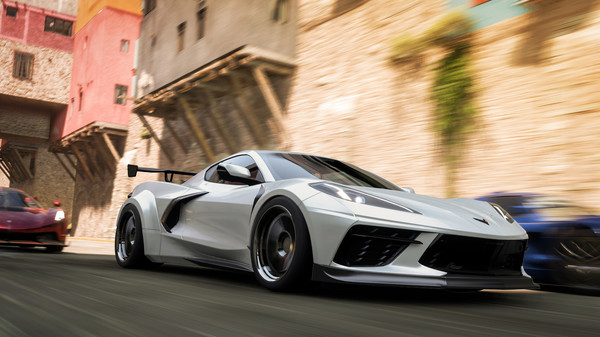 Strap yourselves in, racers. A new and lengthy ‘initial drive’ gameplay trailer for the upcoming racing game, Forza Horizon 5, dropped during gamescom2021’s Xbox stream. Promising a fictional yet “authentic” representation of Mexico, you’ll drive through grand, lavish environments like deserts and jungles, whilst driving even grander vehicles along the way.

Forza Horizon 5 will be set in an open-world environment with a ginormous map. We’ve already seen a full overview of the game’s rendition of Mexico, with a landscape that aspires to cover the scope of the actual country. The open-world in Forza Horizon 5 is 50% larger than Forza Horizon 4, and the game will reportedly have the “longest highway” and largest selection of on-road and off-road sections. There’s plenty of driving to do, and the new trailer showcased some of the new environments we’ll see in the future.

The extravagant trailer opens with a scene straight out of the Fast and Furious flicks. A 2021 Ford Bronco drops out of a plane with a parachute attached and lands next to La Gran Caldera Volcano, one of the game’s many environments. The trailer itself shows off a selection of four different driving locations, each paired with a unique exorbitant vehicle. The trailer highlights the stunning new graphics and many of the previously announced features of the game. The loud engines and striking biomes are shaping up to make a street racer’s dream come true.

Forza Horizon 5 will release on November 9, with a brief early access period available just four days earlier. The game will be available to purchase for $59.99 USD on Steam for the Standard Edition, as well as $79.99 USD and $99.99 USD for the deluxe and premium versions, respectively. Additionally, the game will be a day one Xbox Game Pass release.

You can check out the Forza Horizon 5 gameplay trailer below: