Fox n Forests is a retro-platformer kickstarted in July 2016 and released this year. The premise is rather simple. You play as Rick, a fox looking to get treasure, a magic crossbow, and eventually a meal out of an annoying bird character named Patty. To this end you help her and a magic tree collect bark from the four seasons to help prevent the creation of a fifth season.

The game doesn’t feature much in the way of a compelling story, and the writing tends to be pretty weak with some somewhat annoying references sprinkled throughout. However, with retro-styled platformers like this, the story tends to be perfunctory but is nowhere near a dealbreaker.

The music is enjoyable for the most part, with the soundtrack altering between seasons in pleasing ways. The art style is solid, and you can generally tell what everything is as well as understanding whats happening on screen without much trouble. There are a few out of place looking enemies but it’s not enough to be overly jarring and for the most part, things look cohesive, with each of the seasons on a map being appealing and stylized. If I had one issue, and this may just be me, the game messed with my eyes a bit as I moved along the level. Something in the panning within each scene seemed off.

Gameplay is a standard affair. A double jump, slash attack, which can be done while crouching, and a variety of arrow types with new attacks and that unlocks as you go. This also includes unlocking new areas of levels.  However, I found the combat and movement to be lacking. There is no ability to shoot while moving and you also can’t fire while crouched. This leads to certain enemies an advantage on you, attacking you while you’re trying to position yourself to hit them or move along the level. It also makes Rick feel stiff and not very enjoyable to control when more is demanded other than simple platforming.

Although to be fair, the moves you get for beating each boss do help increase your variety of attacks, and you can get potions to help you through levels.

The checkpoints are also generally well spaced out though I’m not sure that having to pay for them does much for the game. There are also a few levels that mix up the traditional gameplay via flying, sidescrolling sections that are enjoyable for the most part. The season’s mechanics, in general, are well done, with puzzles being solved by changing seasons to freeze certain waterways or stop a windmill from turning. These are simple, yet clever designs.

Levels are mostly seen as fine but do lack in terms of detail and depth. I did find them to become redundant during repeat playthroughs. To get to each new area you have to collect a prerequisite amount of seeds, some of which are hidden behind targets that only can be hit by certain arrows or unlocked by beating bosses. The new areas can lead to new seeds or other items for upgrades. They can also lead to nothing but a shortcut or chest with little treasure inside. This creates some frustrating moments as you go to repeat a level, sometimes several times, with little reward.

Ultimately, if the game’s art style looks appealing to you, and you’re itching for a solid platformer, then it’ll probably be worth checking out. For myself, I didn’t overly enjoy my time with Fox n Forests and I don’t see myself coming back to it.

I could forgive the story and writing, but the gameplay just wasn’t engaging or enjoyable enough to draw me back in. The lack of a compelling story simply left more to be desired. Repeating a level several times becomes tiresome, sometimes delivering minuscule rewards.

Fox n Forests is not a bad game by any means. But, it’s a game whose flaws drag it down, creating something entirely pedestrian.

We’re on the move – Site update

By Steven Wong2 days ago
Hardware 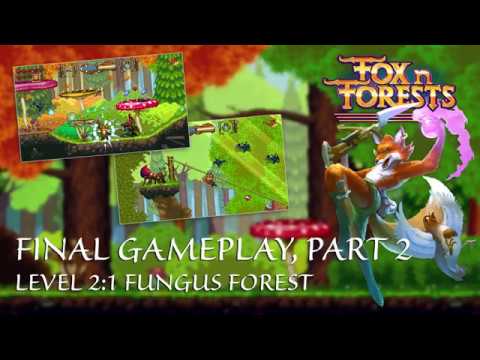