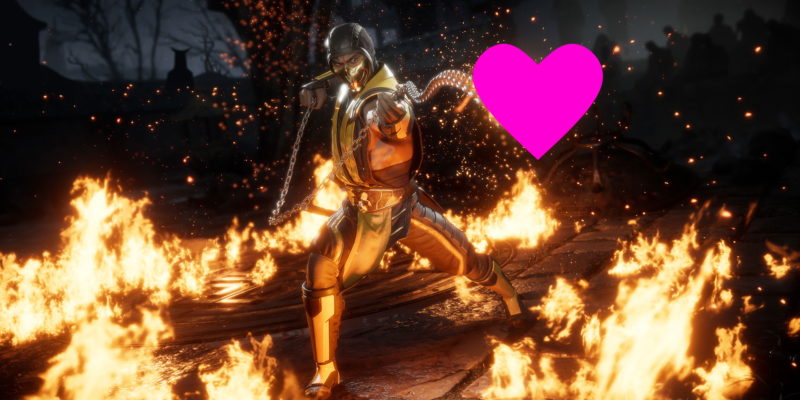 Mortal Kombat 11 is probably the last place you would expect to see Valentine’s celebrations. But I guess blood is the same color of red as all those hearts you see during the month of love. Whatever the reasoning, Netherealm and WB Games have announced that the brutal fighter will show its softer side with the Be Mine Tower event, which runs from February 13 – 17.

There’s more to the Mortal Kombat 11 free Valentine’s event than just some skins with hearts on them. The event is free and open to all current owners/players of Mortal Kombat 11. The tower itself will feature modifiers reflective of the fighters’ fiery love for you, contender. For example, there are a number of “Falling Hearts and Roses” that will greet you along your journey. Others include “Mileena’s Teddy Bear” and “Cupid’s Arrows.” And of course, in the truest of true Mortal Kombat fashion, there will also be Kandy Hearts.

Be mine… FOREVER! The Valentine’s Day Tower is now live, featuring NEW Brutalities for Kano, Jax and Kitana! #MK11 pic.twitter.com/00z4w2mL9w

Of course, for the characters specifically, unlockable skins will also be apart of the mix. Longtime cast members Jax, Kano, and Kitana will all have unlockable Brutalities and skins as part of the Be Mine Tower event.

And it looks like there’s more to come outside the season of love. The official eighth season of Mortal Kombat 11‘s Kombat League will ramp up as soon as the timed event closes. It starts on February 18, inviting all owners of the game to jump in and participate. This will kick off the Season of Naknadan Greed, a free update that’s available until March 17.

Mortal Kombat 11 is currently available on PC via Steam. Since launch, new characters have been steadily added to the roster, the latest being The Joker. After him, the comic book hero Spawn will join on March 17. The Valentine’s event, though, is free of charge for anyone who wants to show their love in the bloodiest way possible.

Half-Life: Alyx will release on March 23

By Steven Wong5 mins ago
News