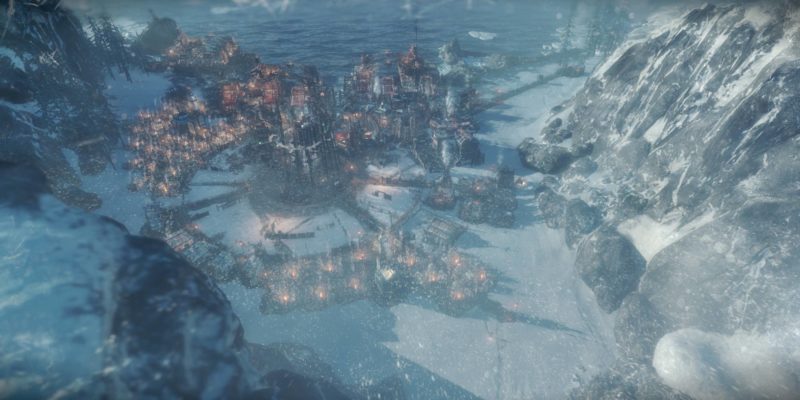 The original Frostpunk campaign was set in a world post-frozen cataclysm. Your goal as the leader of New London was to scrape out an existence in a cold, uncaring world, managing crucial resources to make sure as many people as possible survive. Sometimes you made tough decisions that hurt the few for the sake of the many, without going so far that the populace living in this delicate ecosystem lost hope for their future. It’s a morality and survival simulator in the guise of a city-builder. I love Frostpunk. But The Last Autumn — not so much. 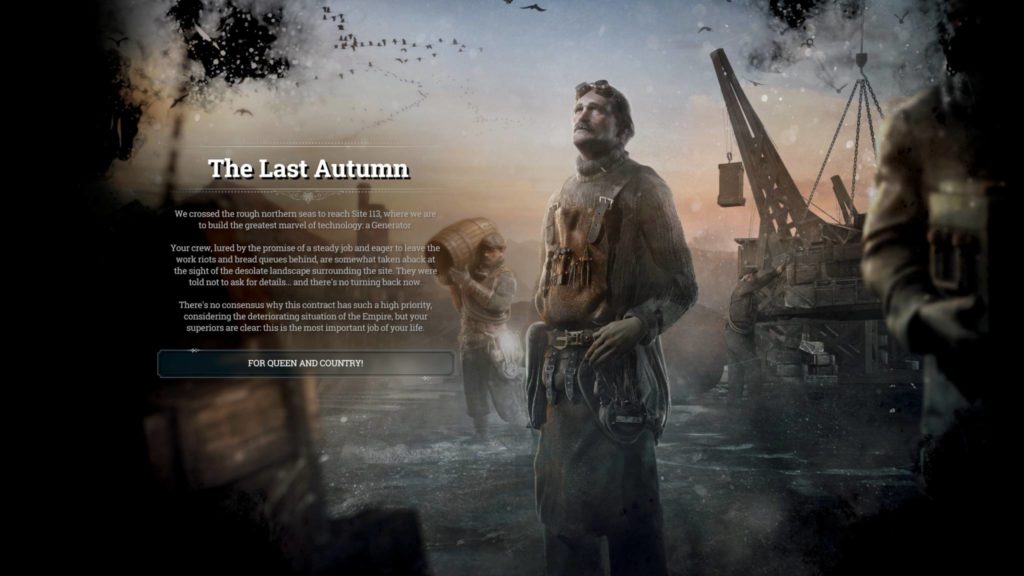 Frostpunk: The Last Autumn is the origin story that every Hollywood movie franchise loves to shoehorn into its story. “How did we get here?” and “How did the MacGuffin at the center of these frozen towns get made?” It turns out that before the world of Frostpunk got inhospitably cold, it was inhospitable and temperate and the generators were built by workers and engineers. Glad we solved that mystery.

All bitter jokes aside, The Last Autumn tweaks the general gameplay flow of Frostpunk without changing the core focus. Gone are the days of surviving in sub-zero temperatures (at least for most of the campaign). Instead, your goal is to overcome the herculean feat of building the central generators that will allow the cities of the future to survive the oncoming storm. Around that concept is the same city-builder, just with a few new buildings. Not that this is a problem. I wouldn’t expect an expansion to radically rework the core gameplay. But the execution here is sloppy and the whole thing feels superfluous.

Sadly, Frostpunk’s biggest flaw continues into this expansion: the game’s bullshit factor. There is practically no way to do well on your first playthrough.

This is how it’ll happen

In one instance while building the base structure for what would eventually become the town’s central generator, I was told that an accident had occurred trapping several workers under rubble. My options were few. I could blast open the tunnel, freeing the workers but losing an astounding 40% of my progress. Or I could resign the trapped workers to their fate at the cost of generating a large amount of unrest.

Alternatively, if I had built up the construction site’s safety level, a brand new mechanic to this campaign, I could have sent in a rescue team. Alas, without the foresight of what a proper build priority is for this new scenario, I was left with only the two choices. I chose to save the workers and set my progress back. Unfortunately, what I wasn’t told is that saving the workers also generates significant unrest. SMDH. 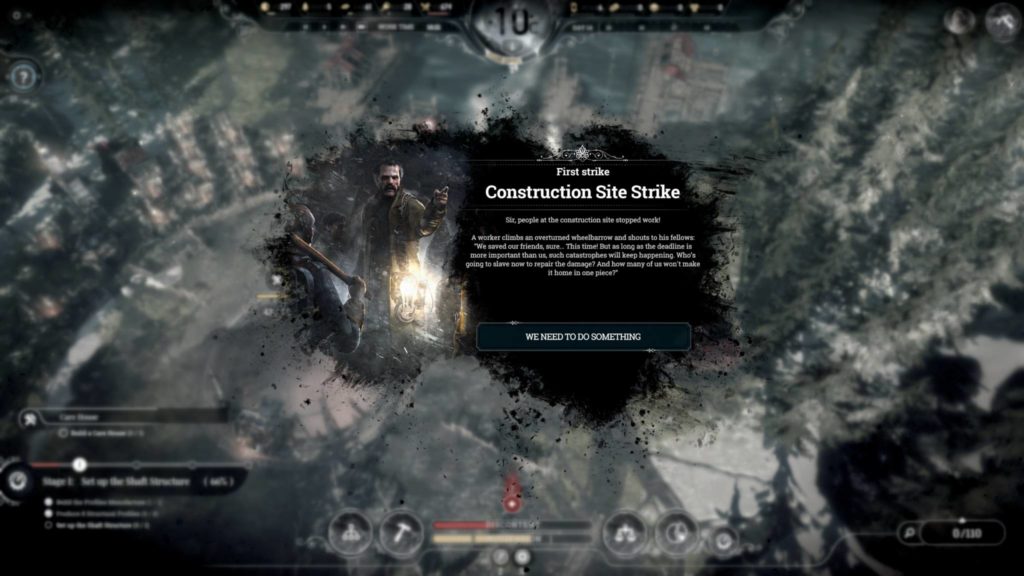 The illusion of choice

However, after a second playthrough, it became clear this campaign is not dynamic. Every major event is scripted to happen at a certain time and there is nothing you can do to change that. Why even try then? If the cave-in happens at the same time every time you play, then why would you ever waste time researching safety measures ahead of that even if you could? There is no way to prevent it, and no other disasters, or even any real unrest, will happen before it, so you might as well maximize the amount of work your people can get done ahead of it. There are plenty of other examples throughout the campaign that fall into this same trap. You will always have the same amount of time to complete milestones. You can practically set your watch to each story event.

In the base game, the set timeline made sense. The world just got progressively colder as you got further into winter. Meanwhile, these scripted events are explicitly there just to fuck you over. It deflates tension if you know exactly what obstacles you’re going to face and when they will occur. 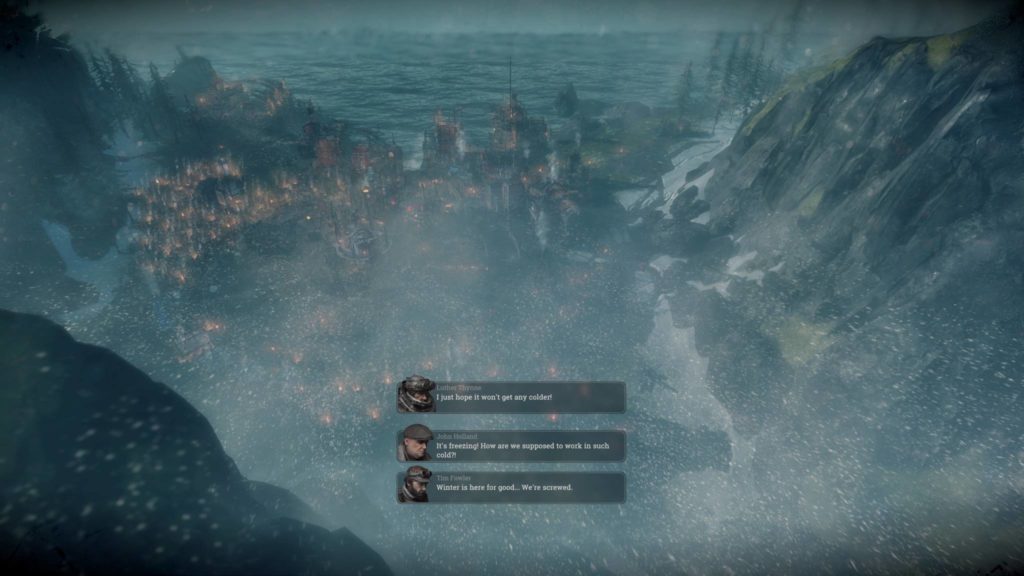 Their way or the highway

The original campaigns were not so heavy-handed with forcing a scenario. It became about how well you can prepare in the face of a new ice age. You needed to make sure everyone had a home to weather the storm and to stockpile enough food and coal to fuel your people and heaters when leaving those homes became impossible due to the freezing conditions. By contrast, The Last Autumn‘s rigid goals of building out each piece of your town’s generator leave little creativity in how you approach the situation.

I guess this is karmic punishment for my saying that the original campaign in Frostpunk was too easy. It may seem contradictory to be criticizing The Last Autumn for being harder, but this comes down to a subtle distinction. The Last Autumn is not challenging. It is difficult.

In a challenging game, you’re presented with a series of obstacles. The only barrier to overcoming those obstacles is your ability to execute the skills the game demands of you. The Last Autumn, however, brings its difficulty out through a rigid story littered with scripted events and arbitrary limits. Passing new laws and edicts generates a cooldown timer, as though the person in charge of a life-or-death survival project couldn’t simply state that a bathhouse and church are allowed at the same time without waiting a day or two in-between. It’s a silly restriction in place simply because this is a video game. It is frustrating because it doesn’t make sense even with the in-world logic. 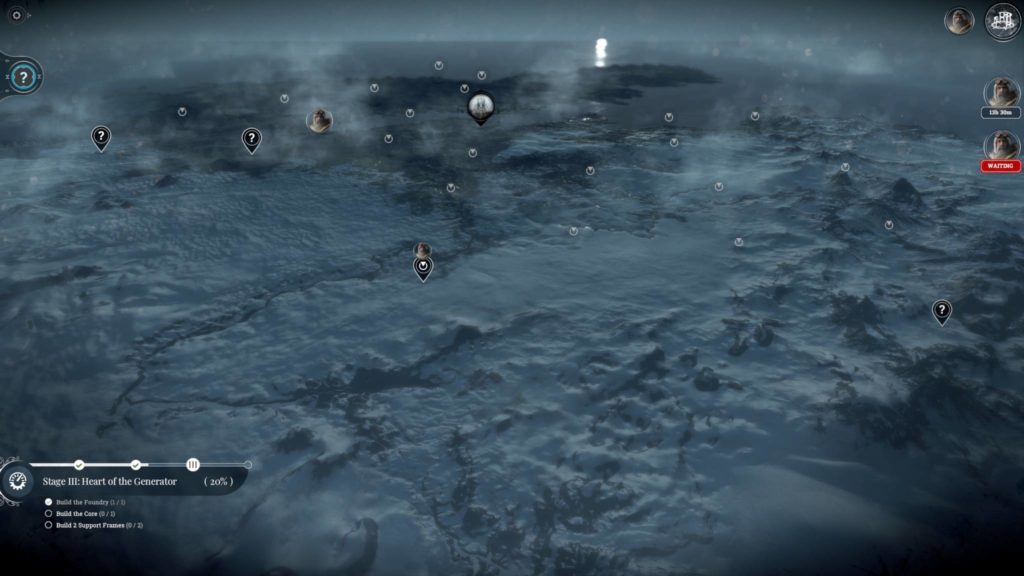 Food and other resources can be scouted around the map.

I understand that a large degree of what this game is trading on is an oppressive, desperate atmosphere. “Tough calls must be made,” says Frostpunk, while completely ignoring easier solutions to problems. It ends up being a forced narrative. And as a result, I lost interest each time an unavoidable disaster happened.

Incidentally, the forced scripted obstacles are the only difficulty I faced. Food is plentiful via your hunting party and the new fishing dock. Resources are readily available via the new docks building that brings in piles of wood, coal, or steel at your discretion. And even workers, engineers, and the valuable steam core can be requisitioned with a currency that passively increases over time. Unlike in the original campaigns, there isn’t a shortage of practically anything for the majority of this story. 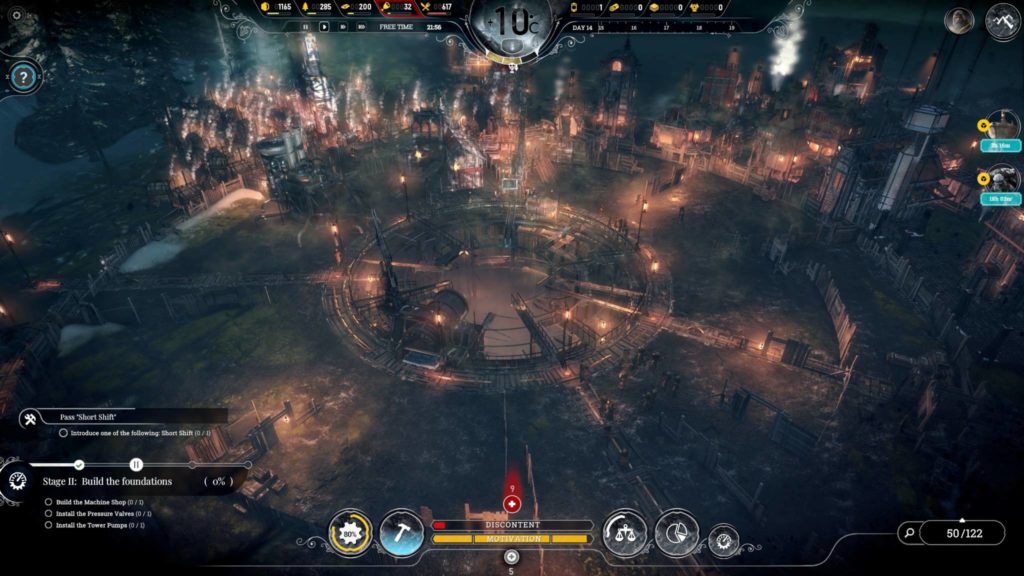 I’m not saying that needing a ton of people for the generator project is unrealistic or unfair. It’s not. But when the only way this campaign can up its difficulty is by forcing you to redo large portions of things you’ve already accomplished and making workers the limiting factor, it becomes tedious. The focus changes from worrying if you have enough supplies to minimize the deaths of your people to worrying about the next time your workers will go on strike from building literally their only hope of survival.

The Autumn of my discontent

The Last Autumn lacks a deeper level of involvement. Instead, it becomes a management sim of dealing with perpetually unhappy employees, arbitrary timetables, and constant, unavoidable setbacks. One loading screen clarifies that the automatons, giant mechanical workers from the original campaign, were deemed “too dangerous to work on the generator when millions of people are desperate for a job of any kind.” Well, they don’t seem that desperate with all the complaining and striking they do. I get that the work is dangerous and the hours are long, but the world is on the brink of collapse. What did they expect?

I really did enjoy the original Frostpunk campaign, even with its being a touch too easy once you learned the proper build order. It had a fresh aesthetic with its frozen apocalypse. The entire game oozed a quiet, tired dread. Frostpunk: The Last Autumn is also, to its credit, an interesting place to set an expansion. However, too little is done with the setting. The fact that events unfold in the same order each playthrough leaves little reason to play through more than once. Even resources are tuned for you to build up your town in a very specific order. It’s ironic that the hardest campaign in the game decided that it wants to hold your hand the whole time.

My run-through of The Last Autumn took a little under three hours to complete, which is itself a little under a third of the time it takes to beat the original campaign. However, the cost of entry to Frostpunk: The Last Autumn is almost half that of the base game, $17. If you’ve been clamoring for more Frostpunk, then the new setting and tweaks to the formula may be enough to justify the slog, but everyone else can just play the base game.

Frostpunk: The Last Autumn has a promising concept and setting, but it fails to do enough differently to justify the toil. If these are the people you're trying to save, you might as well let the world freeze over.