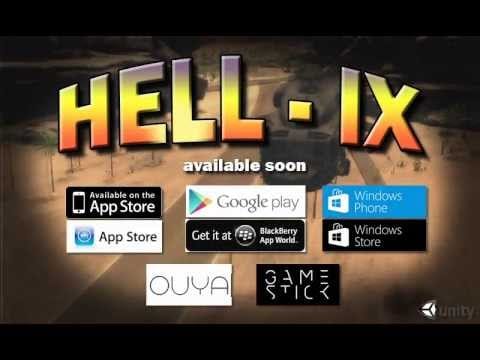 Retromade Games have sent up a Kickstarter flare, and are hoping for you to swoop in on your helicopters and airlift them some money.

To put it in less ridiculous terms, Retromade Games have opened up a Kickstarter for their helicopter combat/rescue game Hell-IX (That’s “Hell Nine” – it’s a Roman numeral). Inspired by Air Rescue, Tiger Heli and – most promisingly – Desert Strike, Retromade are after $22,000 USD to bring the game to PC. And iOS, Android, OUYA, GameStick, Blackberry Z10, Windows Phone, Mac, Linux, and Wii U, obviously.

It does look very Desert Strike. You have to keep an eye on your fuel, ammo, and armour, while flitting around the map like a heavily-armed bumblebee, blowing up targets and rescuing stranded marines. It’s all very arcade-y, too; the controls are apparently “one joystick and three buttons”. So hey, it’s a solid concept that certainly worked in the past.

I’m not entirely convinced – anything action-y being developed simultaneously for phones and PC makes me worry – but Hell-IX has certainly got potential, and it’s presumably pretty far along since the due date is November 2013. You can check out Hell-IX‘s Kickstarter over here or take a look at the trailer below.

Just try not to make fun of it for promising “several hostile enemies.”

Reams of trouble: Realms of Arkania reportedly launches in a broken state