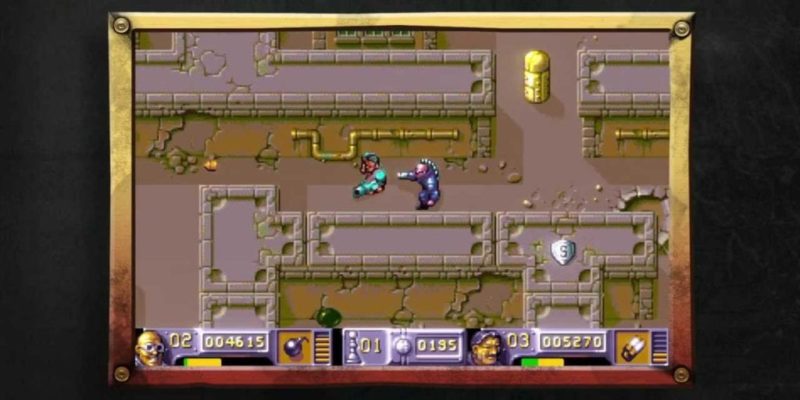 This right here is the best character.

A collaboration between Mastertronic, Abstraction Games (responsible for the PS3/Vita versions of Hotline Miami) and Mike Montgomery from The Bitmap Brothers (a name all Amiga owners should know well) will be bringing a ‘restoration’ of The Chaos Engine to PC on 29 August. It’ll be available through GOG, Steam and Get Games and will cost $10.00 USD (or a bit less if those sites all do a limited 10% off promo like they often do.)

Why restoration rather than remake? Mastertronic’s Stuart Morton has this to say on that very subject:

The Chaos Engine holds very fond memories for so many people and so many great games have been ruined by bad remakes. We didn’t want to remake it. It is a great game and we found very quickly when we went back and played the original that the gameplay still holds up very well.

The release will have both ‘Enhanced’ and ‘Classic’ modes available, with the latter sounding as close as possible to a one-to-one version of the original. ‘Enhanced’ won’t be a great deal different, though it does seem as if you’ll be able to get full 360 degree aiming now (rather than the 8-way shooting from the original) as well as some sharpened graphics and Steam achievements.

And this would be what ‘Enhanced’ looks like. Spot the difference?

Multiplayer is included in both local and online forms, so you’ll now be able to swear at random internet strangers when they refuse to pay to revive your character.

Here’s a question though: will the US version still have the perverted priest altered to “scientist”?

If you’re not sure what The Chaos Engine is, or just want to see what this re-released version will look like? Here’s a hands-on video from Mastertronic showing off bits of the first three worlds.

Retro formula: F1 2013 to come in regular and (even more) classic editions