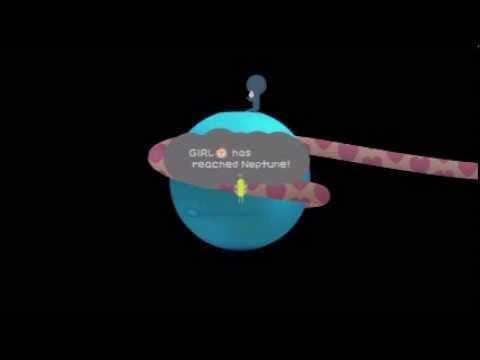 More than five years after the space trek of Noby Noby Girl started, she has finally reached Neptune. This happened last March, but finally there is footage of this momentuous occasion, that we are sharing here for you today.

Some of you may not remember what this is about, so, as a quick refresher:

Now, data on the amount of stretching all Noby Noby Boy characters did were collected online and visualized via a separate character, GIRL, who stretched the same length to reach the different planets, starting from Earth. Factoring into this were some Lucky Weeks, were the lengths of some players were multiplied before being added in.

Since the game’s release in February 2009, GIRL reached the moon ins just four days, Mars three months after that (May), and then Jupiter in November of that same year.

GIRL then reached Saturn in January 2011, Uranus in December of that year, and now, Neptune, last March 2014. KillScreenDaily humorously notes that at five years, GIRL reached Neptune fasted than the Voyager 2 by 4.4 times.

And now, finally, you can watch that momentous occasion below: