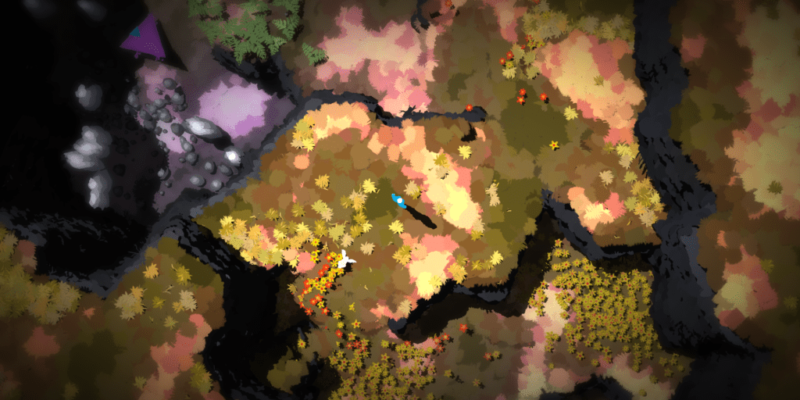 Future Unfolding is a game you should play with as little prior knowledge as possible. I realise I risk pushing you away from this review by writing that, but hopefully I can explain and enthuse about the game without getting too specific. The discoveries in this title are much better left to the player than to some guy pontificating about them in an online article.

It’s a game about exploration. True exploration; in the physical sense of moving around a rendered landscape, and the mental exercise of figuring out the rules of that same world. Future Unfolding is the antithesis of the quest arrow, the bread-crumb trail, and the floating objective marker. The game opens with your character appearing on the forest floor, and leaves the rest to fate.

Throughout 10-12 hours of play, the only tutorials you’ll see are a pair of brief prompts suggesting that you might like to try pressing this particular key or button (depending on your control scheme of choice). Those two abilities, a short dash accompanied by a streak of blue and a general purpose ‘do an action’ command, can overcome every possible obstacle. 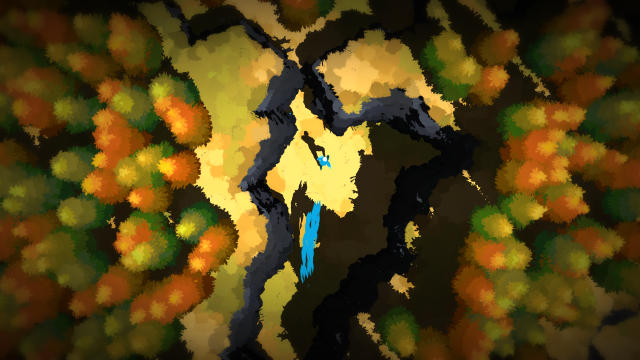 That’d be the dash, there.

Even that minor concession to guidance feels like an act of minor sacrilege, given how committed the rest of the game is to stepping back and allowing players to reach their own small epiphanies.

In that respect, Future Unfolding reminds me of another outstanding game which resisted any tutorialising of its exploration and puzzles: Two Tribes’ Toki Tori 2. Though very different in their presentation, the two games share a philosophy of player progression through experimentation, and an emphasis on environmental manipulation.

Each of Future Unfolding’s multiple worlds are constructed from numerous individual areas ‘chained’ together (they appear almost tethered on the game’s map screen). There’s a degree of procedural generation involved, though it seems to be the kind that rearranges hand-designed scenes in different orders, or has an overall space in mind but picks from a bucket of various pre-selected objects to fill in the details.

Thanks to the game’s environmental staples being dense forests and winding canyons, constructs which already reject any sense of human design, the combination of hand-crafting and algorithmic randomisation results in an authentic array of topography.

It may or may not also generate mysterious purple pyramids.

Progress, within the outer limits of each area, is pretty freeform. Several directions tend to be open for exploration at any given time, and routes that are ostensibly blocked off will often be accessible with a spot of puzzle-solving. Said puzzles are quite organic, relying more on the player’s grasp on the world and its logic than, say, pushing objects around or solving some kind of numerical riddle.

The earliest hours are likely to be spent testing out your pair of action buttons on anything and everything you come across, then saying “… what?” as you accidentally make a rabbit give birth to a shrub. Future Unfolding’s willingness to just toss that strangeness at players and trust they’ll accept what’s happening until they experience broader context is another example of the game’s confidence in its own vision and mechanics.

It’s a wonderfully paced title, deploying its environmental challenges and roadblocks in such a way that the player learns a new trick (or new twist to a known mechanic) at a steady rate. There are always multiple ways to solve encounters; some elegant, others involving more brute force or sacrifice. ‘Completing’ a world without finding all of its clues or mechanical secrets is not only possible, I suspect it’s likely to be the default case for most. There are several varieties of animal in the game and, despite having finished it, I’m still not entirely sure how the birds ‘work’. 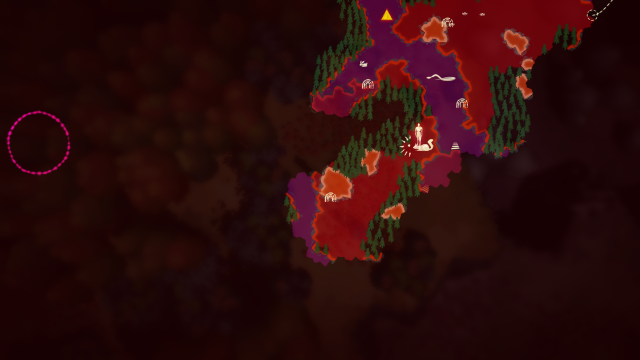 These symbols all mean things, but I’m absolutely not telling you what.

Animal aid is a significant part of Future Unfolding, both in the form of those which roam about on the landscape, and larger, often hidden, ones who will offer short dialogue. This is either vague information about the world and its laws, or some Confucian-style wisdom. Sometimes they’re one and the same.

While by no means off-putting, the appearance of enigmatic text does feel like a weaker aspect of the game. The little lines of philosophy are fine, but at times seem a touch on the nose in a title where mechanics and landscape are so deftly combined without the use of a single word. At their best though, they do embellish or confirm aspects of the world about which the player has already theorised.

They also fit into the overall meditative tone of the game. Future Unfolding is, aside from a few moments of danger (death is only ever a minor setback), an extremely relaxing title. The bird cries can be a bit piercing, but the rest of the audio and score mesh together into a sort of perpetual evocation of wilderness and natural beauty. It’s the sort of score which could very easily wind up on the Leaf Label or the same bill as July Skies. 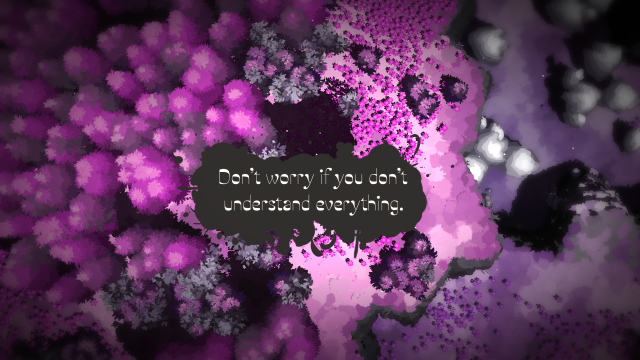 Words to live by.

Thoughtful, bold (in colour and execution), and with absolute faith in its players to handle being cast into the glorious unknown, Future Unfolding is a rare delight. If these words inspired any desire to play it whatsoever, then do so; before you learn too much else about it.