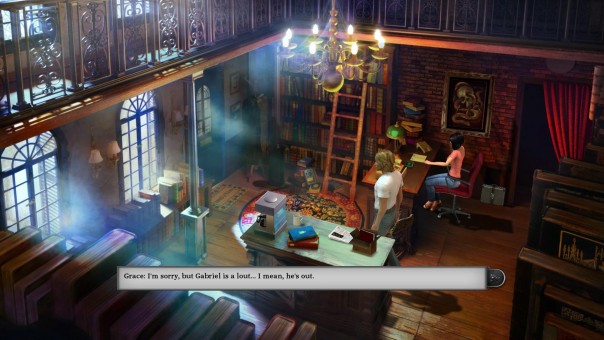 Gabriel Knight: Sins of the Fathers – 20th Anniversary Edition (or “the Gabriel Knight remake”) is now available for purchase.

As my short-form nickname implies, the Gabriel Knight remake is a remake of Gabriel Knight: Sins of the Fathers, one of the best point-and-click adventures of the 90s – and that’s saying something, considering that was the genre’s golden age. The supernatural mystery puts you in the leather coat of failing author, failing bookstore owner, and generally successful womaniser Gabriel Knight, who is currently suffering a terrible series of nightmares. Things are looking up, though, because a recent spate of voodoo-themed murders might be enough to kill his writer’s block! Assuming his investigation doesn’t get him killed first.

The original version was dark, brooding, well-written, and full of actually logical puzzles. The remake is… well, it’s a remake. It is the same game, only with updated graphics, a new voice cast, a few little changes as to when you need to solve certain puzzles, one significant puzzle change, and a few extra little problems thrown in for good measure.

I honestly have little hesitation in recommending you pick it up, but that’s from the perspective of someone who has a great love for the original game. Peter Parrish – who has never touched a Gabriel Knight game before – is currently playing through the remake; when he’s finished, we’ll be writing up a joint review. With something like this we figured it’d be nice to have a perspective from both someone who adores the original and someone who’s new to the series. Until then, you can either have a listen to our lengthy discussion of the game on our latest podcast, or have a gander at an interview I did with series creator Jane Jensen a few weeks back.

You can pick the Gabriel Knight remake up on Steam, GOG, or the Phoenix Online Store. It’ll likely cost you around £12.99.