It occurred to me, a little too late, that I am a terrible choice of person to preview the remake of Gabriel Knight: Sins of the Fathers. See, I love the original, which you’d think would be a good thing. I played it when I was about 10 and, other than giving me an (eventually unhealthy) interest in both the occult and the works of Dennis Wheatley, it gave me all sorts of horrific nightmares. It was amazing. 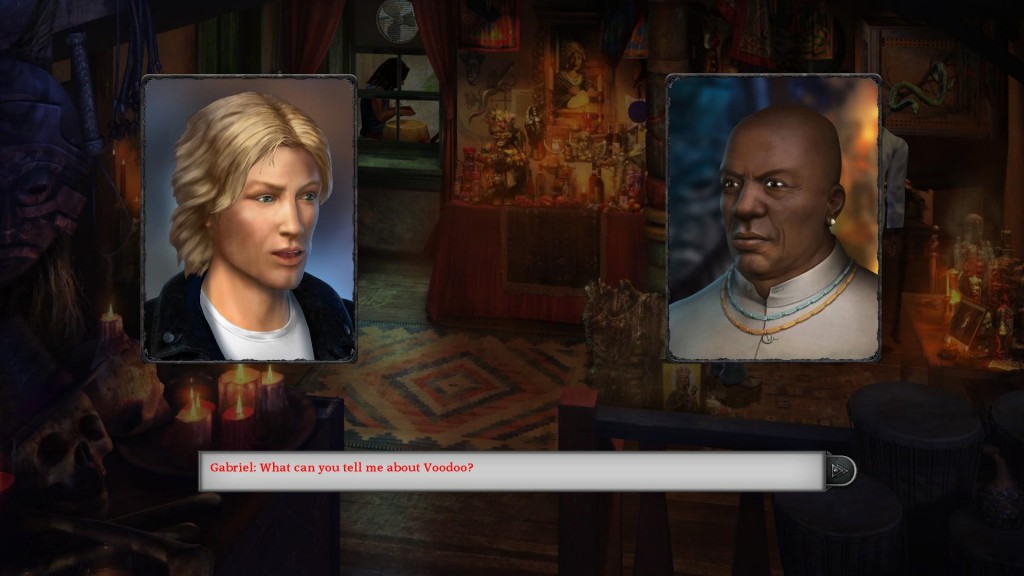 If you know anything about Gabriel Knight, you likely know this line.

It’s the tale of flirtatious, womanising bookstore owner-cum-failed author Gabriel Knight. Writer’s block is destroying his hopes of writing a new thriller, but good news! He’s having terrifying nightmares and New Orleans is suffering a series of Voodoo-related murders. Perfect for killing writer’s block – assuming his writer’s block doesn’t get him killed first.

Naturally, then, you’d think I’d be the perfect person to look at the remake. I know Gabriel Knight rather well, and I’m clearly emotionally invested in getting a good, authentic remake. The problem is that I perhaps know Gabriel Knight a little too well.

The preview build I played includes the game’s first two days, which offer a good opportunity to see a fair few of the game’s primary locations, wander around and do a little investigating, and generally soak up the game’s New Orleans feel. The first day mostly revolves around Gabriel trying to locate and visit the latest Voodoo murder crime scene so that he can do a little investigating on his own; things build up from there as he starts to find clues the police apparently missed, uncover a little more than the culprits seem happy with him knowing, and – most dangerously of all – discover that maybe, just maybe, there is genuine supernatural power behind Voodoo.

As mentioned in the preview, it’s a little easier to find the necessary clues at this murder scene.

And God, but it’s a joy to be back in this world. A lot of stuff is just how I remember it. There are the daily horoscopes in the newspaper that hint at what the day will involve, and which eventually – and hilariously – become incredibly specific to Gabriel’s plight. There’s the unique bit of music for each location. There’s the lengthy and educational chat with Dr. John about the differences between Voodoo and Hoodoo and Vodun. There’s the rich, dark atmosphere, which is always threatening but always buoyed by a cynical sense of humour.

So here’s what I can say, based on the first two days: yes, this is Gabriel Knight. It looks nicer and there are some tweaks, but it’s still very much the same game.

Some of those tweaks are extraordinarily welcome. Without wishing to spoil much, one of the clues you need to find early on is a snake scale, and locating this thing was a complete pain in the arse unless you habitually clicked on every single part of the screen that looked slightly different. That segment has now changed so that when you click on the general area you get a zoomed in view that you can pan around, which makes finding the sodding thing a whole lot easier.

The Grace/Gabriel banter is still good enough that I was tempted to use every screenshot in this preview to just show you one of their full conversations.

The hint system is also a welcome addition. The original Gabriel Knight is pretty well-known for its logical, sensible puzzles, but its “day” structure means that the game is ever-so-slightly freeform. There are a fair few puzzles to solve and clues to find that you can actually access right from the start, but which don’t need to be solved until much later in the game. As you can’t progress to the next day until everything essential has been done, though, it can sometimes be a little confusing as to what you’ve missed, and which of the remaining puzzles you need to focus on. So yes, having a hint system in place to guide you on what has to be done to end the day is nice.

I’m not sure, but there may also have been some restructuring. One of the very first things I’d normally do in a playthrough is visit Grandma Knight’s house, both because it’s one of the few places that feels safe throughout the entire game, and because there is an unbelievably awful puzzle there and I always wanted to get it out of the way just in case I suffered some sort of head injury and forgot how to solve it. In the preview build, though, that’s not a location I can visit. I’m not sure if that’s because it’s not in the build, or if you can only go there later (because there are already a lot of unnecessary locations you can visit on day one), or what.

Other than hints and behind-the-scenes bits and bobs, you’ve also got a journal to help you keep up with what’s happening.

So yeah. It looks lovely. The re-done music is really nice. There are a couple of changes to puzzles and locations that make some of the early game’s obtuse puzzles a little less so. There’s a hint system to provide guidance, if needed. So let’s talk about the stuff I absolutely cannot judge, by which I mean the voice acting.

The original Gabriel Knight had an utterly stellar voice cast. Tim Curry played Knight in an impossible way that was somehow both charming and sleazy (and with an, uh, amazing attempt at an accent); Mark Hamill managed the out-of-his-depth Detective Mosely with aplomb; Leah Remini got across Grace’s snark and frustration while retaining caring undertones. The late Mary Kay Bergman and Efram Zimbalist Jr. did sterling work in their respective roles. Etc.

The remake does not have these voice actors. With two the overriding factor is obviously that they’re no longer with us; with the former lot, it might be a matter of cost, interest, other commitments, or all sorts of other possibilities. Whatever the reasons might be, there’s an entirely new voice cast, and I simply cannot tell you whether they’re any good or not.

Gabriel’s adventure takes him through pretty much every class of society, right the way up to the highest of the high.

The problem is that I’ve played Gabriel Knight so much that I know how most of the dialogue sounds. I remember it so well that I can remember, in lots and lots of lines, which syllables Tim Curry emphasises. When I hear “What can you tell me about Voodoo?” coming from someone else, I’m not thinking about whether it’s better or worse or good or bad. All I think is “No, that’s wrong.” I’ve tried, I promise.

This is why I’m finding myself uniquely incapable of properly judging this preview build. It might sound minor, but the change to the voice cast is a big change because of just how damn good it was before. This is a script that needs rock-solid voice acting, too, because a few scenes will absolutely change in tone if they’re done badly. And no, I can’t say more without spoiling. The more incidental voice actors seem pretty great (the groundskeeper at the cemetery, for instance), at least; it’s the main cast I’m finding it hard to judge fairly.

There are little behind-the-scenes bits for each location, which will apparently be expanded a lot more in the full version with things like audio interviews.

What I will say, though, is this: I would not have a problem playing through the game with the current voice actors – it’s not like I was forcing myself to go through the preview build. I was just enjoying exploring it, seeing the re-designed environments, chatting to people, and immersing myself in the story again. Even though it’s not Tim Curry and Mark Hamill and Michael Dorn etc. the raw game itself is still as solid as I remember, the updated graphics are gorgeous, and I’m curious to see what puzzles have been tweaked. I mean, there are now a few locations outside the police station, and I can see a few ways they might tie into puzzles I remember…

Gabriel Knight fans, be cautiously optimistic. Those of you who haven’t played the original, keep your fingers crossed for an updated version of one of the best adventures of all time.

By A.K Rahming17 hours ago
Previews