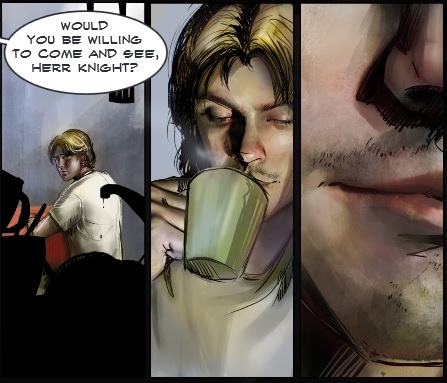 Gabriel Knight short story The Temptation is being turned into a digital comic, and the first issue is now available for free.

Back before the rather good remake of Gabriel Knight: Sins of the Fathers launched, Phoenix Online Studios had a countdown of little freebies and surprises, one of which was Gabriel Knight: The Temptation – a new short story written by series creator Jane Jensen, set after the third game. Welp, that’s now being turned into a digital comic.

The first issue (of three) is now available, completely free. The impression I get is that the entire thing will be free but it’s a little hard to say for sure – the official line is “To celebrate the 21st Anniversary of Gabriel Knight: Sins of the Fathers we are releasing chapter 1 of ‘The Temptation’ comic book for free.” So, uh, I guess the next two might be for sale. I’m unclear. (UPDATE: Phoenix Online have told us that all three issues will be completely free.)

It’s not overly long, but it’s pleasantly familiar if you remember the comics bundled with the earlier Gabriel Knight games, so it’s probably worth a look if you’re fan of the series. Obviously, though, it’s set after the third game, so if you’re planning on playing that any time soon you might want to be wary of spoilers.

You can find the comic linked from Phoenix Online’s blog post here.